On the Trail in Greece: The Mycenaean Civilization at the National Archaeological Museum of Athens 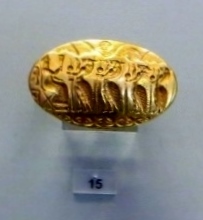 The Mycenaean Exhibit at the National Archaeological Museum in Athens has the richest and most important finds of its kind. Guide Antony Fragopoulos of a 2016 Classical Greece Tour with his driver George and Matina Choutala with her driver Kosta of a 2015 Macedonian Tour sponsored by Dolphin Hellas, Athens, was the motivation to visit the museum. The Exhibit descriptions reveal that “the treasures are rich in gold. Its radiance reached from Asia Minor, the Middle East, and Egypt to the Western Mediterranean and North West Europe. The earlier Minoan civilization of Crete, which was at its height in the 16th century BC deeply, influenced the development of Mycenaean Culture. Together they constitute the first two great European civilizations…a ruling class of warriors with the king at the top maintained archives written on clay tablets in the linear script, the first Greek writing.”

“The collapse came at the end of the 13th century B.C., soon after the Trojan War. Possible causes are social upheavals, weakening economies due to migrations of the “Sea Peoples” in the Mediterranean which destroyed the centers of Asia and the Middle East, and severe earthquakes by archaeological excavations.”1

After seeing Mycenae with the cyclopedian wall, tombs and Treasury of Atreus beehive tombs, a visit to the National Archaeological Museum enhances an understanding of Argolida (land of the Mycenaeans). The ritual vases from Grave Circle A have bull heads. This is the influence of Cretan workshops. The bull symbolizes vital power and fertility. The frescoes are similar to Knossos, Crete. The gold from the women in Grave Circle A shows diadems, gold floral ornaments, pendants and precious items.

A unique plaster head of a woman, probably a Goddess, from the Acropolis of Mycenae, is one of the few examples of monumental Mycenaean plaster art. The oval face, large, expressive eyes and long nose are facial characteristics seen in today’s Greek woman. Take a good look at the Modern Mycenae woman. A person is transported back to the women of 15th century Mycenae.

The most famous artifact of Grave Circle A is the death mask. Some call it the “mask of Agamemnon”. A c is the largest Mycenaean ring known. A procession of lion headed daemons holding libation jugs, moving towards an enthroned goddess is portrayed. The ring is from the 15th century. The Mycenae ruins and Schliemann’s gold treasure is more impressive than the marble column ruins of a thousand years later.

The Mycenaean excursion conducted by guide Antony Fragopoulos of my 2016 Classical Greece Tour sponsored by Dolphin Hellas, Athens was impressive. Classical places do not change. Guides, bus drivers and excursion participants project a new attitude. The intense enthusiasm of the Florence Italy group with lively, bilingual English/Italian guide Antony awaken a new way of looking at Mycenae, by visiting the Athens museum. “The National Archaeological Museum of Athens is the best in Greece,” said my 2015 guide Matina. She was right.

Photo 1 – Gold from the women in Grave Circle A.

Photo 3 – Gold from the women in Grave Circle A.

Photo 5 – Plaster head of a woman, probably a Goddess.

Photo 6 – Plaster head of a woman, probably a Goddess.

Archbishop Elpidophoros responds to the unjust slaying of George Floyd

Archbishop Elpidophoros Issues Statement on George Floyd New York – On Friday, May 29, 2020, in response to the growing tensions across the country, His...
Read more
Church

On Monday, June 1, His Eminence Metropolitan Nathanael of Chicago made the following statement:Like so many of you, it was with heartache, confusion and...
Read more
Opinions / Απόψεις