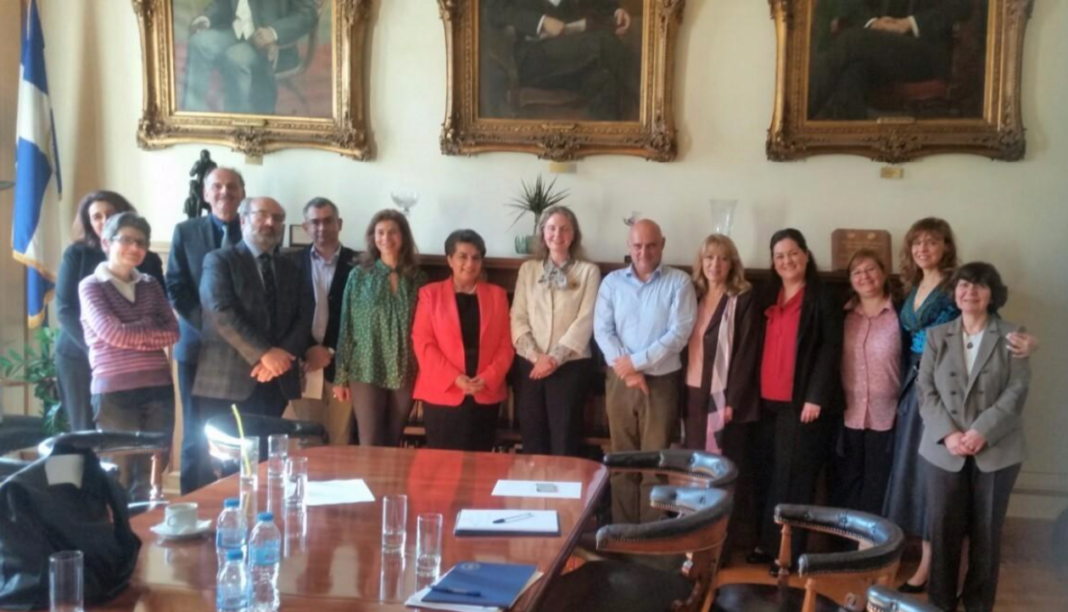 NKUA Rector, Professor M.-A. Dimopoulos welcomed the delegation, together with Vice Rector, Professor D. Karadimas, and the following professors from the School of Philosophy and the Steering Committee of the new English-language undergraduate program “BA Program in the Archaeology, History, and Literature of Ancient Greece:” E. Karamalengou (President of the Committee), A. Papathomas (Member of the Committee and President of the Department of Philology), D. Plantzos, G. Vavouranakis and S. Papaioannou (Members of the Committee), Professor A. Gena (Member of the State Scholarships Foundation Board of Directors), as well as executives from the University’s Directorates of Public Relations & History and of Education & Research.

The agenda included, among other topics, issues such as the presentation and promotion of the new English-language undergraduate program, NKUA’s international relations with U.S. universities, as well as priorities and actions in the field of higher education, including the framework that was set during the 2019 U.S. – Greek Strategic Dialogue on October 7.

Welcoming the delegation, the Rector briefly outlined the basic framework for the operation of the new English-language undergraduate program and mentioned the particularly positive reactions among foreign Ambassadors to the program, as well as by the Minister of Education and Religion, Ms. N. Kerameus, who, during her last visit to the United States of America, presented the program to institutions of the Diaspora, to the Archbishop of America, and others. As Prof. Dimopoulos said, following the Minister’s discussions with Mr. A. Goodman, the Executive Director of the Institute of International Education, Ms. Karamalengou and Ms. Gena have launched discussions with his office, as well, and described their actions during the meeting.

Details about the program and answers to the delegation’s related questions were then provided by the President and Members of the Steering Committee. A discussion followed on outreach activities for the program, interest in the program from second and third generation expatriates living in the United States, as well as scholarship incentives for U.S. students to study at NKUA.

Subsequently, the Vice Rector presented the University’s undergraduate and postgraduate programs, as well as its international collaborations with U.S. universities at the level of student and faculty exchanges. He also talked about the U.S. faculty members that NKUA hosts through the Visiting Professor program, as well as the NKUA researchers and professors who are often Visiting Professors at U.S. universities. Finally, he mentioned that the University of Athens participates in the Greek Diaspora Fellowship Program, implemented by the Institute of International Education (IIE) and the Fulbright Foundation in Greece, with the support of the Stavros Niarchos Foundation.

The Embassy’s Cultural Attaché, Ms. Schueler, referred to the particular interest of the Embassy and the U.S. Government in enhancing cooperation between the two countries’ higher education institutions. Their aim is to enhance prospects for collaboration under this new undergraduate program, which is an important step for further educational exchanges. A discussion on educational activities and initiatives for education in the context of the Strategic Dialogue followed.

Fulbright’s Executive Director, Ms. Zenetou, then referred to the Fulbright Foundation’s ongoing support through scholarships, and in particular the scholarships awarded to NKUA Faculty, PhD candidates, and postgraduate students during the 2019-20 academic year, to travel to the United States. This also includes scholarships for U.S. professors to conduct cooperative research projects with NKUA professors. She suggested different opportunities to promote the new program, such as announcing it on the Foundation’s social media platforms and in its newsletter for the next scholarship cycle, welcoming U.S. Students to apply and inviting U.S. professors to teach in the program; and promoting it through Archeological Institutes. She also invited the attendees to join the event on Greek Diaspora Fellowship Program at SNFCC on November 11th.