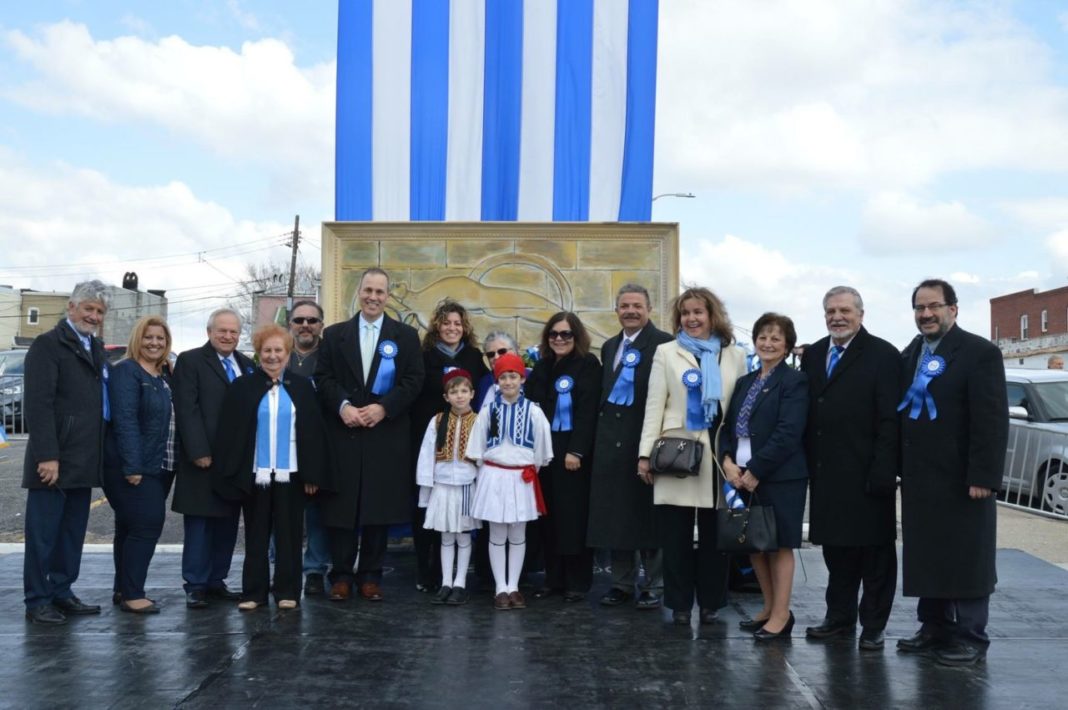 Special to the  Hellenic News of America

Greek-Americans of the Diaspora of Maryland, Washington D.C. and Virginia ignored the snow flurries that surprised everyone on Sunday, March 25, 2018 and began gathering in Baltimore’s Greektown to celebrate and honor our ancestors’ sacrifices to preserve the ideals of Freedom and Democracy in the Revolution of 1821 with the annual Greek Independence Day Parade.

Celebrations of both the Annunciation and Greek Independence Day began early in the morning with the reverent Doxology at the St. Nicholas Greek Orthodox Church of Baltimore in the presence of the Evzones, the honorary guests and dignitaries of both the Greek and Cypriot Embassies, which included the Greek Embassy Consular Michalis Stamatis, the Cypriot Embassy Consular Konstantinos Prokopiou, the Military Defence Attaché, Lt. Colonel Panagiotis Kavidopoulos, along with the Hellenic Attachés of the Army, Navy and Airforce as well as local and state officials. Also in attendance were the Attachés of the Embassy of Serbia and the Embassy of Montenagro, who both being Orthodox Christians also celebrate the Annunciation but were also among the regions who gained their independence from Ottoman Rule just as the Greeks did around 1821. A beautiful luncheon hosted by Xenos Kohilas was followed at Ikaros Restaurant and attended by US Senator Ben Cardin, US Congressman John Sarbanes, former US Senator Paul Sarbanes, State Delegate Brooke Lierman, Baltimore Mayor Catherine E. Pugh and other Maryland State and Baltimore Councilmen and Councilwomen as well as members of the media, including our own Paul Kotrotsios representing the Hellenic News of America who along with Antenna Satellite were Media Sponsors of this year’s Maryland Independence Day Parade.

The ceremonies began with prayer by Rev. Father Eleftherios Plevrakis, followed by the Greek National Anthem and the National Anthem of the United States of America sung by Stefanos Niktas and Maria Pearce, respectively. With the beautiful melodious sounds of the Hellenic Philharmonic Society Band of New York under the direction of Spiros Svolakos in the background, spectators watched, chocking back tears of Greek pride as the parade began making its way through the streets of Greektown led by this year’s Grand Marshal, Governor of AHEPA Capital District #3.

The groups, which included the Greek Schools, Dance Troupes and parish members from over a dozen Greek Orthodox Churches of Maryland, Washington DC and Virginia were dressed in their ethnic costumes and the coveted colours, blue and white, waving their Greek flags and celebrating the ideals of Freedom and Democracy. Representatives of chapters of the AHEPA and Daughters of Penelope along with the many societies of various regions and islands of Greece also participated in displaying their pride in their heritage.

Especially beautiful were this year’s floats, one of  which included the young ladies that represented each Region of Greece, as well the young ladies, Mia Chrissomalis as “LIBERTY” Katerian Lagadinos as “ELLAS” and Dimitra Duni as “MARYLAND” but also the float “MACEDONIA IS GREECE” reminding everyone that Alexander the Great was Greek and his Empire was a well distinguished Greek empire and that no one can change history in order for any region or state outside of Greece to lay claim to the name Macedonia as their own.  Following close behind, George Lagadinos, dressed as the iconic heroic figure of 1821, General Thodoros Kolokotronis, turned to salute the clergy, military attachés and dignitaries, as did the beautiful white horse he gallantly rode on, compliments of the great patrons of the parade, the Korologos Brothers, leaving everyone in awe.

The epilogue of the Parade was the somber march of a group of young men from Maryland, (Stelios Anastasiadis, Michalis Angelos, Michael Cejpek, Giorgos Diakogeorgiou, Christoforos Fekos, Antonis Giorgakis, Manolis Giorgakis, Arkadius Gluszcz, Evangelos Harrison, Dimitris Kostrivas, Vasilios Lioreisis, Marios Niotis, Nikos Patrikios, Vasilios Philippou, Vasilios Protopapas, Argiris Stakias, Stelios Stakias) who trained for many months under the supervision of Stavros Katsas, who was a Sergeant of the Hellenic Presidential Guard, to offer the spectators a depiction of the ceremonies performed by the historical elite light infantry, also known as the Evzones. The ceremony concluded with the Laying of the Wreaths by the Greek Orthodox Clergy of Maryland, by Michalis Stamatis, Consul of the Embassy of Greece, Konstantinos Polykarpou, Consul of the Embassy of Cyprus, along with all the Military Attachés present, and by Baltimore City Mayor Catherine E. Pugh and Baltimore City Councilman Zeke Cohen, and former US Senator Paul Sarbanes, as well as all the members of the Maryland Greek Independence Day Parade Committee.

Finally the “Paul Sarbanes Public Service Award,” was presented by Former US State Senator Paul Sarbanes to this year’s parade committee recipient and Master of Ceremonies, George A. Stakias, for his tireless efforts since 1997 in making such a festive celebration possible. He humbly accepted, but not without acknowledging that the success of the parade could not only be possible by the hard work and dedication of the entire Maryland Greek Independence Day Parade Committee, but with the great attendance enthusiasm of all the participants and spectators as well as he bid everyone farewell until next year.