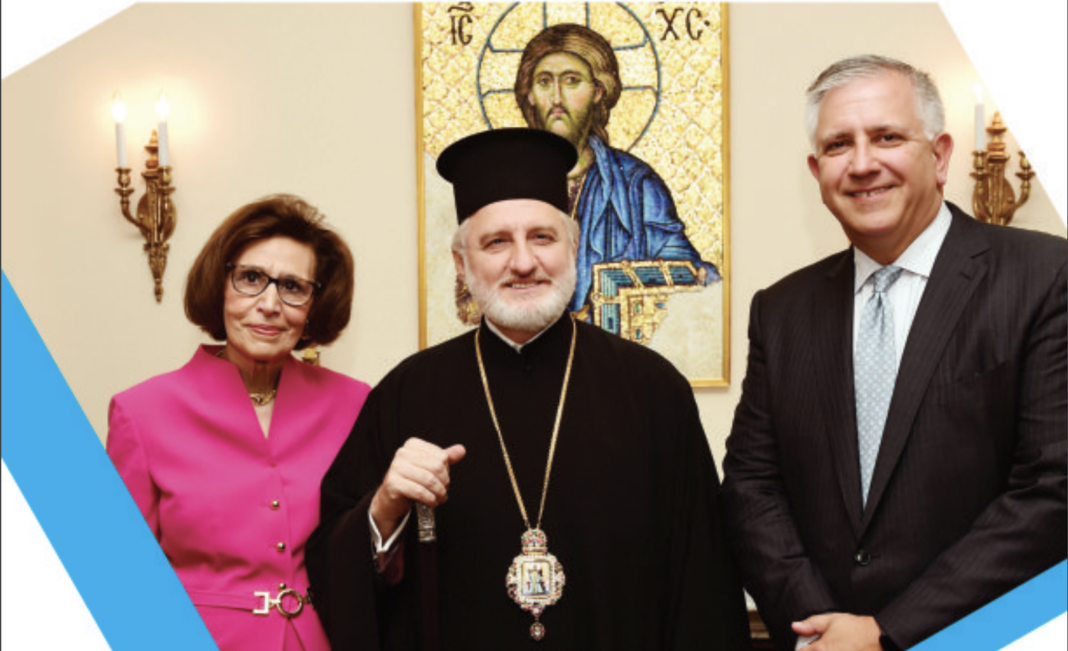 The 29th Annual Leadership 100 Conference, which will convene February 20-23, 2020, at The Breakers in Palm Beach, attended for the first time by His Eminence Archbishop Elpidophoros of America, will present a full program, with additional speakers, according to Argyris Vassiliou, Chairman of Leadership 100.

The Saturday, February 22 events will include a Brunch and Special Forum at which Bousis, Mistras and Stephanopoulos will serve on The New Entrepreneurs panel, Golf and Tennis Tournaments and Awards, and a Walk/Run event. The Grand Banquet at which the Archbishop lakovos Leadership 100 Award for Excellence will be presented will take place on Saturday evening. The Hierarchical Divine Liturgy will be celebrated on Sunday, February 23 at Saint Mark Church in Boca Raton.

Kratsios, who has served in the White House Office of Science and Technology Policy since March 2017, was confirmed by unanimous voice vote by the U.S. Senate on August 1, 2019.

During the confirmation hearing held the prior week, Kratsios expressed an intention to continue with the kind of work he’s been doing for the past two-and-a-half years. “From the start, I united OSTP around a clear mission: ensure continued American leadership in emerging technologies,” he said.

“Our goals are bipartisan. We all want American innovation, built by American workers and underpinned by American values, to lead the world, increasing our prosperity, enhancing our security and raising our quality of life in the process,” something he said that as U.S. CTO, he “can ultimately chart the path to accomplish this.”

Tassopoulos graduated in 1981 as valedictorian from Oglethorpe University in Atlanta, Georgia with a bachelor’s degree in history and political science. He received his Master of Business Administration from Georgetown University in Washington, DC, in 1983, where he was recognized with the Graduate School Service Award.

Fr. Jim was born and raised in Minneapolis, Minnesota.  At St. Mary’s Greek Orthodox Church in Minneapolis, under the spiritual leadership of Fr. Anthony Coniaris, he served in many capacities. In his youth he attended Sunday School and served as altar boy. As an adult, Fr. Jim served on the parish council including two years as president. He also served the parish as Bible Study leader, camp counselor, IOCC coordinator, Festival Co-Chair and Stewardship Committee Chair.

Fr Jim has BA-Psychology (1979) and MBA-Finance (1983) degrees from the University of Minnesota. Following twelve years in the financial services industry, he entered Holy Cross Greek Orthodox School of Theology, receiving his Master of Divinity degree in 1999.  He was ordained to the Diaconate in 1998 and to the Priesthood in 1999.  He has served at St. Demetrios Church in Jamaica, NY and Archangel Michael Church in Roslyn Heights, NY. Fr. Jim was appointed Director of the newly formed Department of Outreach & Evangelism in January of 2003. In 2009 Stewardship Ministry was added to his responsibilities.

Philip Nicozisis, a longtime member of Leadership 100 and best-selling author, who owns and operates a family commercial real estate business spanning five states, is the author of Have Laptop, Will Travel: Memoirs of A Digital Nomad, which was number one in seven countries in 2019. He is also a public speaker and activist on his vegan lifestyle, credentialed as a health educator from the Hippocrates Health Institute in West Palm Beach, Florida. His lectures have taken him to 20 countries around the world.

George Bousis, a member of Leadership 100, is Founder and Executive Chairman, Raise, and Owner and Chairman, Riot Squad Esports; Doretta Mistras, also a member of Leadership 100, is Managing Director in the Healthcare Investment Banking Division of Citigroup, based in New York; and Athan Stephanopoulos, President of NowThis, the leading digital media news brand known for producing and distributing short-form video news for a predominantly millennial and Gen Z audience.