AHEPA commemorates Philhellene John M. Allen in Annapolis for his efforts in Greek War of Independence 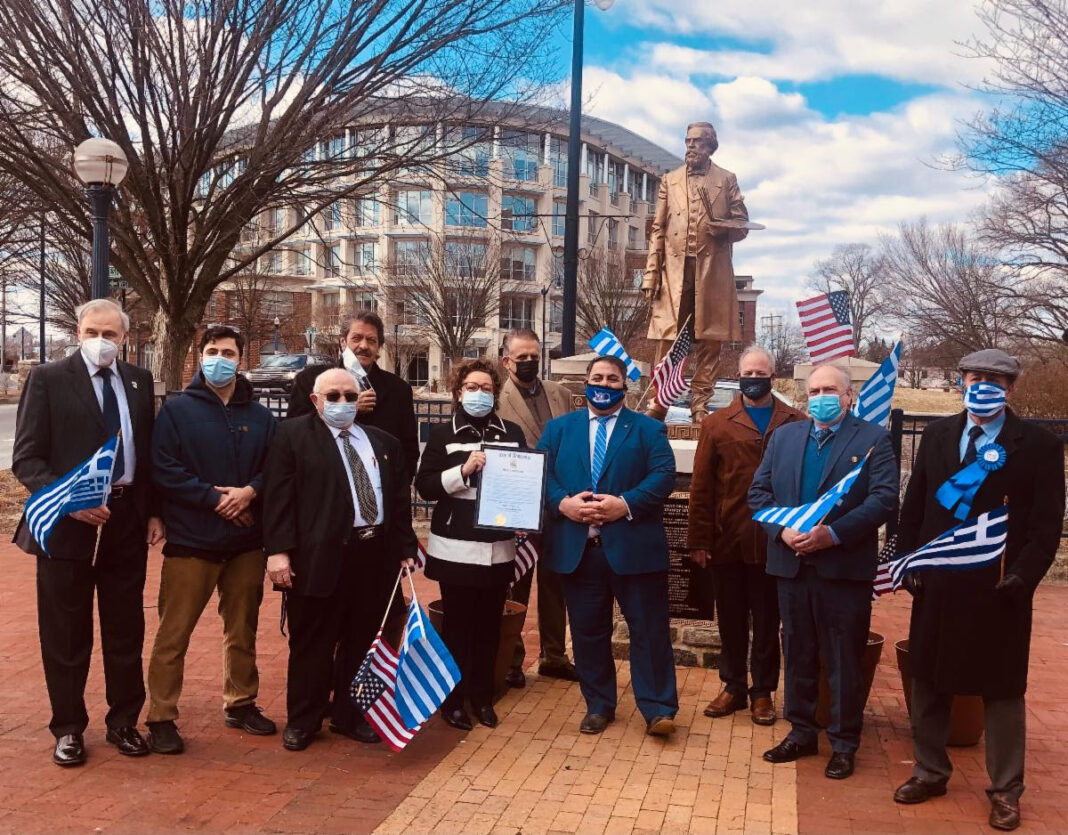 On Saturday, March 6, 2021, AHEPA continued in its campaign celebrating the Greek Bicentennial in Annapolis, MD. Annapolis’ Greek name is in honor of Queen Anne of England. A historic city of the Washington-Baltimore Metropolitan area, the City has great significance for the Greek American community.
AHEPA Supreme President George Horiates, along with members of the AHEPA Capital district lodge and chapters from Washington through to Baltimore attended the event held at the site of the Constantino Brumidi statue. The statue of the architect of the capital was dedicated in 2019.
In the 110th Congress, the AHEPA family worked in cooperation with Italian American organizations to award posthumously a Congressional Gold Medal for Constantino Brumidi, the “Artist of the Capitol.” Brumidi was a great American citizen of Greek and Italian descent. His frescoes and murals can be found throughout the U.S. Capitol. Brumidi’s creations include his masterpiece, the allegorical fresco The Apotheosis of Washington, in the canopy of the Rotunda. He also painted the extensive frescoes in the Brumidi Corridors, which many believe to be the first true frescoes to be painted in this country. Brumidi’s last years were spent painting the historic scenes in the Rotunda frieze. “We found it important on many levels to celebrate the Greek Bicentennial here in Annapolis” stated Supreme President George G Horiates. “In 2012, AHEPA was responsible for a Gold medal ceremony honoring Brumidi, and received a bronze replica to record and honor  AHEPA’s efforts.”
However, AHEPA came to celebrate in Annapolis also as a tribute to the United States and Greek Navies. Particularly, it honored the work of revolutionary hero John M. Allen, a midshipman of the United States Navy. Mr. Allen was one of many American philhellenes that went to Greece to assist the struggle for Greek Independence. He served on Greek ships which blocked the port of Souda, Crete, and was wounded in 1825 during the siege of Missolonghi while fighting with the Greek fleet. “Annapolis is not only the capital of Maryland but has the distinction of being the home of the United States Naval Academy,” stated the Supreme President.
Also in attendance was Annapolis City Councilmember Sheila M. Finlayson. Her honor presented and read a proclamation on behalf of Mayor Gavin Buckley. The Proclamation was in honor of Greek Independence as well as the region’s contributions to the Greek cause. “It is important for the public to understand this region’s assistance to the Greek committees of the 1820’s as well as our continuing relationship with Greece” stated Ms. Finlayson. “Annapolis thanks the Order of AHEPA for never forgetting and promoting the relationship between this region and Greece and the love for liberty we, and philhellene John M. Allen, had in common with the Greek nation.”
AHEPA Supreme President George Horiates presented Ms. Finlayson the AHEPA Medal of Honor for her efforts in fighting the current pandemic and for Annapolis’ efforts in allowing this social distanced affair to occur.
“John M. Allen, like so many others, was a true defender of Hellenism” stated the Supreme President. Thus, the AHEPA Greek Bicentennial Annapolis celebration also was met with recitals of many of John M. Allen’s accounts of the Greek War of Independence sent to America to convince Americans to assist the cause of Greek Independence.
The following appeal written by Mr. Allen appeared in American newspapers on October 10, 1826:
Dear Sir:
Our affairs in Greece at the present are very bad; but I hope they will change for the better soon. We are almost deserted by the whole world; but union and perseverance will save us yet. God will be merciful to Christians struggling for their independence, although deserted by the whole world. As for my part, I am devoted to the cause, and let Greece fail or flourish, I remain with her. Do, my dear sir, urge our countrymen to assist in some more substantial manner…God knows they are worthy of our aid.
JOHN M. ALLEN
AHEPA will continue providing these timely remembrances and stories that need to be told, commemorating the brave Greeks and their friends that fought for freedom 200 years ago.
Share
Facebook
Twitter
Pinterest
WhatsApp
Linkedin
Email
Viber