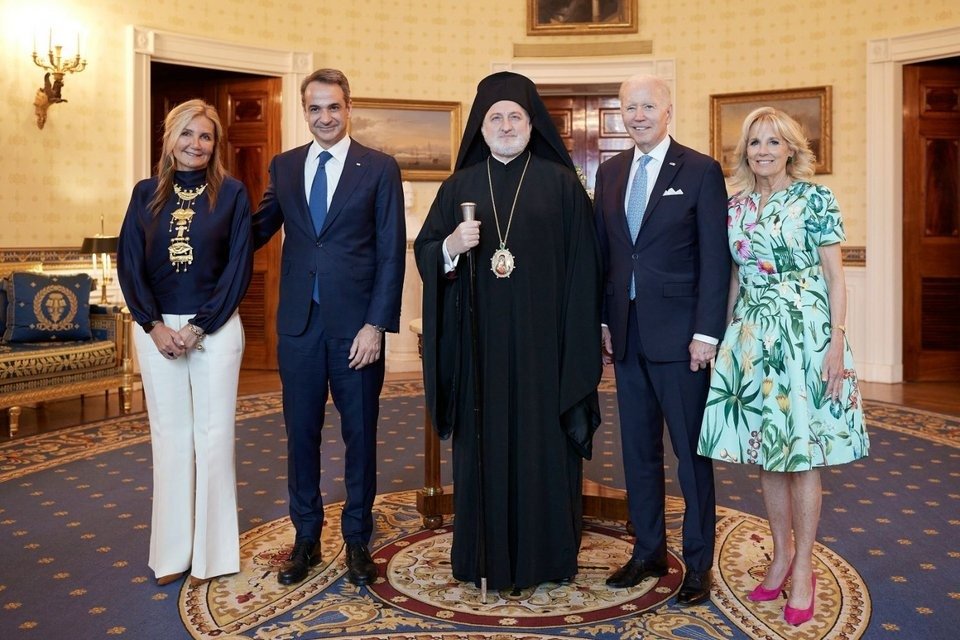 Washington, DC – On Monday, May 16, 2022, His Eminence Archbishop Elpidophoros of America participated in the Bicentennial Greek Independence celebration at the White House with President Joe Biden, First Lady Dr. Jill Biden, Prime Minister of the Hellenic Republic Kyriakos Mitsotakis, and Mrs. Mitsotakis.
In his remarks the Archbishop said, “Our joy today – to be in the presence of the leaders of the Birthplace of Democracy and the world’s greatest Democracy – commences with our Paschal greeting.
“Because here at the White House, we are celebrating the resurrection of the Greek Nation. This special commemoration of the Bicentennial of the Greek Revolution plus one, in the Year of the Centennial of the Greek Orthodox Archdiocese of America as the premier Eparchy of the Ecumenical Patriarchate of Constantinople, is an unforgettable honor to the Greek-American Community. 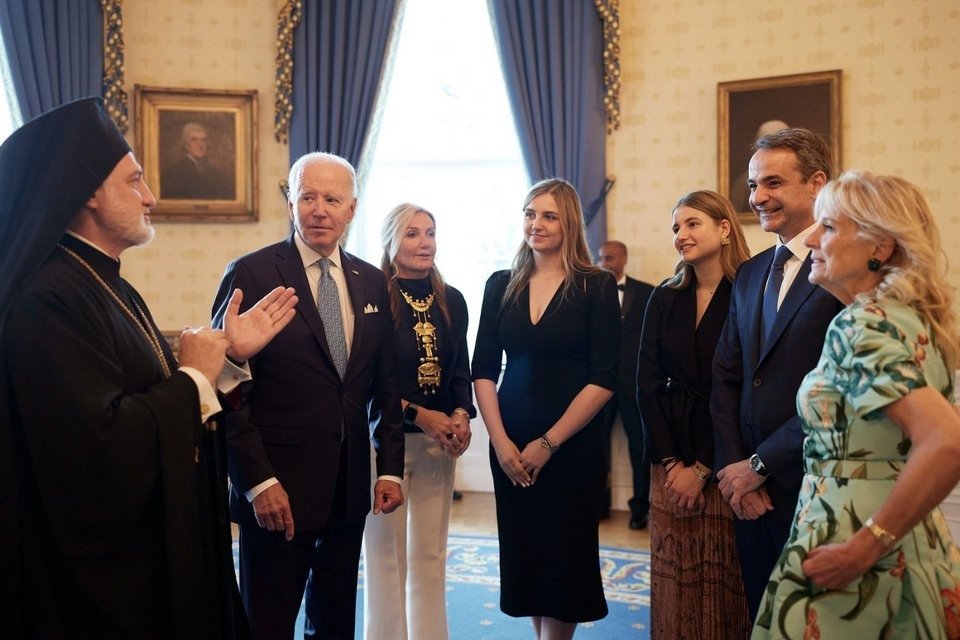 “And it is a sign to the world of the commitment to Democracy and to freedom, in a time of the rise of autocrats around the world, and the struggle to maintain national integrity against the unjust aggression in Ukraine.”
President Biden spoke next, stating that the Bicentennial of the Greek Revolution is “an opportunity to honor the history of our two nations and peoples and how we share so much together. A chance to look to the future that we are going to build again. I’m incredibly proud that the first year of my presidency was able to be the first year of the next 100 years of relations between Greece and the United States of America. It’s no exaggeration to say that today our friendship and partnership and our alliance is closer and stronger than it’s ever been.” 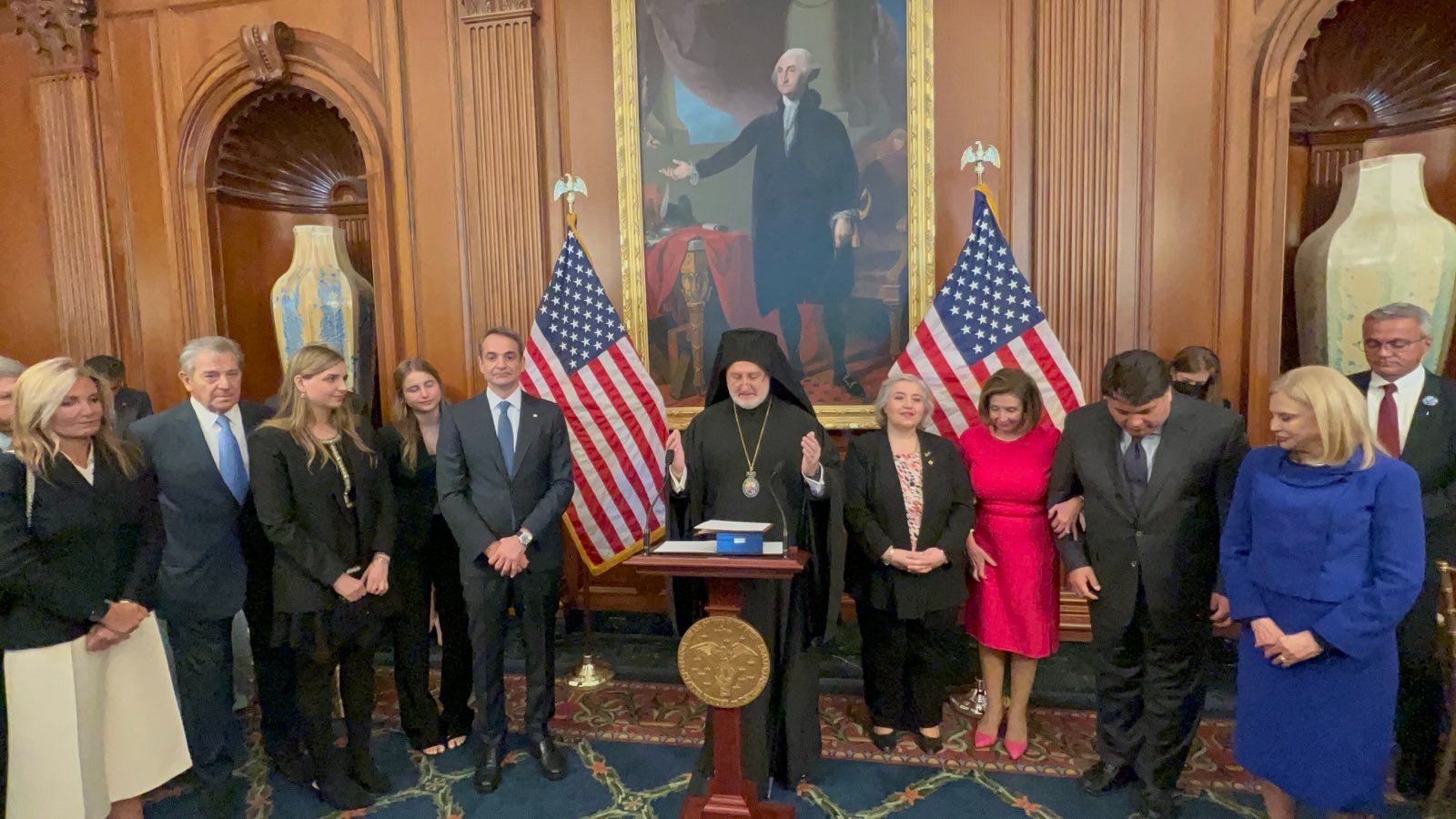 Prime Minister Mitsotakis also celebrated the shared history and strong cooperation between Greece and the United States, acknowledging that, “Recent events make this celebration that much more pertinent. The fight of democracies against autocracies is the defining battle of our generation. Αnd the proud moments from the history of our two nations give us confidence in what we can achieve in the future. We should never lose sight of what our ancestors fought for and that which we must now defend. All of us should draw great strength from their example.” 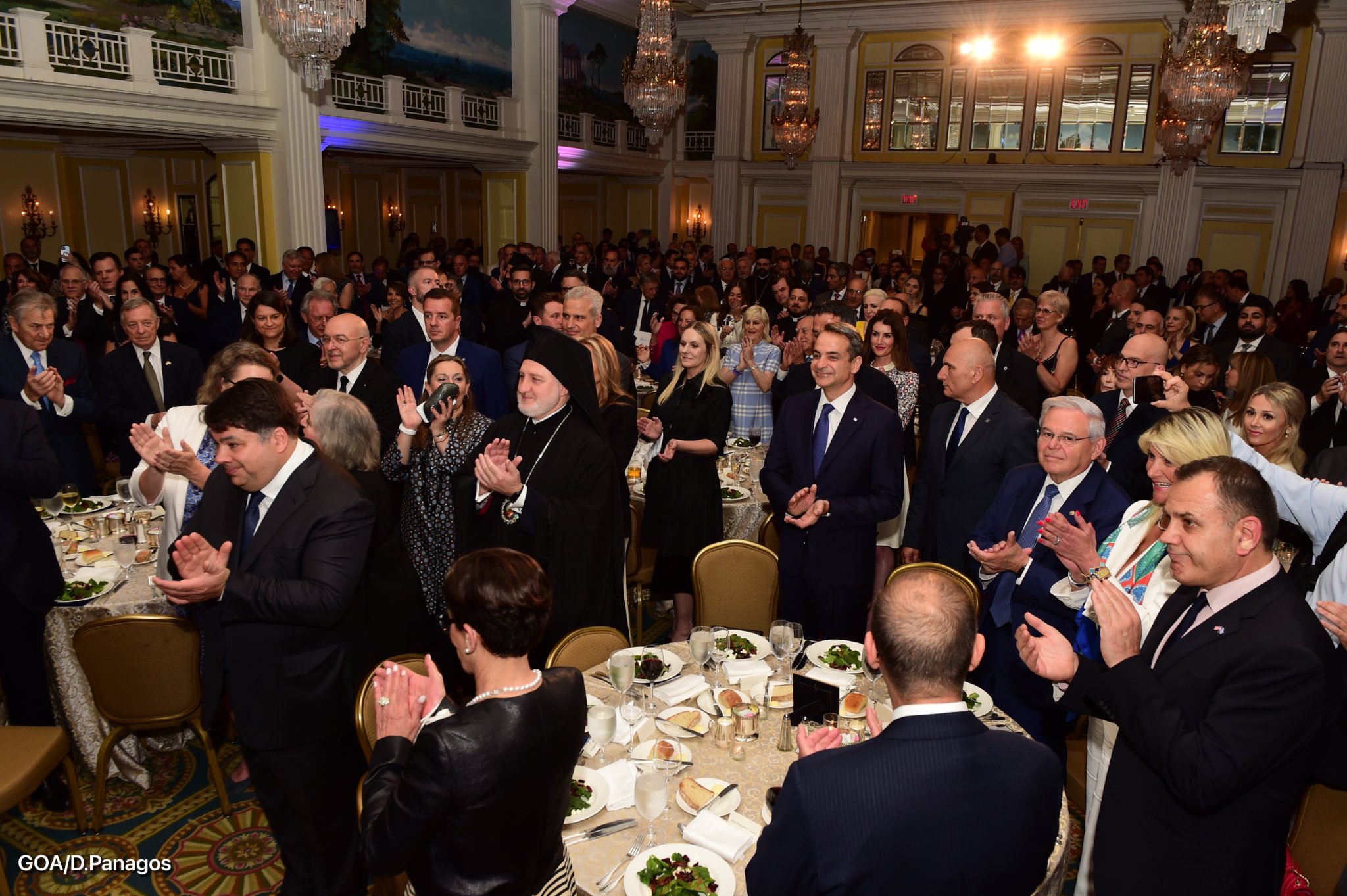 A reception followed at the White House.
The following day, Tuesday, May 17, as a guest of Speaker of the House Nancy Pelosi, Archbishop Elpidophoros attended a Joint Session of Congress, where Mr. Mitsotakis addressed members of both houses of Congress– the first Greek Prime Minister to do so in history.
His Eminence Archbishop Elpidophoros offered the blessing at the Speaker’s reception that followed and attended a dinner that evening at the Willard Intercontinental Hotel in honor of the Prime Minister and in celebration of the Bicentennial of the Greek Revolution. The dinner was hosted by key organizations of the Greek American community, including AHEPA, AHI, Federation of Cypriot American Organizations, HALC, Hellenic American National Council of North America, The Hellenic Initiative, International Coordinating Committee Justice for Cyprus, Leadership 100, National Hellenic Society, Order of Saint Andrew the Apostle and the Washington OXI Day Foundation.
Photo Credit: GOARCH / Dimitrios S. Panagos
Source: Orthodox Observer
Share
Facebook
Twitter
Pinterest
WhatsApp
Linkedin
Email
Viber