Giannis Antedokounbo at the Presidential Palace: “We have always been Greeks” 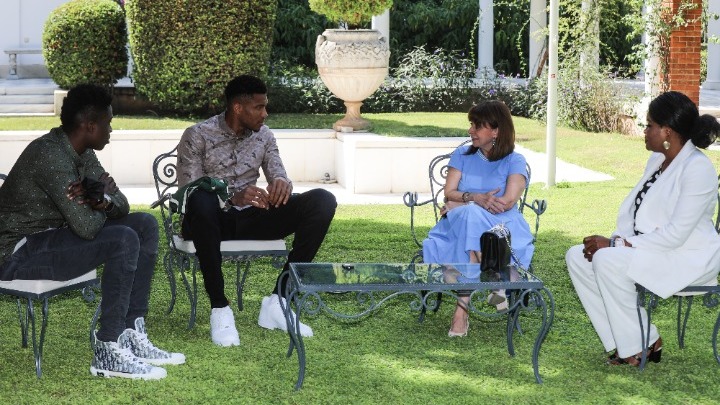 The President of the Hellenic Republic, Katerina Sakellaropoulou, had a highly symbolic meeting earlier today, as she welcomed the Antetokunbo family in the garden of the Presidential Palace, one day after their honorary naturalization and the swearing-in ceremony held at the Maximos Palace, in the presence of Prime Minister Kyriakos Mitsotakis.

The top NBA player, who was accompanied by his mother Veronica and his younger brother Alex, after thanking the President for the honor, congratulated Mrs. Sakellaropoulou for her promotion to the top State office, talking about a historic decision, setting a new course. He also stressed that Greeks have always felt, as they attended a Greek school and know the Greek language and culture, just yesterday the stamp came. In fact, he underlined that “We have always been Greeks and we always consider Greece as our homeland”, while he noted that he brings his sons and his girlfriend to Greece to go on vacation and in America it is his job and his professional obligations.

The President of the Republic described him as a model for young children and added that having his photo in their room, since the age of primary school, is a burden but one gains it, not only as an athlete, but with everything, what he states with his presence and his ethos. “This is something that one takes from one’s home and of course cultivates and grows. The love for the Homeland and the family, your offer, to those in need, these are very important things and they honor you very much and I wish you to continue, wherever you are, because your life is now shaped in America, but you are coming and often in Greece “, said Mrs. Sakellaropoulou.

Mrs. Sakellaropoulou also congratulated Mrs. Veronica, mother of the top athlete, for what she has achieved and stressed that she is rightly proud of her children today, while emphasizing that she is particularly happy for the ceremony that preceded yesterday at the Maximos Palace and for the decree she signed typically saying “You were Greeks, and you have proved it as a family”.

Then, Mrs. Sakellaropoulou was interested to learn about his younger brother Giannis Antitokoumbo, Alex, who also plays basketball, and even played for a year in Spain, while at the same time, they stressed that all four of the five Antetokunbo brothers are involved in Basketball, while Francis is interested in Music.