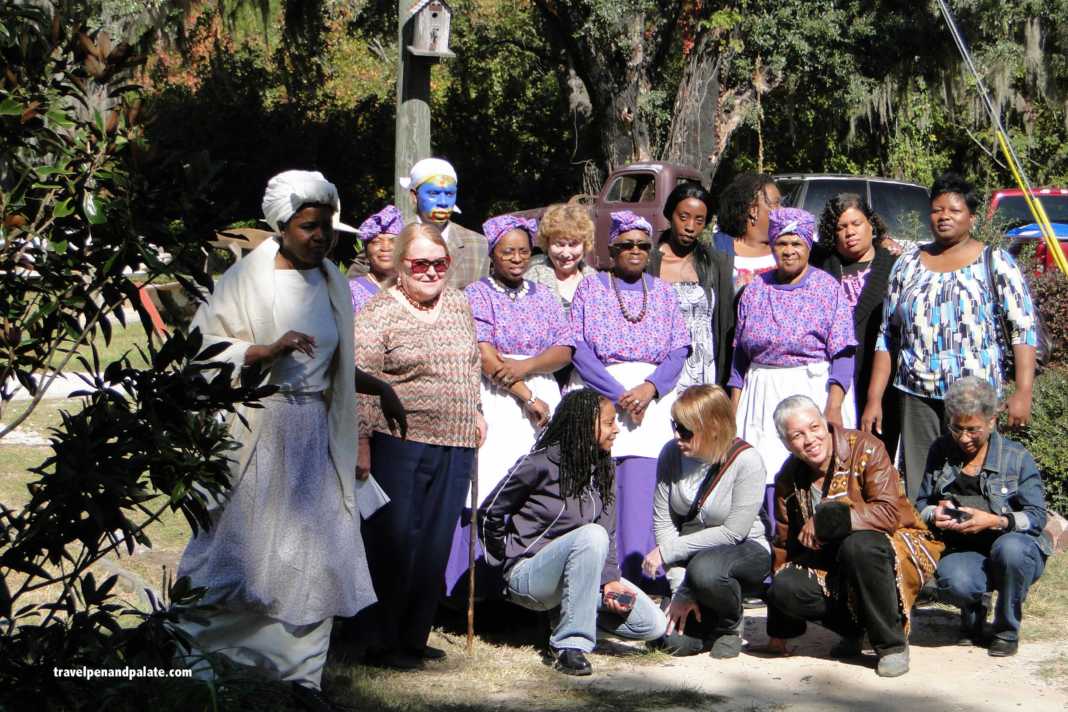 “De buckruh dey duh ‘ood duh hunt tuckrey.” Incorrect English? No, that is Gullah, “The white man is in the woods hunting turkeys.”  Gullah is the hybrid language captives from West Africa developed after being transported as slaves to the rice plantations in the English colonies in the Carolinas, Georgia and, finally, Florida. Gullah deep fried turkey is a Southern classic.

The productive plantations in what is collectively known as the Low Country and the Sea Islands brought vast wealth to their largely absentee white owners. The absence of owners allowed slave families to maintain some semblance of traditional life from the culturally rich African lands they were forced to leave. Over the years the Gullah Geechee developed a distinct patois and greatly influenced what came to be known as classic Southern cuisine.

Culinary history is peppered with backstories that illustrate the reality of regional recipes. The 18th century expulsion of French Acadians to Louisiana resulted in the Cajun patois and cuisine. The millenniums old Spice Route influenced cuisines and mixed populations from Asia through Spain, and the 1920s Exchange of Populations uprooting thousands in Greece and Turkey cemented regional variations as Greek into everyday life – the Ottoman Empire/Turkish gyro for example.

The Gullah Geechee Cultural Heritage Corridor extends from Wilmington, North Carolina in the north to Jacksonville, Florida in the south. The National Heritage Area includes roughly 80 barrier islands and adjacent coastal counties that define the United States Low Country. The Heritage Corridor is home to the Gullah of the Carolinas and the Geechee in Georgia and Florida.

Just a few miles inland from the Georgia islands of St. Simons and Jekyll – where many pre-Civil War plantations existed – is the village of Riceboro and the Geechee Kunda Cultural Center, founded by Philadelphia transplants Jim and Pat Bacote. Jim explained that the center is more than a repository of the past.

“We use culture as a vehicle for mental empowerment, intellectual liberation and spiritual healing.” Jim, who passed away in 2018, was a believer in Pan-Africanism. He told me that the mission of the Center was primarily educational to “find the common thread among African people.”

On the grounds of the Center are large, traditional and fully functional kitchen equipment including a 19th century human powered sugar cane grinding machine and huge pots for reducing the sugar cane juice into syrup. A thatched roof African roundhouse serves as a gift shop.

Having seen numerous roundhouses on a press tour of Zimbabwe I was curious to understand the reason behind the design. Jim explained that it was both esthetic and practical. The circle is a universal spiritual symbol, but in hot climates, with judicious placement of windows and openings, it aids in maximizing the cooling breeze.

Grits, collard greens, peanuts, smoked pork, beef and chicken, beans and rice are just some of the foods Americans associate with traditional southern cuisine, yet they were all introduced by the Gullah Geechee people. They are part of traditional West African cuisine. As a chef and food writer on a press tour of southern Georgia, I was most interested in discovering African culinary connections. It was no more difficult than the food placed on the tables in front of me.

Pat Bacote said, “herbs are the feel good in food,” and I couldn’t agree more. The steamed rice was fragrant with basil, garlic, nutmeg, salt, pepper and turmeric, which gave it a beautiful yellow orange hue. The black beans were studded with fresh parsley and the wood smoked beef and chicken from the outdoors barbecue were tender and mahogany brown.

Meals for large gatherings were feasts created with readily available foods. Whether just a snack or a one-dish “buffet,” the following recipes tell backstories of the Gullah Geechee, and “feel good.”

Peanuts were first cultivated by the native cultures of South and Central America and introduced to Africa by the Spanish and Portuguese. Enslaved Africans brought the legume to the English colonies of the Sea Islands and Low Country of the Carolinas and Georgia.

I’d never had boiled peanuts and yet this traditional snack is found in elegant Southern restaurants and truck stops. They’re easy to prepare and go great with cold beer.

Green raw peanuts (not roasted) are available many places in the South and on-line if in other areas of the country.

The origins of the Low Country Boil go back to the cuisine of the Gullah Geechee people of the Sea Islands along the coasts of Georgia and South Carolina. The boil was a quick and easy way to prepare a one-pot meal. It’s popular all year and is often part of Christmas celebrations.

The Geechee Girl Rice Cafe for over a dozen years (2003-2014) was Philadelphia’s premiere Low Country restaurant founded by Chef Valerie Erwin and her four sisters. Chef Erwin continues her Geechee culinary influences as part of the team running Eat Cafe, part of Drexel University’s non-profit Center for Hunger-Free Communities. Chef Erwin’s savory Blackeye Peas and Ham is the Low Country in a bowl.

Ingredients: makes 3 quarts, can be frozen.

The King and Prince Beach and Golf Resort

It was the end of a pleasant sunny Autumn day in the quiet off-season of St. Simons Island, one of Georgia’s premiere barrier island destinations. The elegant 1935 King and Prince Beach and Golf Resort, listed on the National Historic Register and Historic Hotels of America, sets a table befitting its Old World heritage. The formal place settings with an array of flatware and crystal stemware lay on starched white linen lit by softly glowing candles.

Yet the star attraction on the menu was a classic dish served in every southern diner – a dish that owes its origins to Gullah Geechee cuisine. A dish that would bring a smile to the face of any king or prince: Shrimp and Grits in Tasso Cream Sauce.

Google any of a dozen recipes for shrimp and grits and discover everything from bullion cubes to extra sharp cheddar cheese used to mask tasteless farm raised frozen shrimp mounded on top of instant grits. Believe me I’ve had my full of disappointing versions.

Quality ingredients are essential for a great dish and there is no comparison between farm raised and wild shrimp. Fortunately, much of America’s shrimp is wild and the package will be labeled appropriately. The high tides and lush nutrient rich salt marshes of low country and barrier islands provide an excellent clean environment for Georgia’s abundant shrimp. Georgia White Shrimp is especially plump, meaty and flavorful.

Yet the secret to this outstanding recipe is the addition of smoky, cured Tasso ham – an essential ingredient in much of Cajun and Low Country cuisine. Using this smoked delicacy gives this light cream sauce a rich flavor that lingers in the mouth.

The King and Prince Shrimp and Grits in Tasso Cream Sauce

– for 2 entree or 4 small plate servings

Crab Boil or Boiled Peanuts, food helps define cultural identity. Whether it’s rabbit, fried turkey or lobster on the menu, as Jim Bocate’s said, “We use culture as a vehicle for mental empowerment, intellectual liberation and spiritual healing.” That sentiment, and fine ingredients, define a people’s culinary spirit.

Special Thanks: the author was a guest of the King and Prince Resort and the Geechee Kunda Cultural Center. Arrangements were facilitated by Leigh Cort Publicity, Camille Ronay and Georgia Made Georgia Grown.