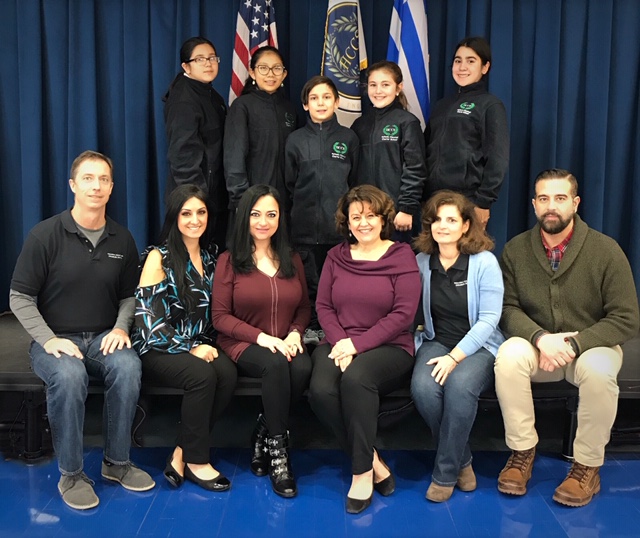 Congratulations and safe travels to the 2019 National History Day Team (NHD) of the Hellenic Classical Charter School in Brooklyn, New York. These five students will be competing in the National History Day Fair’s Junior Group Performance competition. They will be traveling to Greece to conduct their research. The students have already begun to diligently work on their research, and have already decided that under this year’s theme of “Tragedy and Triumph,” they will dedicate their performance to Hellenic immigration to the USA from the beginning of the 20th century until today.

The NHD Team will be competing this year with their focus on Louis Tikas and the Ludlow Massacre. Their topic will reflect the heroic efforts of Louis Tikas, a Cretan immigrant, who united immigrant miners of all ethnicities to join and lead a strike against the Colorado Fuel and Iron Company. The company, owned by the infamous Rockefellers, exploited miners by having them work 16-hour shifts, in dangerous, deadly coal mines, with disturbingly low wages. After hundreds of miners’ deaths on the job, Louis Tikas recruited and gathered his fellow countrymen to join the United Mine Workers of America and lead the Great Strike of 1913. The strike led to the violent backlash after the coal mining companies sent in private national guardsmen. On the day after Greek Easter in 1914, the guardsmen began shooting and set the tent colony on fire, killing men, women and children. Louis Tikas was hit over the head with a rifle and was shot three times in the back. This led to a minor revolt of guerilla warfare. The 10-day uprising called the Colorado Coalfield War was the deadliest labor movement in American history. It eventually led to the passing of the Wagner Act which created the modern-day framework for unionization.

While in Greece, they will be visiting Loutra, Crete, the hometown of Louis Tikas, on this week’s research trip. They will also be visiting Arkadi, the historical monastery in Crete that played an active role in Cretan resistance against Ottoman rule during the Cretan Revolt of 1866. This battle was an inspiration for revolt against suppression to Cretans and all Greeks alike. Good luck to the 2019 HCCS National History Day Team! GO HCCS!