CommunityHellenic Relief Foundation Distributes Easter Meals to Families in Greece for the...
Community 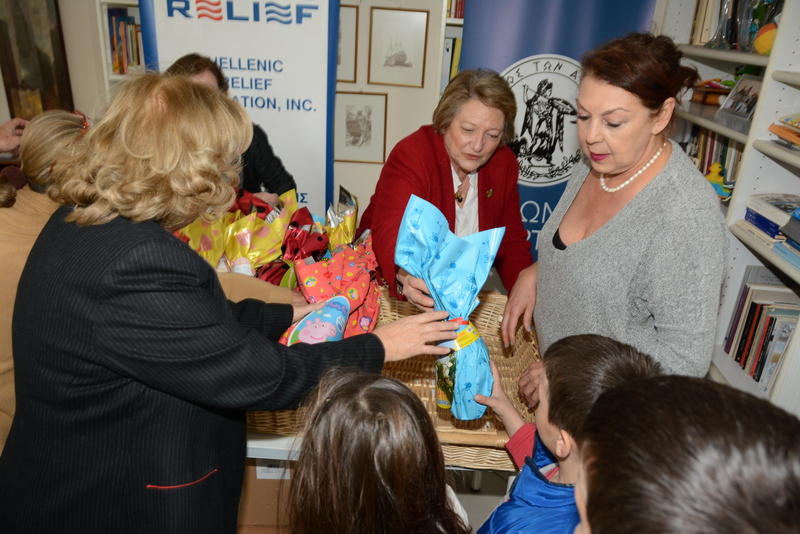 This years Easter distribution took place on Holy Wednesday, April 4th, 2018 at the offices in Athens of the Hellenic Relief Foundation and the Hellenic Volunteers Support Group. This marks the seventh festive Pascha distribution. 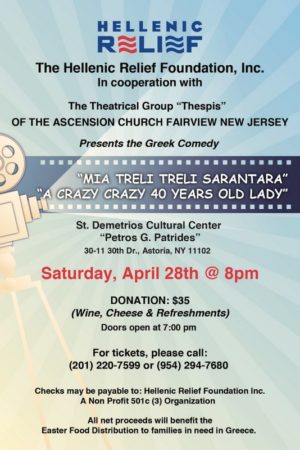 In addition to the Athens distribution, Easter packages were also delivered to Corfu, Spetses, Kalivia Thorakou, and to institutions such as the Meropio, the SOS Villages, the Specialized School of Piraeus, the TASEI, and ETE.

The Athens distribution was organized as always under direction of Maria Siourdi, and with help from our volunteers Antonia Pantouvaki, Emis Spanou, Soula  Belli, Bessie Tsikaloudaki, and the sons of our long-term sponsor Mr N. Konstantopoulos  (the Konstantopoulos Foundation) Nikolas and Aggelos. Mr. A.Papagelis was also present, representing the Athenian Society.

We also visited the Meropio foundation, where 33 women are housed, and distributed slippers, sweets, and juices. There was 21 year old Aspasia Borgi, who is going through extremely difficult times since she was shot five years ago by her father. She was given d her new clothing, food items, and other items for daily use.

On Holy Saturday the annual Easter Children Party took place at  the headquarters of Hellenic Relief Foundation and the Hellenic Volunteers Support Group in Athens with the cooperation of the Social Outlet of the Athenian Society . Present was the spouse of the President of the Hellenic Republic Mrs. Sissy Pavlopoulou.

The children of the families who receive monthly aid were invited to partake in Easter festivities. The children sampled sweets and various juices, and before they left the Volunteers provided them with new clothing, shoes, chocolate eggs, Easter candles, koulourakia, chocolates, cookies, etc. The sponsors for these items were: the clothing company Fragos SA, the Social Outlet of the Athenian Foundation, shoe companies-Parex, Meridean, Bufallo (Minoglou Plast,) the N. Konstantopoulos foundation, Coca Cola 3E, the Food Bank, Elomas, and PSBAK.

Easter distribution expenses will be covered with the proceeds from the theatrical play “A crazy crazy 40 year old lady” which will be performed by the Group “ Thespis” of the Ascension Church of Fairview New Jersey at St. Demetrios Cultural Center in Astoria, Saτurday April 28th 8 p.m.

To the entire family of Hellenic Media, in Greece and abroad, Xristos Anesti . Best Wishes.

The Hellenic Relief Foundation is a non-profit, tax-exempt (501C3) organization. It was founded in January, 2012 with the goal of raising funds in the United States to be used towards the purchase of food items, and basic necessities for the underprivileged in Greece. To date  $543,753 has been remitted to Greece, distributing products and services exceeding one million dollars in value  since local companies in Greece donate various items, supplementing the deliveries and volunteer doctors and social workers provide valuable support.

Operating expenses in New York are covered by the Board of Directors, and delivery expenses in Greece are covered mostly through a grant from the Stavros Niarchos Foundation. All donations in their entirety are used to procure food, and other items for those in need in Greece.