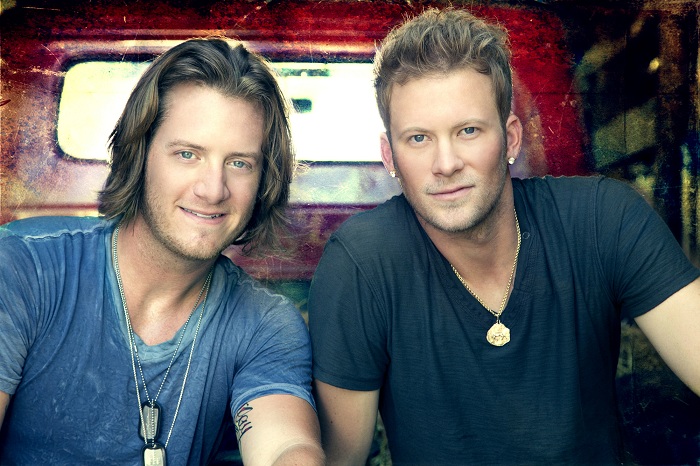 Over the past year, Florida Georgia Line has dominated the musical world with their smash single “Cruise” and with their follow-up singles they have inspired country fans to “get their shine on,” while showing them how they do things “Round Here.”

On July 18, Greek-American journalist Markos Papadatos chatted via telephone with Brian Kelley from the hit country duo Florida Georgia Line. In addition to Brian, the duo is made up of Tyler Hubbard and they met as students at Nashville’s Belmont University, where they played local clubs and wrote songs in between their college coursework.

Florida Georgia Line is signed to Republic Nashville, which is home to such country artists as The Band Perry, Cassadee Pope, Eli Young Band and Greg Bates. They were honored as this year’s Academy of my Country Music’s (ACM) “New Artist of the Year” and New Vocal Duo or Group of the Year”; moreover, they took home two CMT Music Awards for “Duo Video of the Year” and “Breakthrough Video of the Year” for “Cruise.” “That was amazing and the coolest part about it is that they were fan-voted.  Our fans are amazing and they have changed our lives. They have been loyal and passionate about our music and it has blown us away,” Brian said.

Their breakthrough single “Cruise” has stayed at the No. 1 position on the Billboard Hot Country Songs Charts for 19 weeks, which is the longest stretch for any song in the past 50 years. “That feels like a dream, it really does. Everything feels surreal right now, but we will continue to work hard and we will continue to chase our dream,” he said.

“Cruise” has also been the fastest-rising single for a new country duo since Brooks & Dunn’s “Brand New Man,” which came out two decades ago. This song has also garnered warm feedback from many of their peers in the industry, including country mega-star Taylor Swift, Keith Urban and Ed Sheeran, among others.

Their sophomore single “Get Your Shine On” also peaked at No. 1, thus making them the first act in 21 years to top the Billboard Hot Country Airplay charts with their first two singles.  “We cannot speak highly enough of our fans. They have blown us away and it is a special time for us. We are having a great time right now,” he said.

After charting for nine weeks, Florida Georgia Line’s latest radio single “Round Here” is already a Top 20 hit, which sits at No. 16 on the Billboard Hot Country Airplay Charts, for the week ending July 27. “That is just crazy. It’s great to have the video out and we are blown away by it,” he said.

Their remix for “Cruise” was a collaboration with rapper Nelly and it made its way into the Top 5 on the Billboard Hot 100 Charts, as well as in the Top 10 on the Billboard Pop Songs Charts. “That was a dream come true. Nelly is one of our big influences and we are huge fans of his. It was something that we couldn’t turn down and we are as proud as we can be of the remix,” he said.

VEVO has selected Florida Georgia Line for their LIFT Program, which offers exclusive content across the world’s leading all-premium music videos and entertainment platforms. “It is really cool to be able to share our life on the road with the fans. We are very open and I think people want to see what is going on. We are having a good time with it and it is fun for us to be able to look back on in future years,” he said.

This summer, Grainger, the leading broad line supplier of maintenance, repair and operating products, is going to sponsor 20 of their concerts and at every tour stop they will celebrate industrial trades professionals by honoring “Grainger Tools for Tomorrow” scholarship program recipients. “They have a great scholarship program which is really making a difference in the workplace today. This is something we believe in and we are really passionate about. I think we are going to have a long-lasting relationship with them,” he said.

After opening for such artists as Taylor Swift on her “Red” tour and Luke Bryan on his “Dirt Road Diaries” tour, the duo is expected to headline their first “Here’s to the Good Times” tour this fall, where one of the stops will be at New York City’s Best Buy Theater on November 15. “That is another dream come true for us and it happened quicker than we thought it would. We are ready to rock and we are excited each day since it is getting closer. I think it’s going to be a big party,” he acknowledged.

They will also be a part of “Vets Rock” on September 7, which will take place at the Pennysaver Amphitheater in Farmingville, New York, where they will share the stage with Love and Theft, Thompson Square, Joel Crouse and Brantley Gilbert.

A native of Ormond Beach, Florida, Brian noted that he would love to someday collaborate with one of his greatest musical influences, Garth Brooks, as his dream collaboration choice.

For more information on Florida Georgia Line, their music and tour dates, be sure to visit their official website: www.floridageorgialine.com.