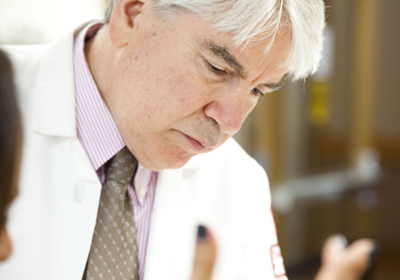 Director of Temple Lung Center Serves as Guideline Chair
(Glenview, IL) – The American College of Chest Physicians (CHEST) and the Canadian Thoracic Society (CTS) announced today the release of Prevention of Acute Exacerbation of Chronic Obstructive Pulmonary Disease: American College of Chest Physicians and Canadian Thoracic Society Guideline in the journal CHEST. The guideline, a first of its kind, provides evidence-based recommendations aimed at prevention of COPD exacerbations, which can cause frequent hospital readmissions, death during or after a hospital stay, and can potentially greatly reduce the quality of life for patients along with carrying a heavy financial burden.

Gerard J. Criner, MD, FACP, FACCP, Professor of Medicine at Temple University School of Medicine, and Director of the Temple Lung Center, is Guideline Chair. “According to the CDC, in 2010, the U.S. cost for COPD was projected to be approximately $49.9 billion, and a study in the journal Respiratory Medicine reported that hospitalizations due to exacerbations account for more than 50% of the cost of managing COPD in North America and Europe,” says Dr. Criner, who is also a CHEST member. “COPD is the third-leading cause of death in the United States and the fourth-leading cause of death in Canada. Our work in preventing exacerbations will help to improve the quality of lives for the millions living with this chronic condition. We hope it will also ease the financial burden associated with COPD.”

The guidelines address old and new pharmacological and nonpharmacological therapies available for prevention of COPD exacerbations and address the void, which had previously existed in the management of the care of patients suffering from COPD.

COPD Facts:
· COPD is a lung disease characterized by chronic obstruction of lung airflow that interferes with normal breathing and is not fully reversible (source: World Health Organization).

· People with COPD are likely to experience acute episodes called exacerbations, during which their symptoms become worse or persist for days or longer (source: Mayo Clinic).

· Current COPD guidelines state that prevention of exacerbations is possible; little guidance is provided to the clinician regarding current available therapies for prevention of COPD exacerbations. Acute Exacerbation of Chronic Obstructive Pulmonary Disease: American College of Chest Physicians and Canadian Thoracic Society Guideline was developed to fill the void in the management of COPD.

· COPD is the fourth-leading cause of death in Canadian men and women and the third-leading cause in the United States; it claimed 133,965 US lives in 2009. However, approximately 24 million US adults have evidence of impaired lung function, indicating an underdiagnosis of COPD (sources: CDC; Confronting COPD in America, 2000; Public Health Agency of Canada).

· Exacerbations account for most of the morbidity, mortality, and costs associated with COPD. COPD accounts for the highest rate of hospital admissions among major chronic illnesses in Canada (source: Canadian Institute of Health Information).

· When exacerbations result in hospitalization, they have similar mortality to acute coronary syndrome. Observational studies have reported 8% of patients dying in hospitals and one-in-four patients dying in the subsequent 6 months (sources: Circulation, Canadian Respiratory Journal).

· The economic burden associated with moderate and severe exacerbations in Canada has been estimated in the range of $646 million to $736 million per annum (source: Journal of Respiratory Medicine).
About Temple Health
Temple University Health System (TUHS) is a $1.4 billion academic health system dedicated to providing access to quality patient care and supporting excellence in medical education and research. The Health System consists of Temple University Hospital (TUH), ranked among the “Best Hospitals” in the region by U.S. News & World Report; TUH-Episcopal Campus; TUH-Northeastern Campus; Fox Chase Cancer Center, an NCI-designated comprehensive cancer center; Jeanes Hospital, a community-based hospital offering medical, surgical and emergency services; Temple Transport Team, a ground and air-ambulance company; and Temple Physicians, Inc., a network of community-based specialty and primary-care physician practices. TUHS is affiliated with Temple University School of Medicine.
Temple University School of Medicine (TUSM), established in 1901, is one of the nation’s leading medical schools. Each year, the School of Medicine educates approximately 840 medical students and 140 graduate students. Based on its level of funding from the National Institutes of Health, Temple University School of Medicine is the second-highest ranked medical school in Philadelphia and the third-highest in the Commonwealth of Pennsylvania. According to U.S. News & World Report, TUSM is among the top 10 most applied-to medical schools in the nation.

About the American College of Chest Physicians
CHEST, publisher of the journal CHEST, is the global leader in advancing best patient outcomes through innovative chest medicine education, clinical research, and team-based care. Its mission is to champion the prevention, diagnosis, and treatment of chest diseases through education, communication, and research. It serves as an essential connection to clinical knowledge and resources for its 18,700 members from around the world who provide patient care in pulmonary, critical care, and sleep medicine. For information about CHEST, visit chestnet.org.