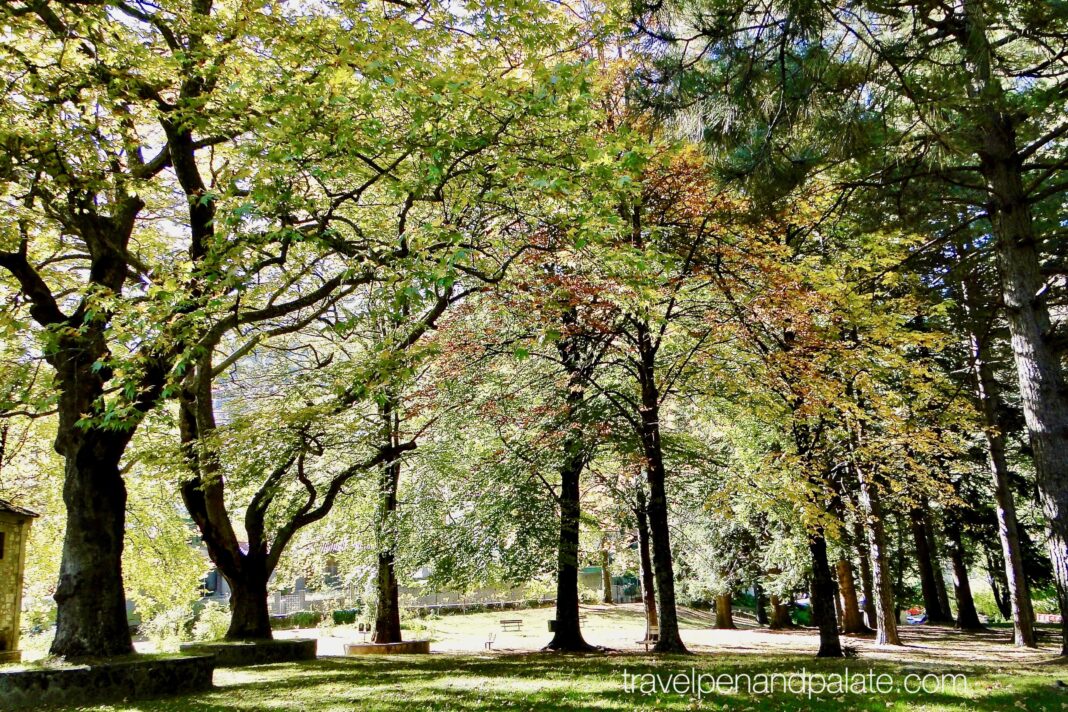 The lobby fireplace in the Hotel Olympic takes the chill off the mid-October afternoon along with a cup of hot Greek coffee and tangerine spoon sweet. Outside the air is crisp with an aroma of wood fires from both homes and restaurants. In Metsovo, Epirus, Greece this is the season for game, roast meats and smoked cheeses; this is autumn in the Pindus Mountains.

Epirus is a rugged, heavily forested and mountainous region largely made up of the Pindus Mountains. Considered the “spine of Greece,” the Pindus Mountains separate Epirus from Macedonia and Thessaly to the east. The ridges of the Pindus run north-south and generally are so steep that the valleys are suitable more for pasture than large-scale agriculture. The Adriatic coast of Epirus is Mediterranean but the interior is Alpine.

The wealthy Hellenized states of ancient Eastern Greece shipped copious amounts of trade goods from the Near and Far East. Many cities of Epirus rose up on trade routes that crossed the mountains leading to the Adriatic Sea. Traditional heavy woven and embroidered wool clothing, copper and wood kitchen utensils and intricate silversmithing in Metsovo shops indicate both the necessities of mountain life and the extent of Balkan influence within the Hellenic world.

Not surprisingly some in the Greek Golden Age considered Epirus, like Macedonia, to be “barbarian lands.” Even though the clothing, architecture and food may have had a Balkan feel, most considered them Greeks. Today generally older men and women gather on benches around Metsovo’s church of Agia Paraskevi to observe life on the central square and speak the ancient Aromanian dialect.

Ottoman conquest in the 15th century introduced Islam, but life in villages like Metsovo flowed with the times. The region was hardly an unknown to the conquerors considering the centuries old trade ties between East and West. In many ways the conquest ushered in a lengthy era of stability and prosperity for Metsovo as the engines of the economy – livestock and crafts – once more had a large market.

Livestock grazing on the green Pindus mountain slopes and crafts are still a part of life in Metsovo. To that foundation, tourism has had a significant impact over the past half century. Winter skiing, summer hiking, vineyards, unique foods, charming hotels and restaurants with a view add to the allure of this northwestern Greek enclave.

For a feeling of the geography and a cultural timeline for Metsovo start your visit by walking to the 14th century Monastery of Agios Nicholaos. Since Metsovo is a compact town there’s no need for directions other than the tourist signage conveniently placed within town starting in the central square. With the exception of a few roads within central Metsovo most “streets” are steep, postcard picturesque stone pedestrian paths lined with sturdy slate roofed stone houses and apartment buildings.

It is a moderately steep, safe 20+ minute walk down to the Monastery from town providing beautiful views of the Pindus Mountains and Metsovo ­at 1,160 meters/3,800 feet clinging to the hillsides. Fields of wild flowers, the charming Holy Trinity Orthodox Church (Αγία Τριάδα Μετσόβου), a covered overlook half way down and then through groves of trees with the cooling sound of a trickling stream the modest Medieval walled compound of St. Nickolas comes into view.

Its giant wooden doors were open and a monk tended to the autumn garden of root vegetables, cabbages and herbs going to seed. The Ioannina Ephorate of Antiquities administers the Monastery. Of special interest are the frescoes and icons.

Nearly all of the interior surfaces of the chapel are covered in exquisite artwork. They are among the best in the Greek Orthodox world. Started in the 14th century, the frescoes were restored and expanded in the early 1700s (during the Ottoman era) with another round of restoration completed in the 1960s by the Averof – Tositsas Foundation.

Despite fortress thick walls with only a few windows and dim lighting, the chapel shimmers with color: gold, red, royal blue, silver. The collage of images is overwhelming. Beneath the brilliant colors Orthodox iconography is packed with emotion.

If the walk is too daunting especially up the steep hill, it is possible to take a taxi. Either way you may wish to make the Tositsa mansion the next stop. Originally built in 1681 by the prominent Tositsas family, it was restored by the Baron Michael Tossizza Foundation under the directorship of Evangelos Averoff-Tositsas – two of the most illustrious family names in Metsovo.

The manor home of the Tositsas represents the life style of a rich Metsovo merchant family under Ottoman rule. Superb antiques illustrate daily life in this pre-industrial age. The top floor was constructed as an apartment and office for Evangelos Averoff-Tositsas, one of the most prominent Greek politicians of the second half of the 20th century.

A documentary film details Metsovo native Evangelos Averoff -Tositsas (1910-1990) eventful life, his extraordinary friendship with Baron Tossizza (1885–1950), which led to the vast endowment that created the foundation, and Averoff’s own profitable investments in reviving post-World War II Metsovo. The Foundation continues its mission preserving the past and improving the future of life in Metsovo

After touring the mansion, walk back to the central plaza and visit the nearby Averoff Museum of Neohellenic Art. The gallery exhibits a superb collection of paintings and sculptures by renowned Greek artists.

The 15th century Church of Agia Paraskevi in the town center has elaborate woodcarvings and priceless icons. Its decorated columns are of particular interest as well as its windows. Its park-like setting overlooking the center of Metsovo is a favored spot to sit and contemplate the village’s beauty.

A short stroll from town center is the Averofeios Garden, which is really an arboretum. Given this was mid-October, the leaves of the native tree species of Pindos were turning shades of gold, red and orange. At its center is the chapel of Agios Georgios.

Above the door to this Greek Orthodox Church is a gleaming fresco of St. George slaying the dragon. The “icon” of England is in Metsovo? The accurate question to ponder is how this Greek became a symbol for the Brits.

The historical 3rd century St. George was a Greek/Roman nobleman military officer martyred in Diocletian’s attempt to purge the Roman army of Christians. St. George became a patron of soldiers during the ill-fated Crusades and is a well-known symbol for England and other European kingdoms that participated in that despicable period of history.

For terrific hiking within town and in the surrounding area you need only to start in the central plaza and follow the URSA trail. This signed 40km/25 mile hike takes you high up in the village through a warren of streets and then into the Pindus countryside. The trail connects with additional hiking routes for the truly adventurous.

Although beautiful and sought after year round, Metsovo’s tourist high season is winter. Snow blankets the mountains and village turning all into an Alpine postcard. Located within the surrounding Valia-Kalda National Park, the Metsovo Ski Center a short taxi ride from the center of town, provides all that’s required for winter sport.

Metsovo is famous for its local cheeses (Metsovone and Metsovela). Metsovone (90% cow/10% goat cheese) is an aged smoked creamy semi-hard provolone type cheese. After three months ageing it’s gently smoked with grass, leaves and herbs for 12 days then aged an additional eight months. The smoke is mild and pairs well with local sausage and fresh figs.

The Katogi Averoff Winery is open for tastings and has a popular hotel. Evangelos Averoff wished to revive the wine industry in Metsovo. Although I would not yet include Katogi Averoff wines among Greece’s best, its hearty red (70% Cabernet Sauvignon and 30% Agiorgitiko) pairs well with smoked cheese and the full flavored grilled meats of Metsovo. Aged in French oak 12 months then in bottle 6 months, it had notes of under ripe red currents and blackberries with a hint of tobacco, but the finish was too acidic for my liking.

Metsovo is dotted with tavernas, cafes and coffee shops. Most surround the central plaza or are a brief walk from that central location. Although many have charming interiors, beautiful views and classic friendly Greek service, the menus tend to repeat themselves throughout town.

Platters of grilled meat and game with hearty pasta dishes dominate the offerings. Although well prepared, the dishes lacked the variety and complex flavors of classic Hellenistic cuisine. The influence of the Balkans is most evident in the food.

Among recommended restaurants: To Katoi has exceedingly friendly service, moderate prices and a well prepared traditional Metsovo menu. Restaurant Metsovitiko Saloni, for a wide variety of local dishes, Galaxy for the wild boar and To Tzaki.

The most satisfying meal I had was breakfast at my accommodations, the Hotel Olympic. Since this was off-season with few guests during the week, and they knew I was a chef, a few special items were prepared during my week long stay.

Besides the normal breakfast offerings of thick Greek yogurt with local Metsovo honey, kolokithopita (pumpkin pastry), fresh tomatoes, olives, rustic bread & strong Greek coffee in front of the fireplace, the Hotel Olympic one morning prepared Wild Rabbit Stifatho. That was my idea of how to start a day of hiking. The savory broth was earthy yet sweetened by baby onions.

A stifatho is a slow cooked savory stew that can be made with beef, veal, rabbit, boar, venison and even fish. The wine, herbs, spices and slow cooking results in a dish whose aromas you will enjoy inhaling as much as eating. Chef Georget Photos has the classic recipe in her cookbook  The Joyful Cook’s Guide to Heavenly Greek Cuisine.

Through extensive Greek travels the past five years boredom has never once been an issue. The mosaic of Greek history, geography, regional culture and foods is a template for the Eastern Mediterranean world. It’s not just Metsovo; within every village is the heart of Greece.