POSEIDON’S TRIDENT AND MY JOURNEY TO BYZANTIUM 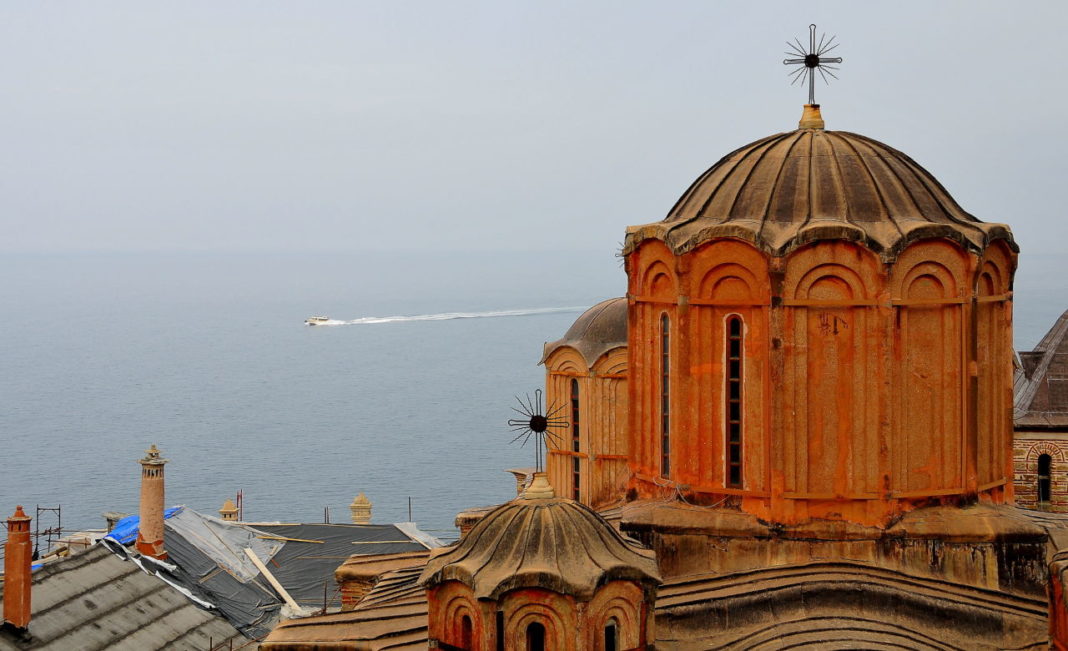 And therefore I have sailed the seas and come

to the holy city of Byzantium.

I don’t remember the exact date when I learned that my itinerary for my first journey to Northern Greece had been finalized, but I remember the season.  Looking through the open, upstairs window, I saw a courtyard with lush green bonnets still covering the trees and the carpet of jade velvet on the ground; the air was warm and dry.  August’s humid days were waning. I knew that when I returned in two months my view of the courtyard would not be the same. My eyes would see a palate of golden brown, bright yellow, and burnt orange and the air would be cool.  My odyssey would be at an end; there would be a new season.

As it happened, nothing would be the same when I returned.  How could it be? I had, indeed, “Sailed to Byzantium.” My voyage took me through the three peninsulas of Halkidiki– Kassandra, Sithonia, and Athos—extending like long fingers into the sea.  Along the way, I was hosted by seven resort hotels. My destination was in the third finger resting in the sea surrounding the ancient monasteries of Mt. Athos in Halkidiki, Northern Greece.

My journey began with a short, thirty-five-minute flight from Athens to the airport in Thessaloniki where a rental car awaited me.  My itinerary was planned by the incomparable Sofia Bournazi, Marketing Director for the Halkidiki Tourism Organization, responsible for a dynamic marketing plan that, in the last few years, is bringing larger numbers of tourists to Northern Greece, than ever before.

Established more than a thousand years ago.  Mt. Athos is said to be the oldest monastery on earth and  “a living museum of Byzantium.” Some say it is the most sacred spot on earth where today some 1,400 monks live in perfect peace and tranquility completely removed from the outside world.   A giant Byzantine Cross sits on a rock, marking the border between the 21st Century and Mt. Athos, home of the twenty monasteries where nothing has changed through the centuries.

My boat did not cross the border because it is forbidden; all passengers on board were limited to a look at the past while remaining in the present.   Pilgrims are permitted on the grounds with special permission, but women are not allowed. The monks’ goal is to bring the men who live in the monasteries closer to Christ through a Spartan way of life while creating splendid isolation from the outside world.  Their days never change; each consists of eight hours of sleep, eight hours of work, and eight hours of continuous chanting. Literally. The Monks chant for eight hours every day, intoning the same prayers that have been said for over a thousand years.

And be the singing-masters of my soul…

And gather me into the artifice of eternity

It was not the destination but the journey that enriched my life.  To reach the sea below the Byzantine monasteries of Mt. Athos, I had the thrill of discovering a world previously unknown to me—Halkidiki, and I stayed at six hotels before Eagles Palace, the splendid hotel where my odyssey came to an end.  My travels covered six weeks and the hotel in Halkidiki that hosted me are Pomegranate, Blue Bay, The Sani Resort, Flegra Palace, Anthemus, and Skites.

This region in Northern Greece is sculpted into a three-pronged Peninsula that some call Poseidon’s trident.   It offers unsurpassed beauty, a magnificent, 500 km coastline, and an environment and landscape so serene that one wishes it could be preserved in a bottle and taken home. The hospitality offered by the management staff of the hotels is unsurpassed, as is the allure of the architecture and beaches on the undulating coastline.

Something I found very thrilling was the beauty I saw when I left the highway for the entrance to the five-star hotels where I stayed or dined.   In some cases, the hotels were not visible from the main road, and in others I had just a glimpse and saw the full view when I reached the entrance.   Because of this, I experienced the exciting joy of discovery as I entered the grounds of each new destination.

Imagine driving for many miles on a grey highway with pastoral settings on each side; sometimes you will have to stop to allow a shepherd and his flock pass, and other stops will be to allow a farmer to pass, driving his tractor and followed by his dogs.   Then imagine leaving this scene abruptly and turning into a driveway where you see before you such splendid architecture that it gives you pause before entering. Your eyes take in the view with the intensity and wonderment of a cat. When you gain your composure and are guided through the lobby onto the hotel’s grounds, your reward is a spectacular view of what some say is the most magnificent coastline in all of Greece. The panoramic vista took the breath from my lungs.

Because none of this is visible from the highway, you have to “discover” it and for me, an insatiable itinerant, nothing is quite as satisfying as the thrill of discovery.  I had entered a new world and I knew parting would be difficult. How to best express and summarize my feelings for Halkidiki? With apologies to Lord Byron, I have borrowed some of the lovely words he wrote and substituted “Halkidiki” for  “Maid of Athens:”

give, oh give me back my heart.

Photos are courtesy of the Halkidiki Tourism Organization.