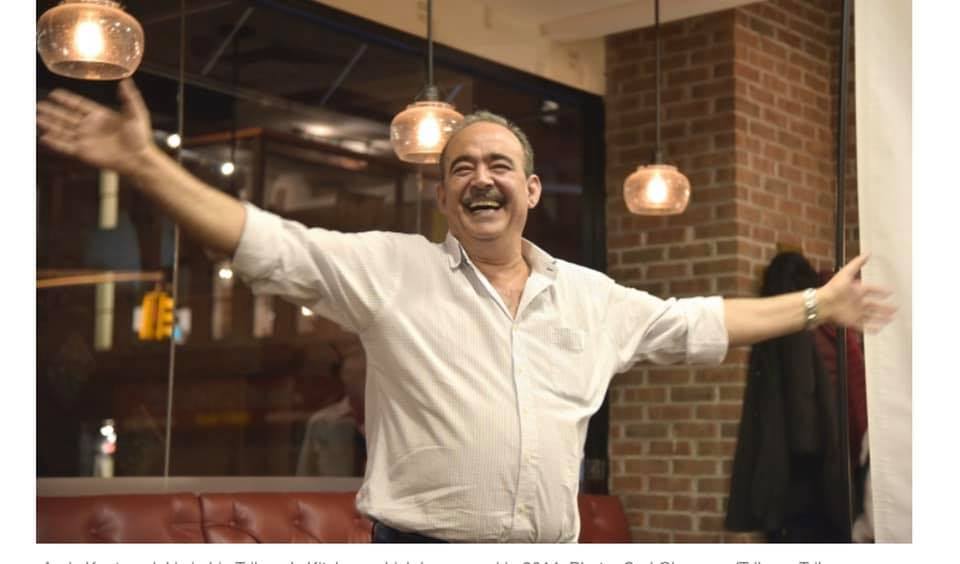 Greek-American restauranteur, Andreas Koutsoudakis, Sr., passed away on Friday, March 27, 2020.  The healthy and energetic 59-year old lost his battle to the undefeated Coronavirus. He became ill on March 12th and was rushed to the ICU on March 21st and was put on a mechanical ventilator.

Koutsoudakis was well known and respected across New York City and beyond.  He was the co-owner of Gee Whiz Diner in Tribeca in which he later sold and opened up Tribeca’s Kitchen. All his customers describe him as a warm, loving, energetic and kind-hearted soul.

A long time resident of New York, Koutsoudakis came to America at the age of 14 from Crete.  Since coming to America in 1975 with less than a penny to his name, he worked through the ranks of the diner industry to provide a better life for his family.  In 1989, he opened up his first diner, Gee Whiz next to the World Trade Center.  When 9/11 happened, he was one of the few restauranteurs that stayed in the area and invested. For that, the city of New York treasured his loyalty. In 2014, he opened up Tribeca’s Kitchen, which has become a dining staple for many politicians and famous people.

His only son, Andreas Koutsoudakis, Jr., an established lawyer in New York posted a heartwarming tribute to his father on Facebook:

“I am shattered beyond belief at the loss of my personal superhero. We were the best of friends, brothers even, and never more so than these last three months. My dad was always three steps ahead of me, and although I can’t comprehend how this could happen, I hang on to the amount of love and sacrifice this man gave his whole life for one purpose – family and good memories. He was the king of uniting our family and creating the happiest memories my whole life and the lives of those that knew him. This is unreal, and I can’t imagine waking up and not having the first call with him every morning. What an amazing human being, daddy, husband, uncle, friend, and host. Whatever he could be for you, he was exactly that, and he put himself last. An amazing soul and I am so beyond blessed to have this man as my guide since birth and forever.  God bless all of you through this nightmare. Cherish your family and memories, because that’s exactly what my dad stood for at all times. One goal – family, true love, and good memories…”

Koutsoudakis will be terribly missed by his family and all the people whose lives he has touched.  He was a generous and selfless soul.

In lieu of flowers, the Koutsoudakis family has set up a GoFundMe page where they are collecting donations in memory of Andreas Koutsoudakis Sr. in order to purchase medical supplies for the staff at Richmond University Medical Center in Staten Island and many other hospitals.

Andreas Jr. would like to hear from his dad’s customers and old friends from his early years through the present.  If you have a story to share about his dad, he would love to hear from you and can be reached via phone (917.418.7390) or email ([email protected]).