The story behind the Greek “New York’s Coffee Cup” 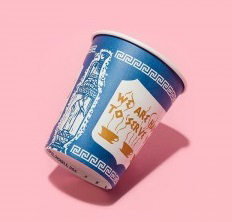 New York’s most iconic coffee cup, the Anthora, was designed by Czech-American immigrant Leslie Buck in 1963. The word “Anthora” was Buck’s distinctive mispronunciation of “amphora,” the two-handled Greek pitcher associated with the same imagery that appears on the coffee cup. With Grecian-style design on the rise in mid-century home decor and fashion, the cup’s iconography would have been familiar to New Yorkers of the 1960s as an homage to Classical heritage. It’s blue and white colors are an tribute to the Greek flag and its type design distinctly recalls Ancient Athenian lettering. The fact that it was a specifically Greek symbol was no accident; most of the to-go coffee in 1960s New York City was sold at Greek-American family restaurants, and the design’s homage to Greek culture made it appealing for merchants, while its warm slogan, “We Are Happy to Serve You,” soon satisfied customers of all backgrounds.

Initially standing at a very squat 10 ounces when debuted by Sherri Cup in 1965, the contemporary version, sold by infamous red cup creator Solo (ironically now owned by Dart Container, the company started by the same William Dart who created the styrofoam cup that Buck’s invention would overtake), is both taller and slimmer than the original, reflecting the aesthetic stereotype of the City that the cup is most associated with. Today, both 8-ounce and 10-ounce versions are available.

Historically, the paper cup used materials from a relatively unregulated network of paper product suppliers. Now, industry leaders such as Dart/Solo source paper from suppliers who have received certification from the Sustainable Forestry Initiative (SFI), a nonprofit created by the timber industry to encourage compliance with state and federal laws regulating the trade.

Dart Container has 33 manufacturing plants throughout the world: 23 in the United States (including the corporate headquarters in Mason, Michigan), two in Canada, four in Latin America, three in the United Kingdom, and one in Australia. Paper cups are manufactured using a universal method, which is almost entirely automated and requiring little direct human labor. First, the design is printed onto a long roll of the polyethylene-coated paper, which is then cut into individual pieces, called “flats”. As the name suggests, flats look as though you’ve cut the side of the cup down from top to bottom and flattened them out. The flats are then heat-sealed into cylinders, with bottoms made out of the same polyethylene-coated paper heat-sealed on the bottom. The finished product is a watertight and relatively heat-resistant container made of plastic-coated paper.

In this case, the Anthora Cup essentially sold itself; New Yorkers needed coffee, and the Greek diner or deli was where they were getting it. As the first disposable cup without obtrusive handles, it was a matter of convenience for a population known for being on the go. With this in mind, it’s obvious why the cup has become synonymous with New York; Anthora has appeared in countless films and TV shows set in New York City, including, but by no means limited to Law & Order, NYPD Blue and Men in Black. In fact, the design was so important to the aesthetic of NYC that production designer Bob Shaw used it to help convey a convincing ‘90s-era NYC atmosphere for The Wolf of Wall Street.

While the cup was nearly ubiquitous from its inception through the 1990s, the transition of coffee sales from diners to coffee shops cut deeply into the Anthora’s popularity. In 1994, over 500 million cups were sold—but by 2005, sales were down to 200 million. A year later, sales were at such a standstill that Solo Cup decided to completely halt the Anthora’s large-scale manufacturing and distribution.

This didn’t completely obliterate the design’s existence, however; Solo sold licenses of the design to souvenir shops such as the New York Coffee Cup Company, which continued selling cups to New York City restaurants and other interested parties. The cup was adopted as a note-worthy New York icon by MoMA, which sells a ceramic version of the cup—a popular item for tourists and locals alike. And much like anything else of value sold in NYC, knockoffs popped up left and right.’

Despite the rapid pace of change in New York, the City is a stickler for nostalgia. So when Dart Container announced that it would be reintroducing the cup in December 2015, it was less the return of an era and more the end of a brief, halfhearted sabbatical. The Anthora cup is certainly back, but it never exactly left in the first place.

Where they end up

Unfortunately, the immortality of the Anthora cup carries all the way through its life cycle. The same polyethylene coating that holds a paper cup together and prevents coffee from leaking through makes it extremely difficult to recycle and dramatically reduces its compostability.

The popularity of paper coffee cups is rooted partly in the claim that polystyrene foam cups aren’t recyclable—a reputational challenge that Dart Container has had to contend with—but they are actually a great deal easier to recycle than polyethylene-coated paper cups. Dart now directs customers to dozens of polystyrene recycling facilities throughout the United States, mostly on the east coast. Finding a paper recycling facility that will accept polyethylene-coated cups can be much more difficult. There appears to be none in New York City, with the nearest located in Keasbey, New Jersey. And while the paper in an Anthora cup composts relatively quickly, the plastic coating—which makes up as much as 5% of each cup’s volume—does not. Low-density polyethylene can take up to a thousand years to disintegrate even when exposed to sunlight and, if it’s buried, has no clear reason to disintegrate at all. It is entirely possible that, tens of thousands of years from now, plastic from billions of paper cups will lie undisturbed at the bottom of an abandoned landfill—by which time the Anthora design will be nearly as ancient, in relative terms, as the ancient Greek amphora designs that inspired it.

This is not to say that the paper cup industry isn’t taking measures to improve the biodegradability and recyclability of paper cups, but it seems to be a slow and challenging process. Starbucks made a public corporate effort to make 100% of its cups recyclable by the end of 2015, but conceded failure by the end of the year as it became increasingly clear that they were not on track to meet that target. It’s not yet clear how close the industry is to developing a more environmentally friendly disposable paper coffee cup that functions as well as the polyethylene-coated wonders we’re using today, but it’s a safe bet that some of them will feature the words “We Are Happy to Serve You.” So far, the Anthora design has proven to be every bit as durable as the polyethylene that coats it.