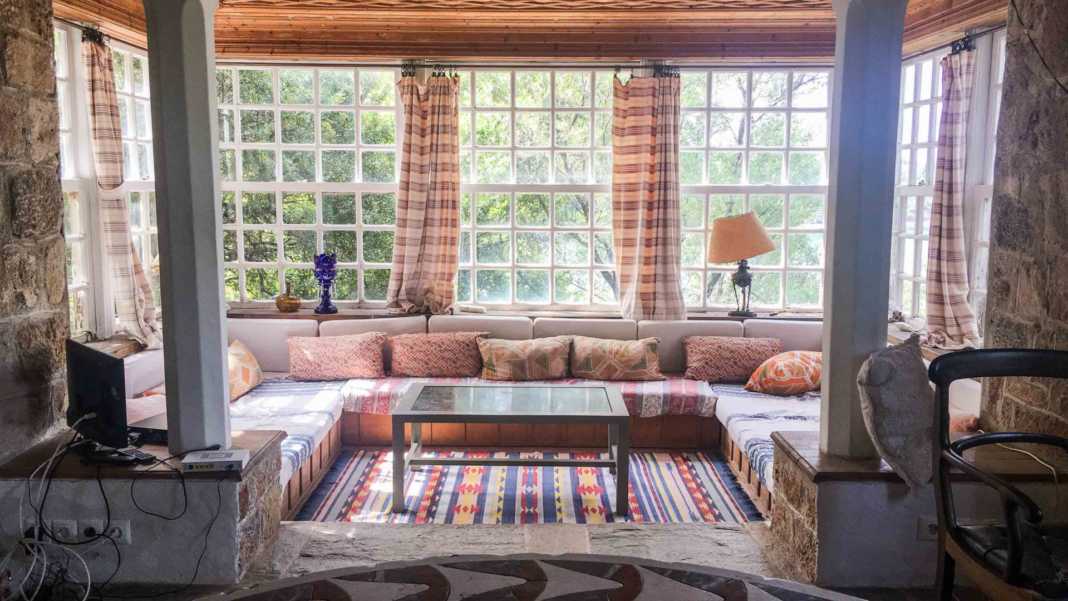 “We saw a peninsula ending in crescent-shaped beaches …We walked down into a gently sloping world of the utmost magical beauty…thick with magnificent olive trees and lots of other trees … Behind, the peninsula melted into a great conch of grey and orange rock.  I knew I would never leave.”

Some say there is a magnificent home on Greece’s Messinian Bay near the Village of Kardamyli that is one of the most beautiful homes in all of the Mediterranean.  Not one, but three stone buildings and a seaside patio stretch over an unspoiled, landscape that can take one’s breathe away. Cypress and olive trees stand like proud sentries in an untamed garden of white oleanders, while brilliant wild flowers cascade toward the turquoise sea. Just below the house, a narrow path with stone steps leads to a small pebble beach. It is whispered that it is here the Muses come for inspiration.

For many years, this architectural masterpiece was the home of the late Sir Patrick Leigh Fermor (1915-2011) and his wife Joan, (1912-2003). In 1996, the couple willed the property to the Benaki Museum, one of the most esteemed museums in Athens.  After extensive renovations that began in 2017 with a generous grant from the Stavros Niarchos Foundation, the Museum will open the property in 2020 as the Patrick and Joan Leigh Fermor Centre.

It will host writers, researchers, scholars, and intellectuals, and will be open at designated times to the public.  There will be residencies, educational activities in collaboration with partner universities, and special organized events open to the public. Details for the residency program will be announced at a later date.  Anyone interested in receiving information about The Benaki Museum and its activities is invited to register through Benaki’s website at https://www.benaki.gr/index.php?lang=en

Museum officials said they look forward to creating a vibrant center that will host notable figures from the intellectual and artistic worlds in collaboration with educational and cultural institutions in Greece and other countries.

According to a Museum official, The Patrick and Joan Leigh Fermor Centre will provide a space for:
– honorary hosting of notable representatives from the fields of literature, the arts, and other fields,
– hosting of researchers for work and research purposes,
– organization of higher-educational activities in collaboration with Universities and institutions in Greece and abroad,
– organization of educational and cultural events for the general public and residents of Kardamyli,
– scheduled tours of the property, focusing on the donors, the history of the house, and its use by the Benaki Museum,
– honorary hosting of benefactors and major supporters of the Benaki Museum.

The property is close to Kardamyli, but is located in the Kalamitsi area of Mani.  It consists of three stone buildings, designed by the architect Nikos Hatzimichalis in collaboration with the Leigh Fermors; work was completed in the mid 1960s.

The main house is L-shaped, has a tiled roof, and is built on two levels with the living room, kitchen, WC, and two en suite bedrooms on the top level.  A bedroom, shower, WC, and storage area are on the lower level, and courtyards and gardens connect both levels.

The Benaki Museum’s Board of Directors extends particular thanks to the Stavros Niarchos Foundation for its generous financial support, and to all those who participated in the realization of the project.  The idea was born when Tzannis Tzannetakis, a dear friend of the Leigh Fermors, suggested they consider donating their home to the Benaki.  Museum officials said the idea was wholeheartedly accepted by them considering the important legacy of the Museum and Leigh Fermor’s long friendship with its founder Antonis Benakis and his daughter Irini Kalliga.

A Museum official released this statement: “In the donation contract, Leigh Fermor appointed Tzannis Tzannetakis and his lawyer Antonis Masouridis as supervisors for the fulfillment of the terms of the donation. The Museum acquired full ownership of the property after Leigh Fermor’s death in the autumn of 2011 and since then has been closely collaborating with Tzannetakis’ children, Mrs. Tonia Tzannetakis and Mr. Petros Tzannetakis.”

To cover expenses, the Benaki will work with Aria Hotels to lease the property for ninety days each year, following the terms of the donation contract signed in 1996 between the Leigh Fermors and the Benaki Museum.

The project, a Museum official said, proved successful thanks to the efforts of the team involved: the contractors, Ballian Techniki, the study and supervision team Maria Kokkinou, Andreas Kourkoulas, Pandelis Argyros, Dimitris Pastras and Helli Pangalou, as well as the consultant Efi Delinikola from Stadion.

In the early 1960s, Leigh Fermor (universally known as “Paddy), and his wife, Joan, settled in Kardamyli. Through the years, friends, colleagues, and intellectuals from all over the world came to pay homage to the famous couple and to be entertained by Paddy, who was a master raconteur.  He was also a fearless soldier, self-taught scholar, charismatic host, and travel writer who lived his life as one great adventure.

In 1933, at the age of eighteen, with small volumes of Horace in his pockets, he walked from the Hook of Holland, across Europe through South Germany and Austria, to Constantinople.  Along the way, he fell in love with a Princess, and slept in both mansions and barns.

During World War II, Paddy served in Great Britain’s Special Operations Unit and was assigned to the island of Crete, where he lived in the mountains and sometimes dressed as a shepherd. The young soldier joined a band of Cretan guerillas fighting the Germans and they plotted and pulled off a daring escapade that is still talked about to this day and was made into a movie, “Ill Met by Moonlight.”

Leigh Fermor and another Englishman, W. Stanley Moss, led the resistance fighters in the daring capture of a German General, Karl Kreipe.  Eluding thousands of Nazi troops, the resistance fighters took their captive over the mountains and down to a British motor launch that sailed to Alexandria with the captured General on board. Leigh Fermor was in his late twenties.

A memorable incident occurred on Mt. Ida that Leigh Fermor describes in his book, Abducting a General:  the Kreipe Operation in Crete: as General Kreipe watched dawn unfolding, he was so enthralled that he began to softly recite an ode from Horace, Vides ut alta stet nive candidum/ Soracte. Leigh Fermor joined him and repeated from memory the remaining lines.   (The two men had a friendly reunion in 1972.)

Sir Patrick Leigh Fermor’s wrote many accounts of his travels and among his most popular are A Time of Gifts, and Between the Woods and Water, vivid accounts of the first two legs of his youthful journey to reach Constantinople.  The Broken Road is the last in the trilogy; it was edited by Colin Thubron and Artemis Cooper.  Others books include Mani,  A Time to Keep Silence, Roumeli, and The Traveller’s Tree.  Some were written in collaboration with other authors.

A biography, Patrick Leigh Fermor An Adventure, is a compelling, witty, and candid read by Artemis Cooper, a British writer and biographer and a friend of the great man.  The book was short-listed for the National Book Awards, the Costa Biography Prize and Waterstones Book of the Year, and received more recommendations as the Book of the Year in the national press than any other title in 2012.

Two years ago, I had the privilege of a private tour of the Fermor House by Elpida Belogianni, the Leigh Fermor’s housekeeper, but I have not been there since the repair works have been completed. I have spoken with museum officials, however, and am thrilled to learn that plans are to make the Centre one of the most intellectually vibrant places in all of Greece and one of the most beautiful.

I have heard that the house is currently occupied by nine sisters and their names are Clio, Euterpe, Thalia, Melpomeni, Terpsichore, Erato, Polymnia, Ourania and Calliope. They are the nine Muses and they are waiting for me—and for you;-)

To reserve a room in Kardamyli or nearby villages or to make travel arrangements, please contact Alexandros Koutsos at [email protected].

Photo courtesy of the Benaki Museum.

Aurelia is a novelist and a professional travel writer who lives in Kardamyli during the summer while working on her third novel, Forever of Yesterday.  It unfolds in the mystical landscape of Kardamyli and sister villages in The Mani. Her numerous articles, written about the Greek mainland and its islands, can be found on www.sweetspotsofgreece.blogspot.com