Using coercion to fingerprint children looking for safety is unacceptable 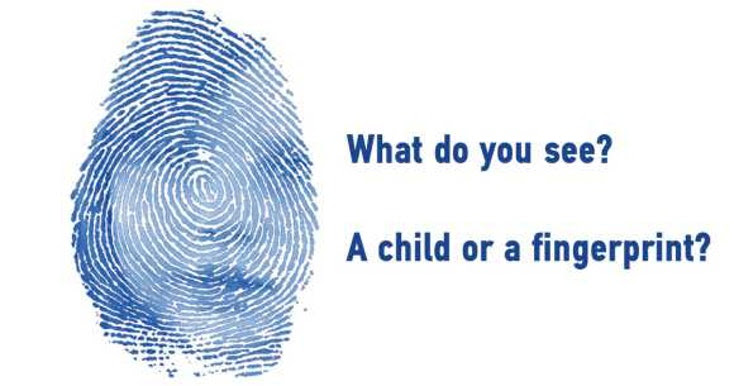 Brussels, 12 March 2018– The European Parliament is now discussing if children as young as 14 years old could be coerced to obtain their fingerprint when arriving in Europe, as part of the reform of the Common European Asylum System through the EURODAC regulation.

Missing Children Europe, together with 22 other signatories, among them its Greek member “The Smile of the Child”, urges the EU to exempt children and vulnerable groups from all forms of coercion in the EURODAC Regulation, in compliance with the UN Convention of the Rights of the Child.

“Even if the use of biometric data could be helpful in improving the protection of children, especially in case they went missing, the use of force or coercion on any child in Europe is simply unacceptable. It may be a highly traumatising experience and frontline professionals demonstrated on many occasions that there are more successful ways to facilitate registration of both children and adults at EU entry points” – says Federica Toscano, Head of Programme on Children in Migration at Missing Children Europe.

The changes suggested by the EURODAC proposal lower the age at which a child mustbe registered from fourteen to six and introduces the use of coercion to obtain fingerprints.In effect this would mean that use of force and violence against children as part of the registration process would be allowed. Member states would also be given the authority to introduce sanctions, including the detention of children, for non-compliance during fingerprinting. Discussions have gone as far as trying to outline a list of coercive behaviours that could be acceptable for children.

Fingerprints are often considered as the best way to make sure every child is accounted for and protected within and across borders. While they can be helpful, if done in the right way, it is unacceptable to use coercion on children.We, as a society, have a shared responsibility and commitment to care for our future generations.

The possibility to use coercion on children violates several children’s rights according to the EU Fundamental Rights Agency (FRA) and the UN Committee on Child Rights, which EU Member States have taken joint responsibility to respect and uphold. Coercive practices can traumatise children and results in a fear of authorities and awful practices such as the burning of their fingerprints. Rather, children should be appropriately informed about the reasons and benefits of fingerprinting and concerns should be understood and addressed respectfully.

“Registration with fingerprints is crucial to ensure that children enter and stay in the national protection system, but the EP Intergroup on Children’s Rights stands firmly against any form of violence and coercive measures against children. Identifying children helps protect them from going missing and being exploited by criminal organizations, but It is crucial that the registration process respects the UN Convention on the Rights of the Child”, says Anna Maria Corazza Bildt MEP, Co-Chair of the EP Intergroup on Children’s Rights.

Recommendations and next steps

Professionals working with children confirm that the most successful way to facilitate registration of both children and adults is by explaining people’s rights and procedures in a language they understand, building trust and creating adequate reception conditions. In the case of unaccompanied children, trained guardians could be crucial allies in making sure that the fingerprinting process happens in the most appropriate context and without harming children.

“Eurodac Regulation needs to respect a right balance between borders’ protection, the respect of human rights and child protection. The registration processes of migrant children – including fingerprints – should be conducted in a child-friendly manner, in the presence of child care professionals, and without any form of coercion” says Nathalie Griesbeck MEP, Vice-Chair of the EP Intergroup on Children’s Rights, Chair of Special Committee on Terrorism (TERR) & ALDE Spokesperson in Committee on Civil Liberties, Justice and Home Affairs (LIBE)

The European Commission, Council and Parliament are now pushing to allow coercion of children from the age of fourteen. Missing Children Europe, together with 22 other signatories urge national and European leaders to exempt children and vulnerable groups from all forms of coercion in the EURODAC Regulation, in order to avoid hurting and traumatizing children.

“The widespread consensus on this matter is a true testament to what is really at stake here: the protection of basic human and child rights, and the values of our society”– says Federica Toscano from Missing Children Europe.

Missing Children Europe (MCE) is the European federation for missing and sexually exploited children, representing 31 organisations from 27 European countries. We provide the link between research, policies and organisations on the ground to protect children from any kind of violence, abuse or neglect that is caused by or results from them going missing.

The UN Convention on the Rights of the Child (UN CRC) states that every person below the age of eighteen years is a child (art.1). States Parties should take all appropriate measures to protect children from all forms of physical or mental violence (art.19.1) and no child shall be deprived of his or her liberty unlawfully or arbitrarily (art.37).The Committee on the Rights of the Child has affirmed that “No violence against children is justifiable; all violence against children is preventable”, where violence includes both physical and mental violence (General comment No. 13). It has equally clarified:“that the detention of any child because of their or their parents’ migration status constitutes a child rights violation and contravenes the principle of the best interests of the child’’. Both the UN CRC and EU Charter of Fundamental Rights state that child’s best interests must be a primary consideration in all actions relating to children (art. 3 UNCRC, art. 24.2 EU Charter).