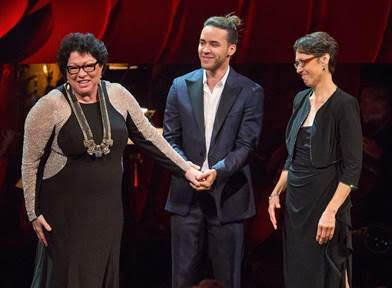 And Many More Latino Leaders & Cultural Figures Appear On The Broadcast

“Sonia Sotomayor, Junot Díaz Among Hispanics Honored At Heritage Awards- The country’s first Latina Supreme Court Justice was honored at the 29th Hispanic Heritage Awards, one of several high-profile Hispanics who were recognized for their civic and artistic contributions. To cheers and applause, Sotomayor said that ‘this award is not about me. It’s about the many mothers and fathers, abuelos and abuelitas, and all the others who have led our community, who have taught us all and carried us upward on their backs with hard work and determination.” –NBC NEWS

(C): Justice Sotomayor, ‘Arts’ Honorees The Fania All-Stars & many more joined together onstage for the finale.

“Salsa and a Supreme Court justice at the Hispanic Heritage Awards… The awards honored Latino celebrities and their accomplishments across a variety of genres, including novelist Junot Díaz and legendary salsa group the Fania All-Stars…The musical performances, not-surprisingly, stole the show. Nicholas Rodriguez sang a powerful rendition of ‘Hallelujah’ during a moving tribute to the victims of Orlando’s Pulse nightclub massacre, and Latino heartthrob/pop icon J Balvin’s performance prompted shrieks of adoration… the crowd clearly adored Supreme Court Justice Sonia Sotomayor, who received the leadership award, and concluded the ceremony by thanking the Latino community and sending her prayers to those experiencing the major blackouts in Puerto Rico.”

The Awards, among the highest honors by Latinos for Latinos and are supported by 40 national Hispanic-serving institutions, recognize the contributions and accomplishments of Latino leaders in various fields while celebrating cultural pride and the great promise to America. The 2016 Hispanic Heritage Awardees and the Medallion Sponsors include:

SHORTS HD and HHF will also announce the winner of the Hispanic Heritage Short Film Award competition from the stage selected from approximately 1,000 entries and five finalists in an effort to encourage more Latinos to become filmmakers.

The Hispanic Heritage Awards serve as a launch of HHF’s year-round, award-winning programs which inspire, prepare and connect Latino leaders in the classroom, community and workforce to meet America’s needs in priority fields.  HHF is a 501(c)(3) nonprofit organization.  For more information on the mission of HHF visit www.hispanicheritage.org.

* HIGH-RESOLUTION PHOTOS WITH CREDITS, AND

For more information on the 2016 Hispanic Heritage Awards please contact: