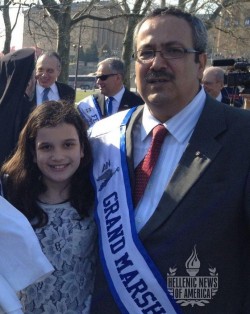 New York – March 25, 2016 – This year’s 78th annual Greek Independence Day Parade commemorating the 195th Anniversary of Greek Independence from the Ottoman Empire is set to march up Manhattan’s Fifth Avenue on Sunday, April 10, 2016. More than 40 floats, 20 bands and 100,000 participants will take part in this year’s parade, which kicks off at 1:30pm from 64th Street and continues to 79th Street. According to The Federation of Hellenic Societies of Greater NY this year’s Grand Marshals include, The Honorable Mayor of New York City Bill di Blasio, the Army National Guardsman who helped stop a gunman on a Paris bound train, Alek Skarlatos, US Congressman from Maryland, John Sarbanes, the Leader of the New Democracy Party in Greece, Mr. Kyriakos Mitsotakis, and CEO of Sigmapharm Laboratories Dr. Spiros Spireas. The Presidential Guard from Greece is always a crowd favorite. The parade will be broadcast live on WWOR TV Channel 9 starting at 2:00pm. Contact: Nomiki Kastanas