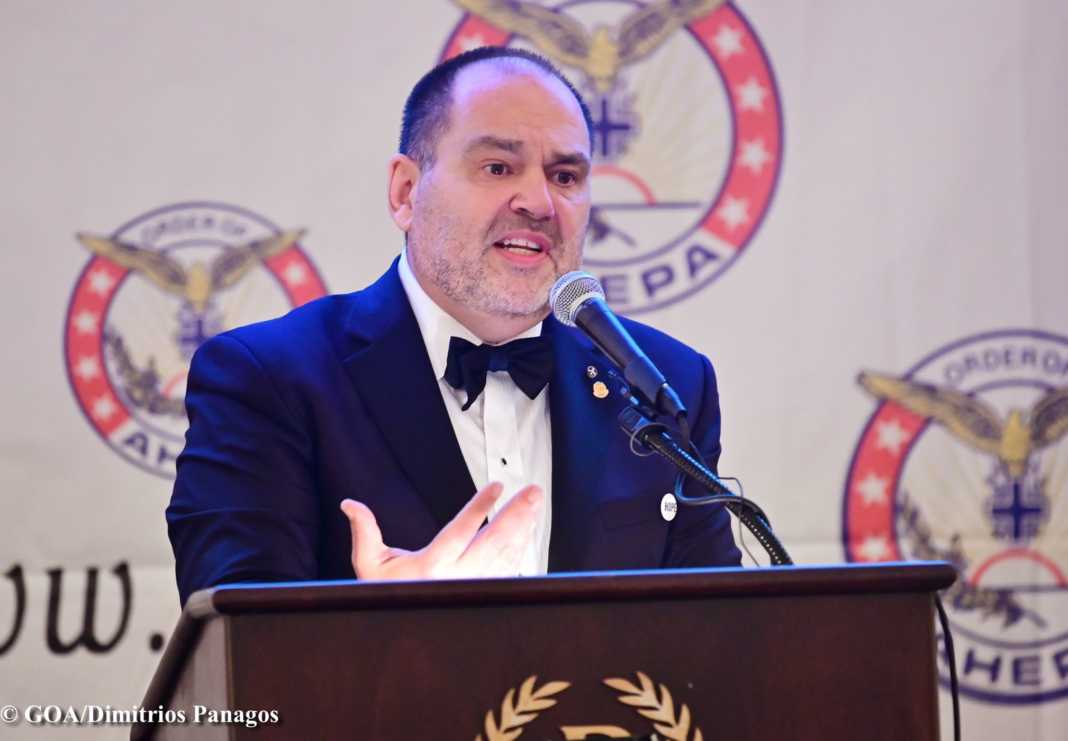 Among those in attendance was Paul Kotrotsios, Founder of Hellenic News of America, who spoke with George E. Loucas, AHEPA Supreme President. Loucas talked about a former president of the organization, no one other than his grandfather, George Loucas, who happened to be elected the very day his grandson was born, marking a very special milestone.

“I’m a true legacy,” said President Loucas during the interview.

The fact that he was born the same day his grandfather was elected is exactly why he was named after him. What also made history for this grandfather/grandson is that they are the first-ever to both be AHEPA Supreme Presidents but hopefully not the last.

The late President Loucas, as well as the current president’s parents, hail from Greece and today he is keeping the family roots alive. In his duty, he encourages, educates and inspires everyone that he encounters to be all that they can. He thought that speaking with news media would be a great way to send the message to a wider audience than those that hear him speak in person.

“One of the most critical jobs in America is keeping honest journalism alive,” he said. “It’s important to keep these principles alive and in a place to hold people accountable.”

In one of his speeches during the convention, President Loucas talked about how it is an honor to serve.

“It’s not only representing Greek Americans, it’s Hellenes and PhilHellenes because America AHEPA is growing and I strive to make sure it is not limited to people of Greek descent,” he said. “I love this organization. More importantly, I love my AHEPA family.”

Having connections is an essential part of life. President Loucas may not have gotten to where he is today had his grandfather not been friends with Judge John Mammos, his Supreme Counselor at the convention where he was elected. When he was graduating from pharmacy school, he grew interested in going on to law school. He received a call from Judge Mammos in Cleveland. From there, he went to law school and stayed there for 30 years.

“The reason he did that was because of the love he had for my grandfather,” said Lucas. “Those are the types of bonds that are made that go beyond generations.”

When Greeks initially moved to America year ago, they yearned to have rights in this new home. AHEPA afforded them opportunities and so it became a “voice” of Greek immigrants. President Loucas does not see any other organization being able to do what AHEPA has done so far.

“I’m honored and humbled to see what this grassroots really means,” he said. “I refuse to let it go.”

AHEPA was formed in 1922 to help Greek immigrants become American citizens. Today, however, it helps the world realize the ideals of ancient Greece. It now has more than 30 chapters around so that Greeks can develop relationships with people all over the globe.

“That’s where we are going today,” said President Lucas.

Over the past year, AHEPA has traveled all over the world. Among those trips was a visit with fire victims in Greece doing what it could to assist. Those that suffered a loss were especially grateful that attention was brought to their plight. That would not be possible without the local chapter of AHEPA.

Another highlight was a trip to Jerusalem for a tri-conference with the Israelis, Cyprus and Greek partnership. They were there out of respect for B’Nai B’Rith as they were formed in conjunction with B’Nai Brith. The United States sees AHEPA as a gap in helping Israel.

“We were very well-received by the Israeli community,” said President Loucas.

AHEPA is always in touch with the Secretary of State and other government officials so that folks understand where it is going by helping Turkey and Cyprus. President Loucas believes AHEPA should bend together and have a National Friendship Dinner once each year to gain support. He also thinks that using full-page ads in newspapers throughout the country would be a wonderful way to show its grassroots and get things done.

“We need to let our politicians know that through six degrees of separation, our 25,000 members of our AHEPA family is politically significant to this day,” he said. “We will gladly publish in that paper all the politicians’ names that have taken junkets on Turkey’s dime to Turkey and other issues of importance including its smothering of Greek Orthodoxy by extinguishing the birthright of our patriarch and those issues.”

AHEPA is non-profit. It is not a religious or political organization. Nevertheless, it sees issues as a matter of importance and reaches out to do what it can. In order to join the organization, one must be a Christian.

“We must make sure that the fountain of our membership survives,” said President Loucas.