The Founder, of the innovative idea of Green Girls Golf is Greek-American Sophia Manolis a Jersey Native, who has created a brand like no other. Green Girls Golf Caddies and Event Hostesses for Golf Events has been around for eleven years, it originated in New Jersey and now has branched out to Arizona. The all-female caddies participate and work with all types golf outings offering a white-glove service.  Sophia remains the catalyst for this company which she has hosted and worked for corporate, private, and not-profit events.

One of their most memorable events was when they joined Jaws Youth Playbook where they coordinated an outing focusing on promoting youth wellness and health for children. GGG moved on and offered their services for the organization Bright Smile that is an advocate for children with disabilities.  In addition, they added to their list of charitable outings was with the Podiatric Medicine Foundation (The Foundation provides ongoing education and professional development for practitioners in the field) and then with the Susan B. Yoskowitz Charity at the Crystal Springs Resort every year. Susan B. Yoskowitz Charities goal is to focus on raising funds for a rare form of cancer.

“My services specialize in golf outings such as fundraisers, charities and benefits.  We can either help you run it or lend a hand in providing staffing for the outing; like event hostesses that can participate in raising money and helping with sponsors or just being a private caddie service for the fellow golfers. “ 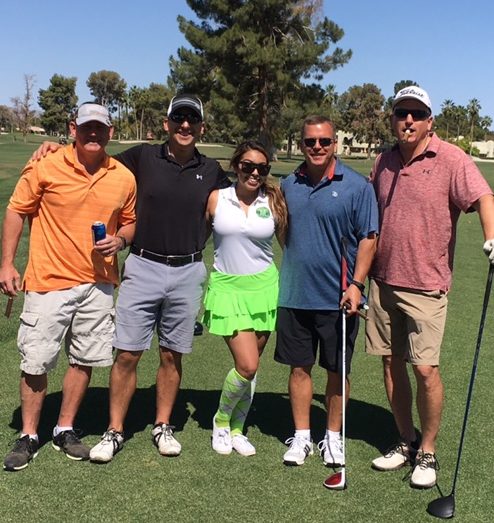 GGG has planted their flag in the Tri-State and have made a great brand and felt that it needed to branch out and did so by offering GGG services in Scottsdale, Arizona. This past April they completed their first golf event in Scottsdale for “The First Alarm Golf Tournament” which was part of the 8th Annual for the Goodyear Guns and Hoes.  The event was a huge success with the caddies and the participants. Nothing pleases the girl caddies more than working for a good cause. The tournament is meant to support fire fighters in the Scottsdale area. GGG has worked with the Fire Department and the Police Departments from the area who congregate together to put on this annual golf outing every year.

The tournament has been running for eight years now and comprised of the police and fire departments from around the valley. The event is meant to raise funds for charities and for the Phoenix Children’s Hospital to Children’s Burn Camps.  Green Girls Golf has grown and has set up shop in South Florida and as we mentioned now in South West of Arizona. One of their next target States is Houston, Texas. They are focusing on states that have avid golfers where they can establish a great presence and a brand that would allow GGG to grow and change the world of the golfer and organizations that can make a positive change in society. In addition, they can expand their services for needed events across the country. To keep up with their next outing and updates visit them https://www.greengirlsgolf.com/