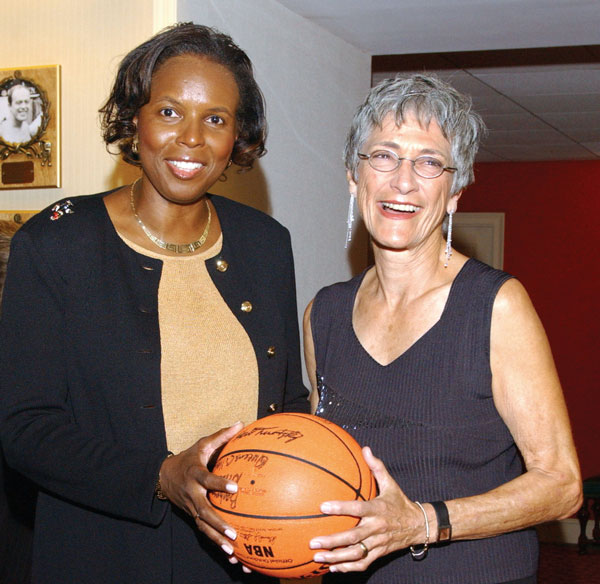 — Kyvallos, Who Coached the First-Ever Collegiate Women’s Basketball Game at Madison Square Garden, is One of 12 Finalists for the Prestigious Honor —

QUEENS, NY, January 22, 2019 – Lucille Kyvallos, former Queens College women’s basketball coach and a pioneer of the sport, is one of 12 finalists for the 2019 class of the Women’s Basketball Hall of Fame.

Kyvallos had unprecedented success as the head coach of the Queens College women’s basketball team for 12 seasons beginning in 1968. In addition to her success on the court, Kyvallos was at the forefront of the Title IX movement and positioned women’s basketball on the national sports media scene.

“We are very proud of Lucille Kyvallos for her well-deserved nomination for the 2019 Women’s Basketball Hall of Fame Class. Kyvallos’ positive influence extended not only to the many student-athletes she coached here at Queens College, but also to all the student-athletes around the country who benefited from her contributions to the advancement of the game of women’s basketball. Her pioneering legacy is an everyday part of our student-athletes’ experience as they compete on the college’s Lucille Kyvallos basketball court, the first such court in New York City to be named for a woman,” says Queens College President Félix V. Matos Rodríguez.

In just a few years at Queens, Kyvallos was able to turn the Knights women’s basketball team into one of the top programs in the country. During her tenure, the team had a record of 239-77 and was ranked among the top ten nationwide from 1972-1978. In 1973, Queens College hosted the Association for Intercollegiate Athletics for Women (AIAW) National Championship Tournament in front of packed FitzGerald Gymnasium. QC lost in the Championship game to Immaculata University, but the popularity of the event got the attention of many in New York City, including Madison Square Garden.

In 1977, Kyvallos was selected as the head coach of the United States women’s basketball team at the World University Games in Sofia, Bulgaria. There she led USA to a silver medal, losing only to the Soviet Union in the gold medal game. One of Kyvallos’ former players at Queens, Gail Marquis, competed for the 1976 USA Olympic women’s basketball team in Montreal. Kyvallos also served on the United States Olympic Committee from 1969 to 1972 and from 1974 to 1976.

The Class of 2019 will be selected from the 12 finalists and announced on ESPN2 during the February 4th Baylor at Texas game (7:00 pm ET).

Photo Caption: Lucille Kyvallos appears on the right. At left is Queens College alumna Gail Marquis, who played under Kyvallos, and was on the 1976 silver medalist women’s Olympic basketball team.