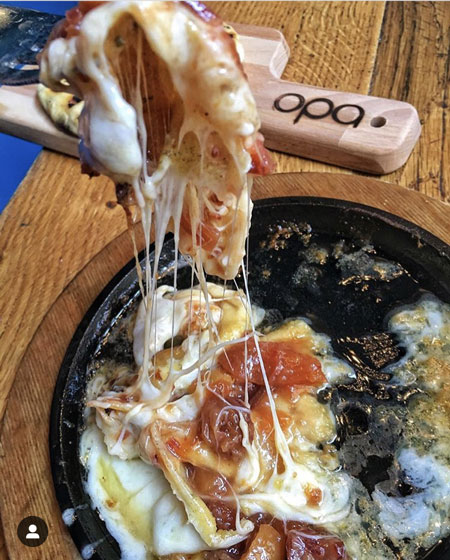 It was Friday night and as I entered Opa restaurant in the heart of Philadelphia, I was immersed in a contemporary Mediterranean experience.  Opa is adorned with clay Cycladic chandeliers and flanked with beautiful blue and white walls, beckoning an invitation to the Greek islands.  The 360° white pebble bar forms the center of the restaurant and hosts a great spot for casual drinks and nightlife.  Opa is directly located in Philadelphia’s restaurant hub of midtown village between 13th and Sansom Street.

Upon my arrival, I was seated by the gracious staff and greeted by owner and my personal longtime family friend, Vasiliki Tsiouris.

Vasiliki shared with the HNA how the idea of Opa came to life.  Vasiliki and her brother, George Tsiouris, opened Opa back in February of 2011.  “My brother and I always wanted to open up a place together in Philly.  We were in Greece one summer at the same time but were in different spots in Gazi, Athens, Greece.  We were both at really cool rooftops and realized just how much we loved the feel of Gazi,” said Vasiliki.   She explained to me that once they got back from Greece, they started planning out their dream restaurant.  When they found their location in midtown village, among the cluster of vibrant bars and restaurants, they just knew this spot was it because it brought back those summer feels of Gazi.

“Both of our parents were born in small villages in Epirus, Greece.  A lot on our menu is based off our background and what we ate as kids.  We traveled back to Greece often and got to experience the culture, cuisine and how they evolved, and we took all that into consideration,” shared Vasiliki.

Vasiliki explained how her experiences growing up Greek American have inspired her and impacted her business acumen in the restaurant world.  As a young girl, she loved to design and cook. She could always be found helping her mom make things in the kitchen.  A lot of what Opa is today is based on their experiences in Greece and their parents.  “How did we get into the restaurant business?  Our dad had restaurants for over 50 years, so he was a big inspiration for us.  His legacy lives on in what we do here.  And my mom cooks so well that I always tell her that if I could get the talent you have in your pinky, I will be ok,” expressed Vasiliki.

As the contemporary Greek dishes came out, I eagerly sipped on my Greek Mojito made up of mastiha, fresh lemon and basil and bit into my filo bread.  Yes, filo!  Instead of serving traditional bread loaves with their meals, Opa crafted a unique take on bread. The unique formation is called Broken Plate which is made up of thin and crisp pieces of baked phyllo dough.  Next, we got into the Saganaki, which was made with kasseri Greek cheese and finished with apricot and date compote.  “With the addition of the apricot and date, it creates a nice flavor to the cheese base for a mellow flavor.”  I was able to sample the Zucchini and Kale Chips, the Pita Pie Tasting, Greek Mom’s Grilled Cheese and the Lamb Chops. I found that the kale was an excellent pairing with the zucchini chips.  The Pita Pie Tasting was amazing, its displayed of sampling three different pitas which were all delicious and inspired by home-made recipes.  The butternut squash was my favorite because it had a deliciously sweet taste. The mushroom pita and spanakopita are also very popular.  Greek Mom’s Grilled Cheese, is that a thing? Yes, it is, and it was delicious!  It’s made with all different Greek cheeses such as Kasseri, Metsovone and Kefalograviera and drizzled with honey to sweeten your taste buds to perfection.  We also tried the lamb chops which were nicely grilled, seasoned with Greek spices and a served with orzo.

Opa’s unique flavors come from homemade recipes that their mom crafted over the years.  “Each dish is made with heart and thought behind it.  We know what people like here because we grew up here [America] and we know what people like there [Greece].  It’s the synergy,” shared Vasiliki.   Opa’s traditionally inspired food menu is accompanied by a modern feel restaurant. “We are inspired by today’s Greece.”

Siblings, George and Vasiliki Tsouris have expanded into Drury Beer Garden and Craftsman Row.  Drury Beer Garden is an addition to Opa in the backyard and is a year-round beer garden.  Craftsman Row just celebrated its third anniversary in December and has American based cuisine with live music every Friday and Saturday.