CommunityNYC is gearing up to celebrate Greece's 201 years of independence on...
CommunityCommunity OrganizationsCultureEventsFeatured

The Greek Independence Day Parade on 5th Avenue in NYC will take place on Sunday, June 5, 2022.  The Greek parade in NYC is the largest parade outside of Greece with tens of thousands of spectators of Hellenic and Philhellenic backgrounds.  The parade has proven to be a wonderful opportunity to showcase our rich heritage and culture to American society.  The Founder of the Hellenic News of America, Paul Kotrotsios, had the chance to discuss exclusively with Ilias Katsos, Co-Chair of the parade, where he shared details on the upcoming parade.

Paul Kotrotsios: Tell us a little bit about the parade after a 2-year hiatus due to COVID-19.

Ilias Katsos:  Thank you, Paul. I have had the honor and pleasure to assist, along with George Venizelos, and John Catsimatidis who had been asked to Chair the Federation of Hellenic Societies of New York Greek Independence Day Parade 2022 with Nicholas Bardis and Demetrius Kalamara’s serving as Co-Chairs, and with Philip Christopher being the Parade Dinner Chairman on June 4th at the Hilton.

As you have stated the New York City Greek Independence Day Parade is the largest and most important significant parade in the Hellenic diaspora. This year in particular it is enthusiastically awaited by both the Hellenic American and greater Philhellenic community after two years of the Covid pandemic.

I would also like to Congratulate (!!!) you and the Hellenic News of America on your 35th Anniversary. For 35 years the Hellenic News of America has been an important, powerful, unique, and unifying force in the promotion and preservation of Hellenism in its finest journalistic manifestation. It is a premier network for Hellenic and Hellenic American news in the diaspora and I was honored to have received the Philotimo Award from your prominent organization recently at your very well attended and highly successful 35th Anniversary Gala. 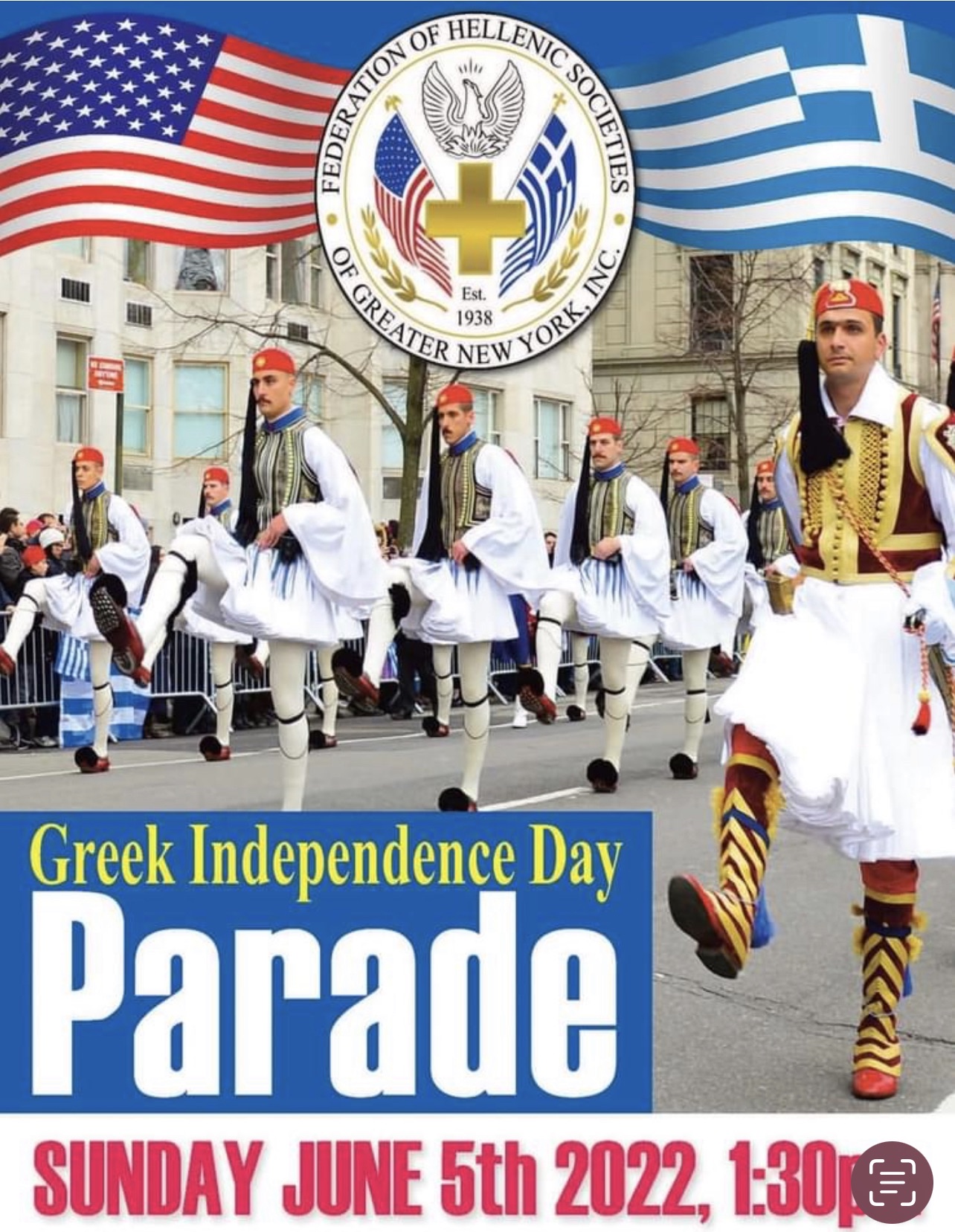 PK:  What is the objective of the parade this year?

IK:  In this year’s parade we will be celebrating the belated, due to Covid, Bicentennial of the Hellenic Independence of 1821, the belated 2500 Year Anniversary of the Battles of Thermopylae/ Salamis and Plataea, the 100 Year Anniversary of the GOA, the 100th Year Anniversary of AHEPA, as well importantly we will be Commemorating the devastating 100 Year Anniversary of the Burning of Smyrna (1922) the last major phase in the 30 year (1894-1924) Christian (Greek/Armenian/Assyrian) genocide in the late Ottoman period that took approx. 3.2 million innocent civilian lives. In addition as in all past parades, the parade will have/include themes that affect both Hellenic and American values in an international context and which vary year to year. Such themes for example this year may include the Irredentism and Finlandization of the East Mediterranean by the Turkish Republic, as well as the international importance of the return of the Parthenon/ Acropolis Marbles stolen during the Ottoman period, prior to the Hellenic Revolution, and shipped (1802-1812) to England where they are now in captivity metaphorically as “Greek Slaves” waiting to be freed.

PK:  What do you consider as the main accomplishments of the Omogeneia so far?

IK: The accomplishments of the Hellenic Omogeneia in America starting in the 19th Century, which includes the diaspora and beyond generationally, are legendary and one of marked significant financial and cultural success stories in all aspects of various and numerous American industries, education, and leadership positions that have earned the respect and awe of many within this great American nation. Many books and articles, etc., have been written about it here and abroad from various and different angles. The Omogenia within America is highly diverse and represents millions of people depending on how you categorize and define it. I find many/perhaps most Hellenes abroad and even in the U.S. (depending on their background and length of stay, etc.) don’t really understand it. In some ways, the lack of understanding of the Omogeneia by many reminds us of the Indian parable of “the blind men and the elephant.” It is a story of a group of blind men who have never come across an elephant before and are asked to describe what the elephant is like by touching it. Depending on what the individual blind men touch (the trunk, the leg, etc.) they will describe it differently. The Omogeneia is of course continuing to evolve with the times and based on its average high level of education and economic strength affecting America and its future in a positive fashion. One thing most of the Omogeneia including Philhellenes share in common in America is their love of Hellenism and Hellas.

PK:  People are confused by different announcements and reports regarding the upcoming parade in New York. Is the Archbishop coming?  Finally, are the Evzones coming to participate in the parade?

IK: The confusion you refer to, and there is a lot of it, appears to be related to issues that are unrelated to the parade but rather tangential and which have appeared in the Hellenic American media, are a matter of record, and evolving. The different announcements and reports relate in my opinion, to a degree, to an error of omission reports (not commonly a norm among seasoned professionals) by some which lead to various assumptions being made by readers. There are Federation Committee Chairs and Co-Chairs of the parade as well as parade press members who are available to answer questions to avoid these issues if asked. Yes, His Eminence Archbishop Elpidophoros is certainly coming to the parade on June 5th as well as the Hilton parade dinner event on June 4th.  In terms of the Evzones as of this interview, I am not sure whether they are coming but certainly, we would be honored to have them.

PK: Please also clarify why June 5th was chosen instead of Celebrating in March Marking the 201 years of the Greek Revolution?

IK:  The Federation Greek Independence Day Parade in New York from 1938 when it started and 1951 when it started going down 5th Avenue as many people may not know not being New Yorkers was not always, based on weather, in March (in fact quite the contrary) and related to holidays and when permits could be obtained from New York City. Greek Independence Day parades in New York have varied historically from March to July (in 1895 to coordinate with the American 4th of July). Also, all the early parades in New York into the 1920s were never in March but in April since they were per the Julian not the Gregorian Calendar of the West. June 5th was not chosen but rather the first available date New York City had open this year on their calendar to give a permit for the parade down 5th Avenue, and that also made sense. The June 5th date for the parade has been explained publicly by the parade Co-Chairs numerous times and perhaps not adequately reported in the media. It was explained at various public Stathakion meetings by the parade Co-Chairs that May 29th for the parade made no sense being Memorial Day weekend, that May 22nd, as well as May 15, was taken by others, that May 8 was Mother’s Day, that May 1 was Thomas Sunday, that April 30th was Great and Holy Pascha, and that April 17 was Palm Sunday.

PK:  Are the Greek Consulates and Embassies assisting or cooperating with the committee?

IK: We have been blessed in New York with great Consul Generals and Consuls over the years and certainly Consul General Dr. Konstantinos Koutras has been one of the best. Their continual support over those years has added to the reason why this is the largest Greek Independence Parade. It also helps by its strength in numbers to influence American policy towards Hellas more than any other single event.

PK:  Many higher elected US Officials are invited to this great event, what’s this year’s message?

IK:  Yes, this has always been the norm with many Local, State, and National leaders marching and enjoying being a part of the parade as well as the parade dinner the evening before. Being politicians they more than most understand the message of the vitality, power, and significance of the Hellenic American polity within the U.S., as demonstrated by the parade.

PK:  What is our message to Greek politicians and what can we expect from them?

IK: I say you are welcome to join us in New York with open arms as fellow Hellenes, regardless of political affiliations and parties, to celebrate with us and the broader American Philhellenic polity that which we as Americans and Hellenes share in common with our fellow American citizens. That commonality is the spirit and belief in the fundamental ideas of Hellenism, Freedom, and Democracy, the basis of the Hellenic Revolution as well as the American one. We want from the Hellenic officials and expect only honesty, integrity, and equality as fellow Hellenes.