Meet the man who helped make the gyro sandwich a national food.

Peter Parthenis Sr. came from the small village of Vonitsa, Greece and used his skills as an automation engineer to bring the gyro out of the restaurants of Greektown, Chicago to the rest of America.

Driving the company is the Hellenic and family values that the Parthenis family hold dear to their hearts.

Peter Parthenis Sr. was born and raised in Greece when the Germans occupied the country, a time of war and destruction.

“I lost my father because of lack of hospitalization and medical care when I was 40 days old,” he says.

Parthenis and his two older sisters were raised by their mother, supported by grandparents, cousins, and uncles.

The children attended school in the village and went to high school in Lefkada, but they were too poor to go to university in Athens.

As a young kid, Parthenis was influenced by America’s rebuilding of Europe at the end of World War II.  Americans provided Greeks with dry milk, butter, cheddar cheese and, most importantly to him, movies showing what life was like in the United States.

He had always been interested in mechanical things bikes and engines, even as a young child and fell in love with the American automobile.

Parthenis wanted to pursue an education and heard about a young man from the next village, working nights as a waiter in Chicago who was able to make a living and pay to go to university.

He made arrangements to come to Chicago, bringing with him all that his family had taught him.

“When we left the little village of 1,200, what we took with us were family values, honesty, hard work, and no entitlements, you have to work for it,” he says.

Peter Jr. remembers his father’s strong work ethic growing up in Chicago and his mother’s discipline and kindness.

“The values were around being honest and authentic, a good work ethic, having discipline in life,” he recalls. “Being a responsible person and independent was something my parents instilled in us.”

He took a robotics engineering job outside of Chicago but discovered he could make more money working as a waiter in a high-end restaurant than what they were paying him.  He left after about nine months.

He started his own company manufacturing rotisseries for the local restaurants to cook gyro meat.

As time went on, he realized the restaurants were more interested in buying pre-made gyro meat cones and pita bread.

“When I made the rotisseries I used to go around to restaurants to promote the gyro sandwich and sell my machines but I realized that when I gave them the recipes and showed them how to do the meat in the restaurants, they had a hard time.”

He solved that problem by setting up a small factory, Gyros, Inc., his entry into the food business. 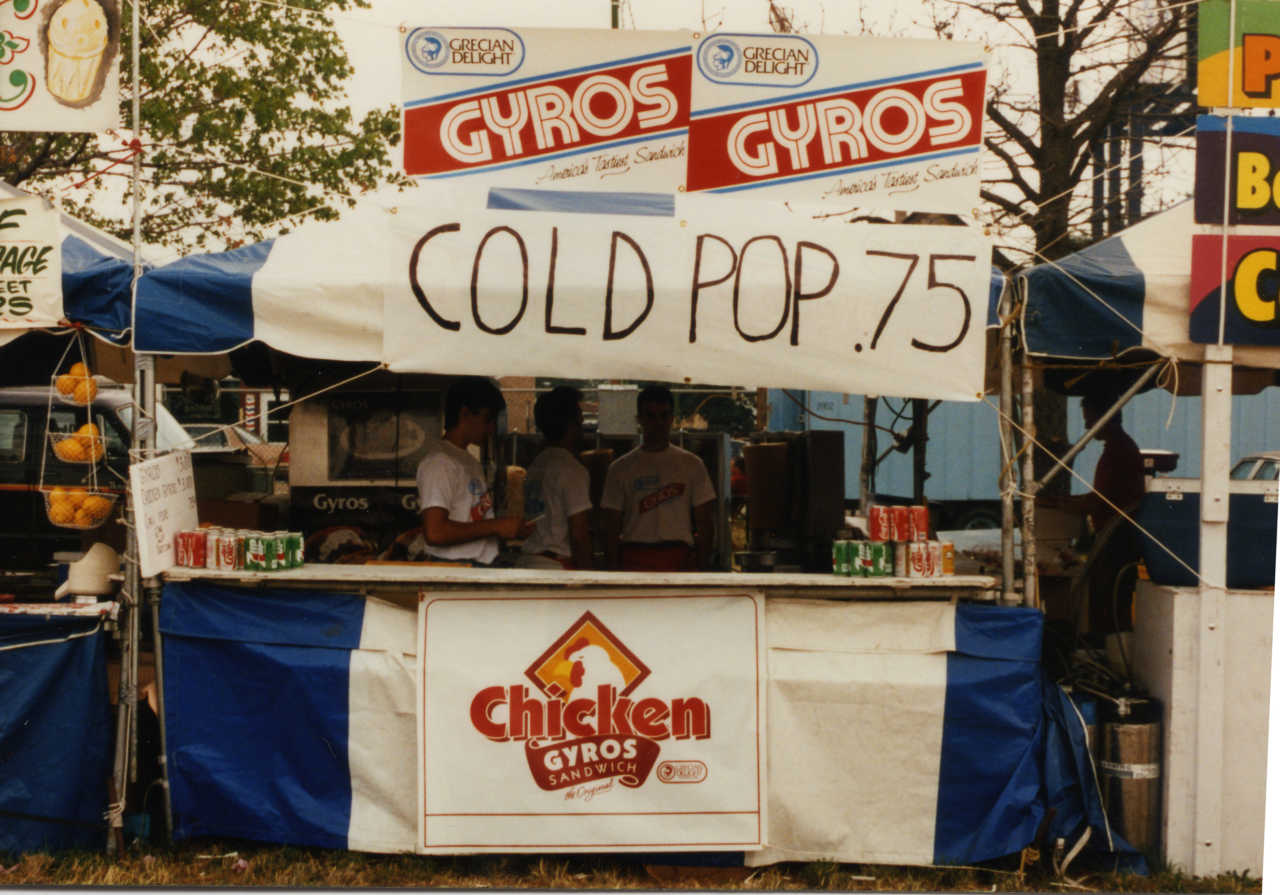 Parthenis wants one thing made clear. He did not bring gyros to America.

“The Greek restaurants in Greek Town in Chicago introduced the gyro to America. I was the first one to take it out of Chicago and make it a national product,” he explains.

Gyros were really popular in the Greektown restaurants so he decided the time was right to start making gyro cones, pita bread, and tzatziki sauce.

Originally the gyros were made by hand, 40 to 50 pounds of cones.

“It used to take 30 minutes to do one if you had strong muscles. I remember finding people with strong muscles was difficult and we were terrified if somebody was good at it and quit, we wouldn’t be able to produce,” he says.

Using his automation expertise, he brought in equipment from Germany and was the first one in the world to change the manual process to an automated one. Now one cone could be made in one minute.

“That’s where my engineering came in and helped the company be very profitable and be able to supply a big part of the United States,” he says.

Parthenis has always loved machines, engineering, and automation and was a top student in physics and chemistry in high school.

“I did enjoy it and I still do. In my company I still get involved with the automation process,” he says.  “I love designing machines that do particular jobs, that monitor themselves.”

As time went by, the Parthenis family began to offer more Greek products under the company name Grecian Delight.

The company name changed again, as did its leadership. Peter Parthenis Jr. took over as president and CEO about 13 years ago. The company today has two production facilities, 353 employees with products shipping around the U.S. Canada, Saudi Arabia, England and down to the Caribbean.

Peter Jr. never felt pressured to run the family business, but he felt a sense of obligation and saw a wonderful opportunity—to grow the company and give back to the family.

Growing up, he would walk the plant floor with his father, observing and shadowing his successful father.

The real work began when he graduated college and came to work full time.

“I literally started the day after I graduated out of college. I graduated on a Sunday. I started working on Monday,” so eager was he to get started.

He and his father devised an eight-year succession plan. Peter Jr. started as a supervisor on the plant floor. He worked his way up through sales, marketing, finance and finally, president and CEO.

“We’ve been blessed with wonderful production and capabilities and equipment. What I’ve done is expand our offerings so what was once tzatziki is now tahini sauces, garlic dips, feta cheese dips, multiple, different flavors of hummus.”

In a bakery dominated by pita and pocket pita bread, Peter Jr. uses the same equipment to also make naan bread, lavash bread, pizza crust, a variety of other flatbreads.

There’s also a focus on developing customized products to its customers.

“We believe in innovation and invest heavily in a lot of R&D t to expand our offerings to the marketplace. I’ve really accelerated the company’s growth beyond just Greek cuisine and into Mediterranean-inspired foods,” he says.

He likes to trace the company’s history through four decades.

The first decade was about focusing on and selling the most popular street food Greece, the gyro sandwich.

The second decade evolved beyond the gyro sandwich to other Greek foods.

In the third and fourth decades, they went to market with Greek and Middle Eastern cuisine under a Mediterranean and East Mediterranean umbrella.

“We watched the food trends that are constantly changing and we jump at the opportunity when the trends change that are there,” says Peter Sr.

Mediterranean foods, which are both healthy and tasty, are hot items with consumers these days.

“We always pay close attention to our customers and their needs and where the market trends are going,” Peter Jr. says.

Grecian Delight Foods has been successful in shaping U.S. food trends by observing what’s trending internationally and bringing it to America.

Peter Parthenis Sr. met and fell in love with his wife, Ethel, while they were both students at the University of Illinois. They married in 1973 and raised “three beautiful kids;” Peter Jr., Stacy, and Tina.

Today he and his wife live in Inverness, a suburb of Chicago, surrounded by his loving children, their spouses, and eight grandchildren.

Stacy and Tina work part-time in the company while raising a family.

As for Peter Jr., Peter Sr. praises his work on behalf of the family and the company as he pursues two missions: to grow the company and “grow the cohesiveness and the harmony in the family.”

“The harmony in the family has a higher priority than growing the business,” he emphasizes, adding, “He’s doing a beautiful job.”

He pointed out the advantages of being a family business.

Family businesses have deep relationships with customers over many years that are beyond transactional.

“With a family business you have a long term view. Some public companies have to hit quarterly earnings. We’re playing for the long run. I think that gives us an advantage,” Peter Jr. says.

Peter Sr. described their family as “very close,” partly because of those values he learned from his parents.

Peter Jr., who learned discipline, perseverance and the knowledge of right and wrong from his parents, agreed that the family and Hellenic values they carry are a successful formula for success.

Now he’s passing on his Greek heritage and values to his own children.

“We want to make sure they understand the language, understand our culture and history,” he says.

Part of Peter Parthenis Sr.’s mission has been to help others, Greek and non-Greek alike. He has served as president of the Scleroderma Foundation of America. He discovered the Foundation after he was misdiagnosed with the ailment and was looking for information and help.

He supports the Archdiocese of the Greek Orthodox Church in America as well as individual churches and nursing homes.

He also offers high-profile support to the National Hellenic Museum in Chicago as its first vice president. He not only supports it financially but also helps with its management.

“It’s a unique institution in America and in Canada,” he says. “I think the National Hellenic Museum has enormous potential”.

The essential mission of the museum is to pass from one generation to the next “what makes us all Greeks, our culture, our heritage, our food, our music, our dancing.”

They are now cataloging and creating videos documenting the experiences of Greek-American immigrants. The project will eventually be available on the internet for everyone to see.

People will be able to find out about different families, where they come from, their history and their experience.

“It is important to know where you came from and to remind you what made you successful,” he says

The hope is to instill in newer generations of Greek-Americans the passion of their heritage seen in older immigrants.

“The light is there but it’s not as strong,” he says.

Peter Sr. said his goal now is to stay healthy and stay close with friends and family as the responsibility of running Grecian Delight Foods rests with his son. He appreciates the blessed life he has.

“I keep saying my life is good over and over,” he says. “There’s no need to change anything.”

Peter Jr. hopes to keep doing what they are doing as they heavily invest in research and innovation and to keep offering a wider range of products.

He continues to look to his father for inspiration.

“He helped shape the trends of Greek and Mediterranean foods in the U.S.,” he says.

And so, he takes to heart his father’s advice.

And, “Let’s work with a smile because when the smile goes away it’s time to do something different.”

THI is Hosting Its First Ever Speaker Series in Washington, DC

The Greek-American Volunteers of the Greek Battalion, WWII

Tourism is on the rise for Greece! Shares GNTO Director, Greta...