There are multiple reasons to explore the ancient Puglia region on the heel of Italy’s boot from Renaissance palaces, extraordinary seafood, mystery churches to a dictator’s folly.

This is the first of a two part series on the Puglia region – or Apulia as it was known in past days. Classic archaeological ruins, villages of feudal-era architecture, centuries old pilgrimage paths and intensely blue water show you why the Puglia region has been desired by Phoenicians to Mussolini.

As the eastern most section of the Italian peninsula Puglia is on busy trade routes across the Adriatic, Ionian and seas beyond. The mercantile empire of Phoenicia established colonies followed by the Greek city-states as their influence rose in dominance. The Romans dubbed the coastal areas of Puglia “Magna Graecia” (Greater Greece) and Hellenic culture greatly influenced Roman Italy.

Puglia’s commercial significance continued even through the lengthy and often chaotic era of the feudal states before Italian unification in the latter 19th century. The proliferation of protective coastal towers, many within view of each other, do broadcast how desirable the Puglia region has been. Having the nearest (most eastern) ports on the Italian peninsula to the Middle East, tradition holds that St. Peter disembarked in Puglia on his first mission to Rome.

In a land of Palazzos

There are grander mansions in Morciano di Leuca than the 19th century Palazzo Laura but not many where you can be a guest. The spacious house offers comfortable (not luxury) accommodations. The front door opens up to an impressive courtyard. At the far end, passing through iron gates, is a sizable and peaceful garden.

Prosciutto, cheeses, breads and pastries, fruits and espresso dominate the breakfast buffet. It is a delicious way to prepare for a day of exploring.

The fortified 16th century Baronial Hall (Serafini Palace) in Tiggiano was the Serafini family home for over 400 years, and they still live in the region. Despite its current use as Tiggiano’s Municipal Hall its architectural integrity is remarkable. Part of the palace is a museum of daily life in the region over the past centuries (including an early 19th century mousetrap). Yet much of the building reflects the life of Puglia’s noble families.

Period works of art, intricate architectural detailing, original ceramic tile floors from Naples and even a small marble chapel off the Baron’s office – now the municipal council chambers – gleam as in the past. From the rooftop the views of Tiggiano are enviable. Despite being a fortified structure – like so many of the noble houses ­­– the coroneted ridge on the rooftop perimeter was to kept snakes from entering the palace.

Of equal beauty is the extensive garden with its private forest. The garden still grows grapes, olives, a variety of fruit trees and ornamental plants. Of particular interest is the tall stone tower pigeon coop! By law raising pigeons for profit (food) was the monopoly of the aristocracy. Pigeon coops were designed to allow the birds freedom to fly, but they’d return to their condo-like roost at night.

There is no admission charge to the Serafini Palace. It is as much a public space as a city hall. An international film festival is held in July on palace land next to the garden.

Nearby Alessano is known as the “city of palaces.” The Mayor of Alessano, Mrs. Francesca Torsello, explained that during the 16th century it had a population of over 1,000. The town flourished during the Renaissance with olive oil export as a major industry. A number of wealthy families moved to Alessano, and politically it was important even to the powerful House of Gonzaga, the princely family that ruled Mantua far to the north.

In the 15th and 16th centuries Alessano had a significant Jewish community. The former Jewish quarter is still today called Via della Giudecca in the old quarter of Santa Maria where they had their shops, school and synagogue. Yet this was a segregated ghetto. At night its gates were shut, and its residents could not venture out into town.

Three palazzos in Alessano are noteworthy:

The enormous 15th century Palazzo Ducale is now an event center and guesthouse. Princess Isabella del Balzo brought the fief of Alessano in 1500 as her dowry upon her marriage to Duke Ferdinando Gonzaga.

A wealthy olive oil merchant, Donato Legari, built the 16th century Palazzo Legari. Known for his hospitality, Donato Legari always had a table set with food and wine for visitors and guests. He’s quoted as saying, “I want to build this palace for myself, family & friends.”

Since 1986 Palazzo Legari has been owned by the municipality. It houses the municipal library and the historical archive. It is open to the public.

Across the street is the 15th century mansion, Palazzo Sangiovanni, with a distinctive and purely decorative zigzag stone facade. The Beck beer family owns the palazzo today as a private residence.

Religious tourism since the days of St. Peter

Alessano has been an ecclesiastical center for centuries. The Chiesa Madre SS Salvatore dominates Alessano’s main square, Piazza Don Tonino Bello. The impressive structure has elements of Romanesque and Renaissance designs that were recreated during its reconstruction between 1776-1845. The honey colored stone – a hallmark for the architecture of Puglia – is not marble. It’s the local stone pietra leccese. It’s softer than marble but can be similarly fabricated.

During a renovation in 1981 workers found the perfectly preserved body of a 19th century bishop in a wall near an alter. He was supposed to have been interned within the alter, but somehow they forgot the body. Yet the preserved state of the bishop indicated to many a saintly miracle. One of the interior’s gems is a red wooden box that is still a functioning pump organ dating from 1778.

A “hidden” spot in Alessano, is the fairly new Cimitero di Alessano. The impressive marble family mausoleums are set within a tranquil park. This includes the tomb of Monsignor Don Tonino Bello (1935-1993) an Italian Bishop currently a candidate for beatification – one step away from canonization as a saint in the Roman Catholic Church. The cemetery has become a destination for pilgrims.

Of greater importance is that Alessano has been an essential stop since the 4th century on the pilgrimage walk (or today a bike ride) that follows the route St. Peter is believed to have used on his first trip to Rome in the middle of the first century (although there is no proof that St. Peter was ever in Italy or Rome). It was in the 4th century that the first Basilica Santuario di Santa Maria de Finibus Terrae was dedicated in Italy’s eastern most port of Santa Maria di Leuca. (The port is the closest city in Italy to Jerusalem).

Just a short walk from Alessano in Barbarano del Capo is the unique Santuario di Santa Maria di Leuca del Belvedere, known as Leuca Piccola. (“Little Leuca”). Built at the end of the 17th century by local nobleman and entrepreneur Don Annibale Capece, the church was a way-station and hostel with an adjacent major market to service pilgrims. The Santuario of Santa Maria di Leuca del Belvedere, restored in 1988, was designed to be a smaller reproduction of the Basilica of Leuca as it was in 1685.

The pilgrimage path from Barbarano del Capo meanders through tranquil countryside past olive groves and stone quarries. At the entrance to the village of Patu is St Peter’s Well believed to have been used by the saint to baptize early Christians. Patu itself is home to two revered stops on the walk.

The Centopietre (Church of 100 Stones) constructed in the 9th century is an oddity. Almost like Stonehenge, the simple one story building is constructed of 100 massive carved stone blocks. It’s believed to have been used as a church, but evidence is sketchy. It’s adjacent to the Byzantine-Romanesque style 10th century Church of San Giovanni Battista. The church has a simple exterior but a graceful soaring interior.

The eastern destination of the pilgrimage is the Basilica Santuario di Santa Maria de Finibus Terrae in the city of Santa Maria de Lucea. Since its original dedication in the 4th century, the Basilica has undergone numerous alterations and expansions. It commands a stunning view of the sea high on a cliff overlooking this resort city where the waters of the Adriatic Sea merge with those of the Ionian.

The substantial Piazza Giovanni XXIII fronts the Basilica and is used for a weekly Sunday crafts market as well as a popular place to gather and take selfies. At the very edge of the cliff the 47 meter tall (154 foot) Lighthouse of Santa Maria has been guiding ships into port since 1866.

Nearby Castrignano del Capo is both famous for its Festival of St. Michael the Archangel (the town’s patron saint) at the end of September and extraordinary street light decorations. Centered on the café lined Piazza St. Michele with its 16th century Church of St. Michael, the festival is as much a cultural as religious experience. With Castrignano del Capo’s stunning street light decorations (the artist are sought after internationally) craft market, busy cafes, calm friendly townsfolk and musical entertainment, including opera arias, the festival is enchanting.

Enchanting is an adapt descriptor for this ancient land. Part two in this series will explore art, especially culinary art. Prepare to get hungry.

When you go: The southeast cities of Bari and Brindisi are the gateways to the Puglia region. Both have direct flights as well as train service from Rome. Renting a car is advisable to explore the region.

Special thanks to the Municipality of Morciano di Leuca and its mayor Mr. Lorenzo Ricchiuti, the Puglia Region (POR Regione Puglia), the Association of Municipalities “Capo di Leuca,” our enjoyable and lively guide Maria Antonietta Martella, and to Mr. Evangelista Leuzzi of Quaros Consulting for facilitating the tour. 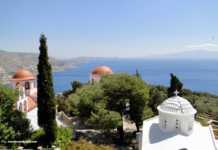 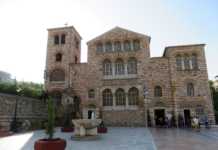 On the Road in Greece: St. Demetrios Cathedral of Thessaloniki 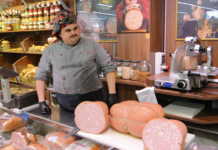 AHEPA Celebrates the Selection of Alex Karras to the Pro-Football Hall...