Special Issue: The Jews of Greece

Online sales during the Black Friday period were up compared with the rest of the year, a survey by Generation Y-International eBusiness Hub said...
Read more
Greece

The first case of the Omicron variant of the novel coronavirus has been identified in Greece, Health Minister Thanos Plevris confirmed on Thursday during...
Read more
In Greek 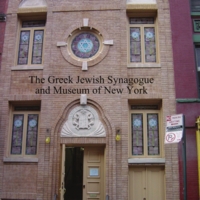 The presence of Jews in Greece traces back to ancient times. These Greek Jews, known as Romaniotes, are considered among the oldest Jewish communities in the world today. In their long history they withstood the rise and fall of many empires and thrived in their Greek homeland.
They spoke a dialect of Greek with words and phrases from Hebrew and Turkish (Judeo-Greek) and had developed their own culture and customs within the confines of the Byzantine Empire, living on the mainland as well as on some islands, like Rhodes, Chios and Samos.
However, little is known of their history and their rich tradition now stands on the verge of extinction. Thanks to Vincent Giordano’s video and photographs, we now have an insight into the rituals, customs, and traditions of the Romaniotes community in Ioannina. The Jewish population of Greece increased dramatically in 1492, after the Catholic monarchs of Spain – Queen Isabella and King Ferdinand – at the instigation of the Inquisition, issued the decree of Granada, according to which all Jews who refused to convert to Catholicism were to be expelled within 6 months; it is estimated that more than 200,000 Jews were expelled from that “cursed land.”
Thessaloniki: “Mother of Israel”

They Came from Sepharad
Following their expulsion from Spain, many Spanish Jews settled in Thessaloniki, with the largest numbers arriving in 1492-3 and 1536. Their synagogues were named after their native countries or towns. Thessaloniki also received Marranos, Jews expelled from Portugal.
The Jews from Spain and their descendants were called Sepharades or Sephardim, from the biblical Hebrew name of Spain, Sepharad. They spoke Judeo-Spanish, or as it was called Ladino, an idiom originating from the dialect spoken in Castile in the 15th century.
Thus, in the 16th-18th centuries, Thessaloniki housed one of the largest Jewish communities in the world, with a solid rabbinical tradition.

The city had become the Jewish centre of Europe, a veritable Jerusalem of the Balkans – the “city and mother of Israel,” according to Jewish poet Samuel Usque. During the 16th century, there were numerous important rabbis whose influence spread beyond the borders of the Ottoman Empire. Although Thessaloniki suffered from plagues and fires in the course of the 17th century, the city remained a centre of religious studies and Halakhah (Jewish Law), as well as an international centre of Jewish printing, as the city’s approximately 30.000 Jews constituted nearly half of its total population.
A Thriving Community
The city’s Jewish element remained dominant during the first two decades of the 20th century, and Thessaloniki enjoyed unprecedented commercial development, with Jews found in every trade and profession, as traders, bankers, industrialists, teachers, physicians, lawyers, but also tobacco and port workers.
On the Sabbath, the city and its port came to a standstill, as it was observed by the Jewish community. According to a 1913 Greek government census, out of a total population of 157,889, the Jews numbered 61,439, while 49,956 were Greek Orthodox Christians and the rest Muslims.

The author and poet Iakovos Kambanellis is a survivor of the Mauthausen concentration camp, who in the early sixties wrote “Mauthausen,” following up in 1965 with four more poems on the same topic. These were set to music my Greek composer Mikis Theodorakis in the Ballad of Mauthausen superbly sung by Greek contralto Maria Faradouri. A performance of “Mauthausen” was held at the site of the concentration camp in 1988, which was flooded by thousands of survivors and pilgrims.
Greek Jews shared common historical experiences and fought on the same fronts as the majority of their Christian fellows. However, they devoutly kept up their traditions, their way of life and love of their country of origin. It is well known that the two peoples, Greeks and Jews, share a lot of common characteristics, not least their love of freedom, the arts and literature, their cosmopolitanism and their Diaspora. Winston Churchill wrote: “The Greeks rival the Jews in being the most politically minded race in the world … No other two races have set such a mark upon the world … They have survived, in spite of all that the world could do against them … No two cities have counted more with mankind than Athens and Jerusalem..”