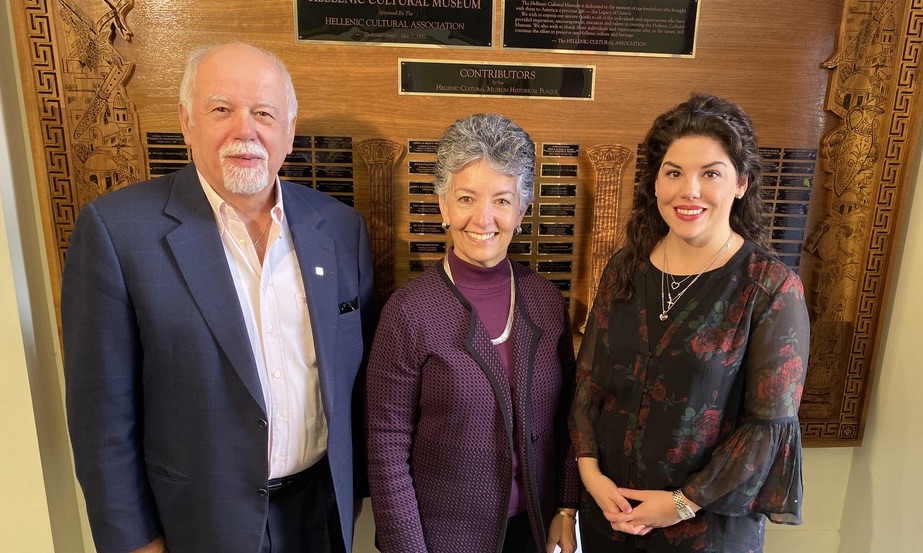 Salt Lake City, Utah, has a large and active Greek-American community. The first Greeks arrived in Utah in the late 1800s and since then, the Greek population has grown exponentially. The Greeks have become an integral part of Utah.  They have several churches, organizations, and their own museum which documents the early life of Greeks in Utah.  I was able to meet with many leaders of the community, and I  had the opportunity to visit the museum and interview the president of the Hellenic Cultural Association, Mrs. Jeannine (Eugenia) Timothy and trusted advisor, Bill Rekouniotis.

The Hellenic Cultural Association (HCA) was formed in 1986, and the Hellenic Cultural Museum opened its doors in 1992 in the basement of Holy Trinity Cathedral in Salt Lake City.  The idea about forming a museum came about when one of Utah’s Greeks, Helen Zeese Papanikolas, an acclaimed historian, started to document and thoroughly look into the Greeks of Utah in the 1950s.  Mrs. Papanikolas’s writings shaped the way the community looked at immigrant communities as she liked to emphasize the life of everyday people.

Mrs. Papanikolas had started to collect many items and contributed a display at the Rio Grande Depot Museum which contained many photos from the early life of Greeks in Utah. “The rest of our community saw that and a lot of her friends said they had to preserve this,” shared Jeannine Timothy, president of the HCA.  “The group came together and started asking for donations and artifacts, and the result was amazing.  They received donations and artifacts from people all over, and that is how the museum was born.  The museum was born from Mrs. Papanikolas’s early attempt and her work with the initial men and women who were part of the founding fathers of the HCA,” Jeannine remarked.

Along with other immigrants such as the Italians, the Japanese, the Serbians, an influx of Greek men started immigrating to Utah in the late 1800s.  They worked in the mines, herded sheep and opened “kafeneia.”  “Their goal was to work hard and pick up the gold that was supposed to be coming right off the streets in America. That’s what they were told,” shared Jeannine.  The ultimate goal was to make money to send back to their families in Greece and ensure that their sisters had proper dowries.  “But when the men arrived, they found that their new life required a lot of hard work and long days with not much pay.  The men would gather at the “kafeneia,” they helped each other, they worked together and then they started writing home for brides because they wanted to be able to settle here and have families,” Jeannine shared.

The Greek community built the first Holy Trinity Greek Orthodox Church in 1905, not too far from the location of their current Cathedral, which was built in 1925. People made a wonderful life, however, it wasn’t easy.  Unfortunately, the Greeks were not looked on very favorably due to their dark skin, dark hair, and different language and ways.  People didn’t let them assimilate easily.  “One of the stories I like to tell is my pappou and yiayia had a ‘kafeneio’ in Greektown, but they eventually moved out to South Salt Lake and they bought some land. They developed that land and also became sheepherders.   Every year they had a huge garden,  and when the depression hit and then WWII hit, the people that had not been friendly with them were starving. They came to my grandparents’ home, and my grandfather sent them home with sacks of food to feed their families and feed their children.  So, with the Greeks, Philotimo carried on into their future and later generations,” expressed Jeannine with tears in her eyes. 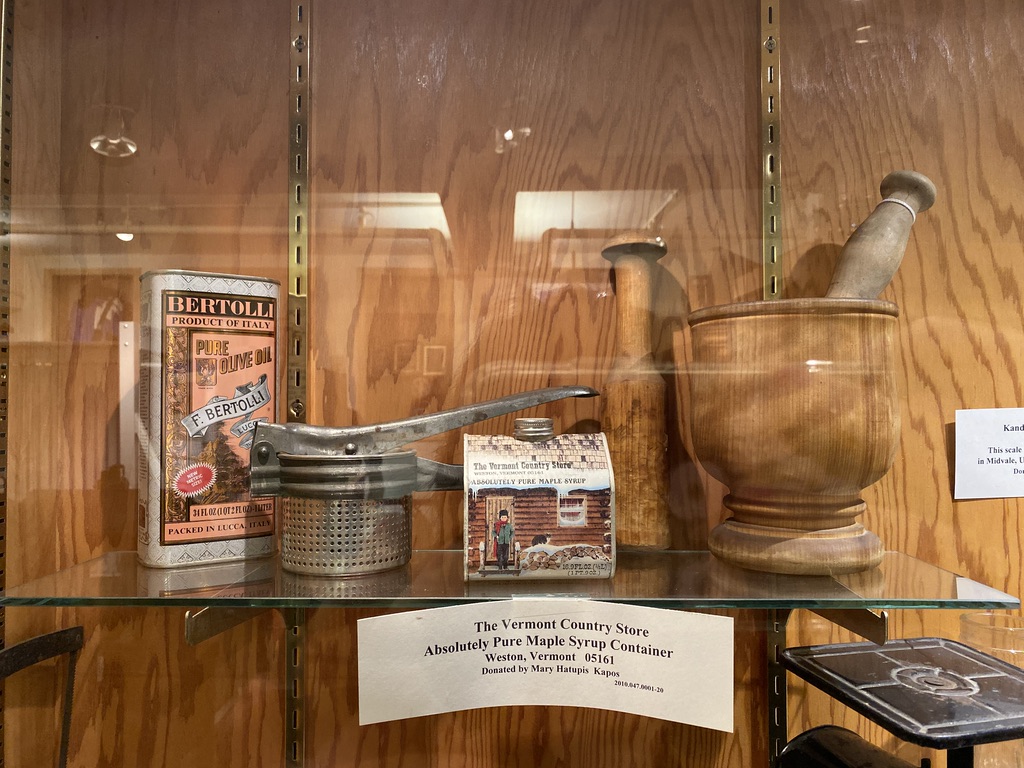 The Hellenic Cultural Museum is filled with displays of old photographs that date back to the early 1900s, dolls, books, wedding dresses, luggage that was used to bring their items over, sewing kits, shoes, clothing, utensils, medicine, newspaper clippings, flags, and so much more.  There are so many artifacts on display, that it is easy to become mesmerized by the unique history of our ancestors and what their life was like back then.  The museum has also dedicated a wall with photos of all the Greek men and women from Utah who served in the wars.

Aphrodite Kotrotsios:  What is the vision of the museum? How does it make you feel that it was the first authentic Hellenic cultural museum of the United States?

Jeannine Timothy:  The vision of the museum was to create a museum of the people in Utah and in the western states.  We have had so many of our members and parishioners donate artifacts from their childhood, from their yiayia and pappou, their businesses, so we really do have a people’s museum.  It shows the early life of the Greeks here in Salt Lake City, Utah.

Bill Rekouniotis: I feel very proud that we were the first, and we think we are still the best.  We have had other groups come in, such as Oakland, they brought a group here so they can start a museum in Oakland. We have also gone to Phoenix as they would like to open up a museum there.  I know that Portland Oregon has a museum, it opened up after us, in the early 2000s. 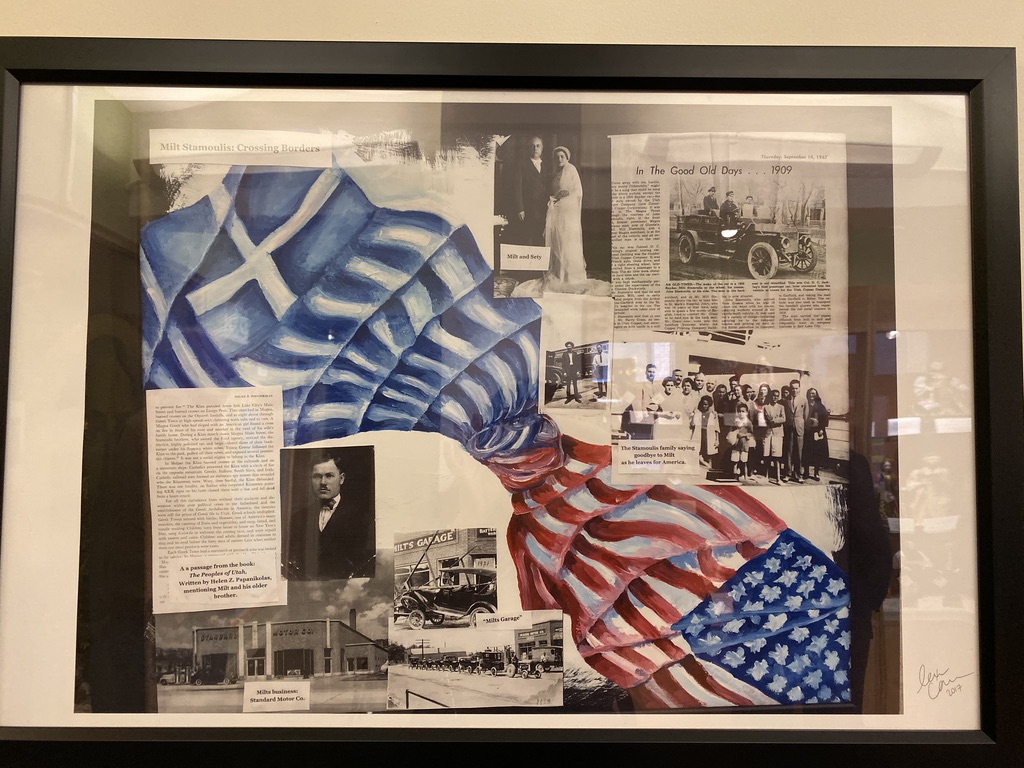 AK: What are the museum’s goals?  What is its mission?

JT:  The mission of the HCM is to preserve our heritage, preserve our culture and promote it.  We have had people come through and see the museum, we have had school classes such as elementary and junior high with their teachers visit us to learn about early Greek immigrants and what life was like.  We are a dynamic part of Salt Lake City, Utah.  So just to promote it, explain it and just be so proud of it.

AK:  What is in store for the future?

JT:  Big plans. We are in the middle of creating a new campus here on the grounds of Holy Trinity Cathedral.  Part of our new structure will include space for administration, banquet halls, Sunday school and an adjoining structure specifically for the museum.  We are excited to bring artifacts out that have been in storage for a long time for display. There will be displays lining the hallways.  We will be able to bring more groups to come through and tour the museum. It’s very exciting and it’s what we have been hoping for decades and building for and it’s going to be coming into reality.

BR:  We would like to get our own stand-alone museum, close to the Cathedral, that is large enough so we can display all of our artifacts and maybe have a curator who can open it a number of times a week to the general public.  During our festival, we have at least a few thousand people that come through the museum every year.

AK:  How can someone get involved and or donate?

JT:  Each year we have a membership luncheon that all the members are invited to.  People contact us throughout the year and let us know that they would like to join us.  There are dues that are collected, and members can put their names on the ballot to become a trustee.  We appreciate our trustees.  Also, any member can come to our meetings at any time.  Our past trustees, like Bill, we keep him coming because he is an advisor as he has so much knowledge about the association.  He’s a great asset as are our other advisors.  The museum is growing, and people are contacting us all the time with artifacts that they would like to donate.  We look at everything that comes our way and most of it we keep because eventually, we would like to showcase everything. 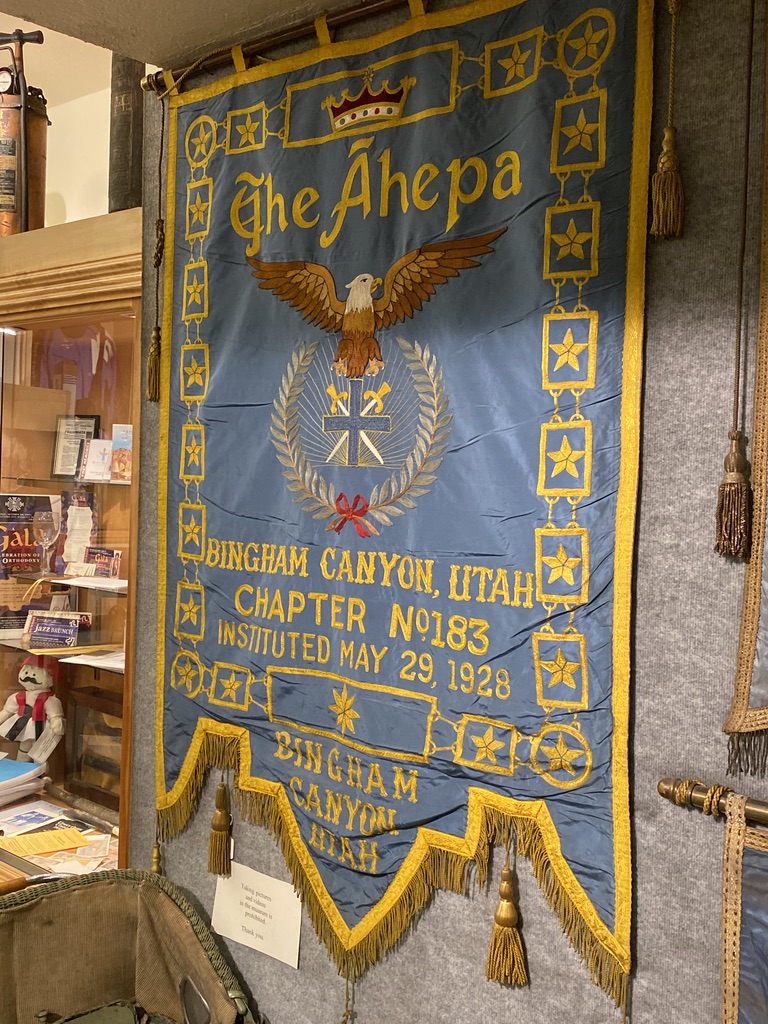 AK:  Why do you think HCA is important for our Greek-American community? What purpose does it ultimately serve?

BR:  It is important for all of us, especially for our youth to be able to see what their forefathers accomplished here in America.  Being Greek Orthodox in a predominantly LDS world was not very easy 80-years ago, 90- years ago or 100-years ago.  Now we have assimilated into this community and we are no longer pushed to one side, we are up there at the forefront with everybody else.

JT:   I think it is important for our young people. They come into the museum, they see photographs of their parents, yiayia and pappou, they see family, great grandparents, aunts and uncles and they can see the life that they led.  They can learn about the trials and tribulations that their ancestors had coming to America like Bill was stating.  I think it important for them to know how the foundation was laid down for them so they can appreciate it and what they have today and know they have strength behind them so that they can continue to progress and continue in our culture.

AK:  What would you consider to be the most unique artifact the museum has and what is the story behind it?

BR:  There is a perfect picture showing the Americanization of the immigrant Greeks who arrived here in Utah.  In the upper corner, you can see a certificate, probably naturalization papers, you can see a Christmas Tree and you can see a ketchup bottle right here in the middle.

JT:  It is also significant to show that the young woman seated at the table is dressed in all black, her husband had died, and she is in mourning and holding an infant child. The family has gathered at Christmas, you see the traditions of the Greek family, but also the American culture that has started to become part of their life here in Salt Lake.