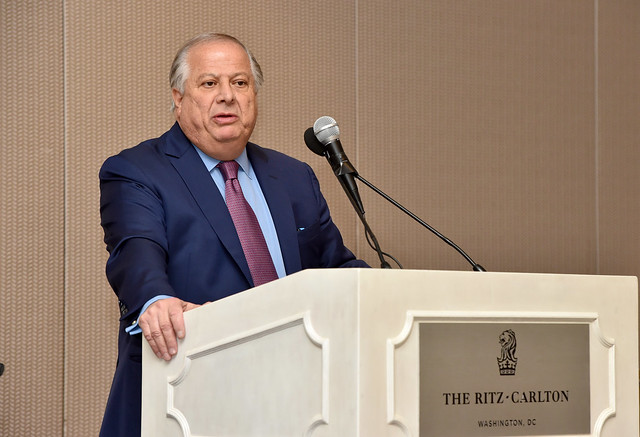 For 45 years, Cypriots have had to endure a Turkish occupation of 37 percent of northern Cyprus while the western nations looked the other way.

Now the geopolitical and economic climate is changing and new hope is emerging that the United States and Europe may be paying closer attention. The time may have come that western nations are willing to put some skin in the game.

That’s the hope of Phillip Christopher, president of the PSEKA—Justice for Cyprus, who recently concluded the 35th annual conference of his organization in Washington, D.C., playing host to top members of the U.S. Congress and Trump administration.

The International Coordinating Committee “Justice for Cyprus”, also known as PSEKA, was founded in 1975 by the late President of Cyprus, Archbishop Makarios, after the July 20, 1974 Turkish invasion of Cyprus.  Christopher is PSEKA’s third president.

“For 45 years we have been fighting this cause and we as American citizens feel there was a great injustice,” Christopher said in a recent interview. “Our government, the American government, basically looked the other way and allowed Turkey to raid the island, creating ethnic cleansing with more than 200,000 people becoming refugees in their own land and 2,000 missing people, including American citizens.”

On July 20 1974, on the pretext of protecting the Turkish minority in Cyprus, Turkey invaded the Republic of Cyprus using American-made arms, in violation of American law, taking northern Cyprus. More than 200,000 Greek Cypriots were displaced, 5,000 killed and 2,000 reported missing.

In 1983, a separate illegal Turkish state was established in the occupied northern part of Cyprus, recognized only by Turkey but condemned by the international community.

To this day, the international community considers the northern part of Cyprus as an illegal occupied territory. The Republic of Cyprus is a Democratic nation and part of the European Union. It has been a partner of America in fighting terrorism, money laundering and it has multiple bi-lateral agreements.

Christopher said in the 45 years that the Turks and its 43,000 troops have been in Cyprus; up to 37 percent of the island has been turned into a fundamentalist Islamic state.  “They have destroyed 500 churches. They have imported more than 400,000 Turkish settlers. Revisiting the occupied area you would not recognize the fact that the occupied part of the island was a Hellenistic area with a Greek population,” he said.

The PSEKA—Justice for Cyprus is an American organization fighting for the best interests of the United States. Its goals are:

Christopher was born in Kyrenia, in the occupied area of Cyprus, and immigrated to the United States when he was 10 years old.

“Like me, there are more than 5,000 American citizens who lost their properties and their homes on the island, as a result of the illegal Turkish invasion,” he said.

To put it in perspective, imagine going back to the place where you were born and the house that your parents and your grandparents lived in is occupied by a Turkish general.

Besides losing the value of your property, it’s also emotionally upsetting.

While Turkey has been shifting the occupied area to an Islamic state, the rest of Cyprus has become a respectable Democratic Republic, a member of the European Union and the United Nations.

“In 1974, they lost 80 percent of their economy,” Christopher said. Over time, the Greek Cypriots have been able to rebuild. More recently, bi-lateral relations with the United States have increased and there are now American companies thriving in the Republic of Cyprus.

“The people of Cyprus provide high-skill labor and telecommunications, besides being a tourist attraction and business attraction, because in the Middle East, which is a tough neighborhood, there are only two Democratic nations, and that is the state of Israel and the Republic of Cyprus,” Christopher said.

The Republic of Cyprus has always cooperated with the United States in fighting terrorism and money laundering, Christopher said. The United States can station ships in Cyprus and the United Kingdom has a major military base in the island. Time and time again during a Middle East crisis, American Marines have been welcome in Cyprus.

The discovery of hydrocarbon gas in the Mediterranean, in the exclusive economic zone of the Republic of Cyprus, has brought more attention to the region, leading to tri-lateral agreements between Israel, Cyprus, Greece and Egypt.

The natural gas deposits found off Cyprus could alleviate Europe’s dependence on Russian oil.  Interest in that energy supply has made lobbying efforts against Turkey more successful. American companies like Exxon and Mobile Energy have signed contracts with the Republic of Cyprus to access that energy.

At the same time, Turkey has claimed the exclusive economic zone as theirs, backing up their claim with naval vessels, creating a dangerous situation.

Turkey has attempted to block efforts of foreign energy companies to tap the Eastern Mediterranean natural gas deposits and is conducting an intimidation campaign In order to stop the Republic of Cyprus from exploiting its own resources.

U.S. Congressmen and policymakers are recognizing that a strong partnership between Greece, Cyprus, Israel and the United States will protect and secure the best interest of America.

In May 2018, Cyprus, Israel and Greece agreed on a plan to build a pipeline to supply Eastern Mediterranean gas to Europe.

“If Turkey was behaving and Turkey was a good ally, Turkey would be the perfect place to have a pipeline running from the Mediterranean to Europe. Unfortunately, nobody trusts Turkey and will not work with them,” Christopher said.

Christopher points out that The Republic of Cyprus and Greece are willing to share the energy resources with Turkey providing they withdraw troops from Cyprus and allow the country to unify.

With the discovery of the gas deposits and Turkey’s fundamentalist shift, now is a good time for the U.S. to re-examine its policies toward Turkey and Cyprus.

These actions demonstrate that the Republic of Cyprus should be supported and a new partnership established between Greece, Cyprus, Israel and the United States, Christopher said.

The United States placed an embargo on Turkey after it invaded Cyprus that was supposed to lead to Turkey withdrawing its troops.

That embargo was lifted during the Carter Administration, with the condition that every six months, the U.S. president must give a progress report on the withdrawal of Turkish troops.

“Every six months since 1978, every president, whether Democrat or Republican, reports that there’s progress on withdrawal of Turkish troops,” Christopher said.

Yet the troops remain. “This is the ironic situation that we’re dealing with.”

The objective U.S. policy toward Turkey should be that we are not afraid to tell an ally, a member of NATO, that it has to behave and cannot be violating American law.

“We should stop the sale of the F-35 jets to Turkey and we should put sanctions up until he (Erdogan) starts behaving like a Democratic regime,” Christopher said.

He’s hopeful that the Trump administration will take action against Turkey and that a partnership will be formed with the U.S., Greece, Cyprus and Israel, with the help of the U.S. Congress.

The U.S. Senate and the U.S. House of Representatives are considering three pieces of legislation that would end the embargo against the Republic of Cyprus and create a formal Eastern Mediterranean partnership between Greece, Israel, Cyprus and the United States.

It would allow the Republic of Cyprus to buy arms from the United States for anti-terrorism efforts. The Republic is asking for PT boats, rifles and small arms.

The legislation would also reinforce the demands that Turkey withdraw its troops from Cyprus, recognize the Republic of Cyprus, allow Turkish and Greek Cypriots to reunify the island and allow refugees to go back to their homes.

“We’re optimistic that this legislation will pass,” Christopher said.

Since Turkey’s invasion of Cyprus, there has been a U.S. military arms embargo on the Republic of Cyprus, for fear of an arms race there.   At the same time, in the occupied area, Turkey has 43,000 troops backed up by American-made arms, tanks and military equipment.

“This is a joke,” Christopher said.

The legislation also institutionalizes a more informal tri-lateral agreement of cooperation between Cyprus, Greece and Israel and brings the United States into the game.

The fact that U.S. Secretary of State Mike Pompeo attended the sixth tri-lateral summit in March is a good indicator that the United States might be ready for this partnership and ready to send a message to Turkey

This year’s annual Washington, D.C. conference of the PSEKA Cyprus and the Hellenic Leadership Conference in early June saw a record number of U.S. policymakers attending, including the top 50 policymakers form Congress and the Trump Administration who met with national Greek American leaders. Forty one U.S. Senators and Congressmen attended.

PSEKA Cyprus has vast bi-partisan support because the Cyprus issue has been a bi-partisan concern in the United States Congress.

“We recognize that 45 years have elapsed. Many members of Congress don’t remember what happened in 1974 and weren’t even born,” Christopher said. That’s why PSEKA does what it can to educate American policymakers on the Cyprus situation.

Turkey’s value to the U.S.

Traditionally, Turkey has had geopolitical and geographic advantages that the United States wanted to exploit relative to the Middle East and NATO.

In fact, the United States has a base in Turkey and the country continues to have strong support from the Pentagon. Turkey spends millions of dollars on a public relations campaign, seeking continued support from the State Department, the Pentagon and the U.S. Congress. “They have many retired military officials that are on the payroll of Turkey. They have many ex-Senators and Congressman that are on the payroll of Turkey. “

“They are no longer the so-called reliable ally of the Western World. It has often been said that Turkey was an example of a secular Muslim country. It is now the opposite,” Christopher said.

Turkey has actually been an unreliable ally. According to Christopher:

“Forty five years after the illegal invasion (of Cyprus), It’s time to tell the so-called ‘reliable ally’ to live by our Democratic values.”

The European Union has denied Turkey membership unless it changes its human rights record and withdraws from the occupied area of the Republic of Cyprus, Christopher pointed out.

The Turkish government under President Erdogan is a fundamentalist country that is exporting Islamic fundamentalism, Christopher said.

“Their first conquest is basically the occupied area of Cyprus. They made no secret of the fact that that is their objective.”

Other evidence is their foreign policy against Israel, their continuous violations of the air space of Greece and recent invasions into the economic zone of the Republic of Cyprus claiming the natural gas deposits belong to them.

“It’s just a policy of a neighborhood bully, basically just using their strength to get their way.”

If a conflict between the United States and Iran were to occur, our base in Turkey becomes useless, Christopher said.

“Erdogan thinks of himself as the leader of the Muslim world. He has a conflict with Saudi Arabia, Egypt, Syria and Israel. His rhetoric regarding the Islamic fundamentalism is not helping and his support of Iran and his willingness to partner up with Russia is not helping the United States,” he said.

Learn more about the situation in Cyprus and about the efforts of the PSEKA by visiting their website.

Edward Giannaros continues the legacy of helping the Greek-American community