In Memoriam Demetrios Zemenides  1942-2020 The International Coordinating Committee – Justice for Cyprus (PSEKA) mourns the passing of Demetrios Zemenides, one of its long-time collaborators in Chicago.  The...
Read more
Featured

The people close to the St. Nicholas Greek Orthodox Church and National Shrine at Ground Zero in New York tend to think of the...
Read more
Culture

“All truths are easy to understand once they are discovered; the point is to discover them,” by Galileo di Vincenzo Bonaulti de Galilei, an Italian astronomer, physicist, and engineer.1Hagia Sophia...
Read more
Featured

Debbie Matenopoulos is the co-host of "Home & Family" on the Hallmark Channel. She chatted with HNA's Markos Papadatos about her show, cookbook, and...
Read more
Community Organizations

Brooklyn AHEPA Chapter 41 held a monthly meeting on August 5, 2020 virtually via Zoom due to the COVID pandemic. On the agenda was...
Read more

By  Lisa Radinovsky and Maria Loi

Appointed Ambassador of Greek Gastronomy by the Chef’s Club of Greece, celebrity chef Maria Loi celebrates the flavor and healthiness of the olive oil rich Greek diet. Loi recently took time out from cooking at her Loi Estiatorio restaurant in midtown Manhattan, New York to share her thoughts about olive oil and the Greek diet with Greek Liquid Gold.

As reported on the website of the World Happiness Summit, where Loi discusses “Achieving Happiness with the Greek Diet,” she embarked on her New York restaurant adventure six years ago. Before that, she reached millions of Greeks with dozens of cookbooks, including the official cookbook for the 2004 Olympics in Athens. Loi has appeared on television many times in both Greece and the USA, most recently on Live with Kelly and Ryan. She has also participated in numerous charity events and chefs’ panels, as well as preparing a meal for President Barack Obama and guests at the White House in 2012.

This is a slightly edited version of Maria Loi’s interview with Greek Liquid Gold; a cake recipe from her Greek Diet cookbook follows.

1.) Briefly, coming from a Greek village, how did you end up with major American TV appearances and a famous restaurant in New York City?

My journey from Thermo, Greece to NYC has had many parts, including my previous life as a jet-setting lobbyist for major telecommunications companies and shedding that “skin” to go back to my roots…. By learning all about Greek cuisine, ingredients, history, and heritage, I was able to follow my passion, cook with my heart, and become a chef and TV personality in Greece. Always thinking about my father’s words, “There’s nothing you cannot do – it’s only if you don’t WANT to do something,” and knowing the world is a big place, I heard Frank Sinatra in my head, “If you can make it there, you’ll make it anywhere,” and I decided New York was the right place for me!  Through hard work and determination, I have achieved success, as I work to change the world, one healthy Greek bite at a time!

2.) How would you describe your duties as the Ambassador of Greek Gastronomy?

My mission in life is to change the world, one healthy Greek bite at a time. As the Ambassador of Greek Gastronomy, it is my duty to spread the word about how tasty, healthy, and easy Greek cuisine really is. I want people to understand how accessible eating Greek is, and how delicious and nutritious following the Mediterranean/Greek Diet is. We, the Greeks, gave the world everything — math, philosophy, politics, science, literature. Of course, we gave them the basis for cuisine too!

3.) Do you have childhood memories of Greek olive oil and olive groves?

Growing up, my house always smelled like olive oil — the fragrance came from our cellar, where we stored barrels of the olive oil we would make every harvest season. I remember planting hundreds of olive trees with my father, and caring for them in order to get the best fruit for the harvest.

4.) Did your mother and grandmother tell you anything memorable about Greek olive oil?

They told me so many things about olive oil — how good it is for my hair, my skin, my body, even my soul! Greek Olive Oil belongs in everything we do; we Greeks are fortunate to have the best olive oil in the world, and so we need to use it.  My grandfather used to feed us a spoon of olive oil every day, like medicine. While some people say “An apple a day keeps the doctor away,” in my family, we felt that way about olive oil!

5.) How would you describe Greek olive oil, in general?

Greek olive oil is liquid gold. It’s vital to my existence, my ability to function, to cook, to live! It’s grassy, fruity, peppery, luscious and light — it’s full bodied and robust, yet soft spoken and subtle.

6.) What led you to appreciate olive oil?

My childhood — planting the trees, caring for them and the land with my father, being a part of the harvest, tasting the first drops from the “elaiotriveio” (olive mill). Olive oil is part of my blood; it’s part of who I am!

Olive oil is part of all my foods, even my desserts at Loi Estiatorio! It’s the only fat I use, and I use it in everything, from salads and soups to proteins and desserts. There’s nothing in my kitchen that isn’t kissed with olive oil in some way or another!

8.) Why do you use and recommend olive oil?

For starters, it’s good for you! It’s full of MUFAs [monounsaturated fatty acids] and polyphenols (specifically oleocanthal) that are full of antioxidants which help ward off all kinds of illnesses, as well as being beneficial for satisfaction and weight loss — you need good fat to fight bad fat! Added to that, it’s also delicious and lends different qualities to foods depending on how you use it, which is important for me as a chef!

9.) Do you use different kinds of olive oil when cooking for famous people like President Obama?

I use the same olive oil for everyone, whether I am feeding the homeless man down the street (which I do), or President Obama. Everyone should eat well and properly — that’s how I feel.

10.) What is one of your favorite dishes that is rich in olive oil?

Horiatiki Salata. The traditional Greek Village Salad with Dakos (Cretan Barley Rusks) is meant to be enjoyed with olive oil, and I always add a lot! I want the ripe tomatoes to bathe in the olive oil, and the dakos to be softened by olive oil. Truly, olive oil makes all the ingredients sing!

11.) What is the most important advice you would like to give home cooks about using olive oil?

First, use extra virgin olive oil to cook with — the better the quality of oil, the higher the smoke point. To see if you’re using the right temperature for cooking with olive oil, add the olive oil to a cold, dry pan, and place it over your heat source at medium heat. As the olive oil heats up, it will begin to appear shiny and seem much “thinner.” Once it begins to look hazy, you’re just below the smoke point — that’s the hottest point you can cook at before the beneficial qualities of the olive oil are broken down.

Also, you can use olive oil in dessert; there’s no need for butter! You just need to combine the olive oil with another ingredient (like vanilla or honey) before incorporating it into the recipe, to break up the flavor. Then you get the richness of the olive oil without the grassiness.

12.) Have you been able to convince any celebrities to use olive oil?

Yes, many! Once they eat at Loi Estiatorio, it’s easy to convince people that eating Greek is tasty, healthy, and easy — and it all starts with good olive oil!

This cake highlights the fruit-forward qualities of the olive oil, while balancing out the citrus notes from the lemon. You can substitute a different citrus fruit, or even add some fresh herbs to make this cake yours — I love adding some fresh lemon thyme and serving it with a dollop of yogurt. 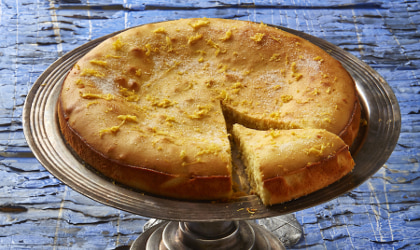 1.    Preheat the oven to 350°F. Coat a 9-inch spring-form pan with a little olive oil. Cut a round of parchment paper to fit the pan, place it on the bottom of the pan, and coat it liberally with some olive oil.
2.    In a small bowl, whisk together the flour and lemon zest. Set aside.
3.    In a medium bowl, with an electric mixer or an eggbeater, beat the 5 egg yolks and ½ cup of the sugar on high speed until the mixture is thick and pale, 3 to 4 minutes. Reduce the speed of the mixer/beater to medium-low and slowly add 1 cup olive oil and the lemon juice, mixing them until just combined. The batter might look as if it has separated, but that’s okay! Using a wooden spoon, mix in the flour mixture just until combined. You don’t need the electric mixer for this step.
4.    In another bowl, with the electric mixer or the eggbeater, beat the 4 egg whites with the salt at medium to high speed until foamy. Continue to beat as you slowly add the ¼ cup sugar, and keep beating until soft peaks form, 3 to 4 minutes.
5.    Carefully fold about one-third of the beaten egg whites into the batter and then gently but thoroughly fold in the rest of the egg whites.
6.    Transfer the batter to the prepared cake pan and gently rap the pan against a hard surface to release any air bubbles that may have formed during the mixing process. Sprinkle the top of the cake with the remaining 1½ tablespoons sugar.
7.    Bake the cake for about 45 minutes, or until it has risen, is a beautiful shade of gold, and a toothpick inserted into the center of the cake comes out clean, with no traces of uncooked batter.
8.    Allow the cake to cool in the pan on a rack for 10 to 15 minutes. Run a knife around the inside edge of the pan and release the spring-form sides. Let the cake cool and rest for another hour. Flip the cake over onto a plate. Remove the bottom of the pan and the parchment paper.

*Tip: Cake flour is much preferred because it has less gluten, and therefore makes the cake light and fluffy, but if necessary, all-purpose flour can be substituted. However, the cake will be denser, with a much closer crumb structure.

Thanks to Maria Loi for the photos of her and of her cake, and to the World Best Healthy EVOO Contest for the photo of Loi with Dr. Stefanos Kales at the awards ceremony in 2017.

All businesses, organizations, and competitions involved with Greek olive oil or agrotourism or food tourism in Greece are now invited to consider new advertising and sponsorship opportunities on the Greek Liquid Gold: Authentic Extra Virgin Olive Oil website, which reaches readers in more than 175 countries around the globe.