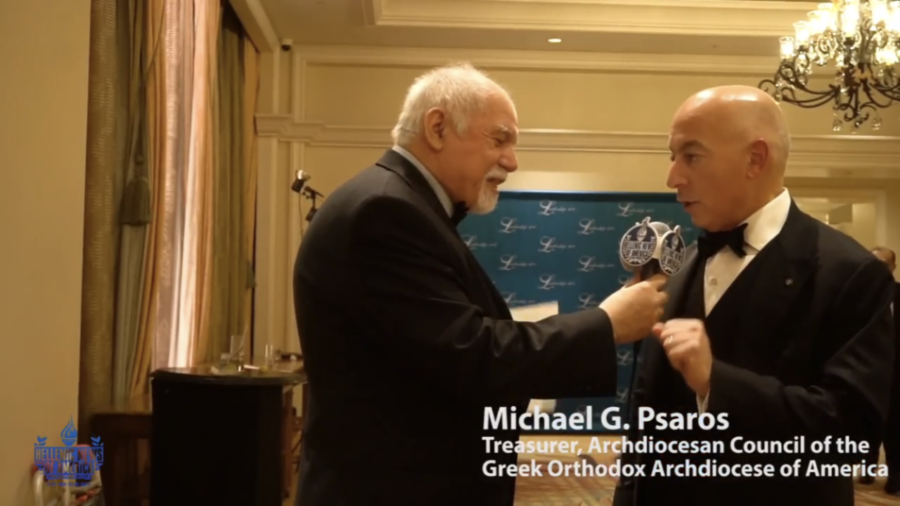 Michael Psaros, a member of the Leadership 100 Board of Trustees, took a moment during the Leadership 100 banquet in Miami, Florida Feb. 3 to talk to Hellenic News of America publisher Paul Kotrotsios about recent financial reforms implemented at the Greek Orthodox Archdiocese of America.

Psaros also serves as treasurer of the Archdiocese.  A financial crisis and a deficit brought on by spending and management problems led to the reforms.

He reported that the Archdiocese has “achieved financial stability.”

“We now have a right-sized, cash-flowing, solvent, surplus-generating, properly run organization,” he said, adding that the changes over the last six months are “truly stunning.”

There is new lay level leadership and a new independent audit committee, headed by Elaine Allen, one of the most recognized not-for-profit accountants in the country, he said.

There is a new finance committee chairman.

In addition, assessments for the Parishes have been frozen at the 2017 level, saving the Parishes about $1.6 million “in checks that they didn’t have to write.”

“Then we reduced spending by $8 million, which represents 25 percent of the Archdioceses’ operating cash costs.”

The Archdiocese has implemented internal operating controls on spending, as well as policies and procedures that were completely absent before. There was an exhaustive operations review that led to 64 pages of recommendations that will become enforceable policies.

His Grace Bishop Andonios has been put into the position of head of administration and a new position of Chief Financial Officer has been created.

“Mistakes have been made,” Psaros acknowledged. “A crisis may have occurred but everyone associated with that crisis has been terminated. They have no association whatsoever with the Archdiocese.”

“We are looking forward now,” he said.