Interview with Jeff Timmons from 98 Degrees: ‘That Girl’ 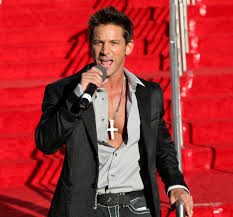 Jeff Timmons, best known as the founding member of the Grammy-nominated pop group 98 Degrees, is back with a new single “That Girl.”

The genuine musician took some time from his busy schedule to chat with me about his latest single, which marks his debut in the electronic dance music (EDM) genre. “I want the fans to keep an open mind and I hope they enjoy it. It’s a fun song and it’s something that I wanted to try. It sounds great and I was fortunate enough to write it with some great writers. It’s a new direction for me and hopefully everybody will keep an open mind and give it a chance,” he said. “A lot of people are getting us confused with the effect that is on the vocal, and think that it is auto-tune, but it is more of a Daft Punk and robotic effect on just the lead vocal, not the hook or the chorus.”

Timmons added, “There is a label group called Dauman Music, and it’s a dance label, and they have been around for quite a while. They have had close to 60 Top 10 hits on the Billboard dance charts. A lot of people have been trying to get me to do that genre of music for a long time. I have had a lot of up-tempo songs on my own, and I never ventured into that market before. In 98 Degrees, we were known as balladeers, and the only dance song we had was ‘Give Me Just One Night (Una Noche),’ so it was something that I have been curiously trying to explore for a while. The guys at Dauman Music offered me the opportunity to do this, and I am excited to be a part of it.”

He noted that he filmed the music video for the song, which is looking great. “The video has a pretty girl in it, and it is a dance song, so they are going to use a lot of ambiance, and it’s just an interesting type of song. I am so excited about this genre, since I am so used to doing pop and R&B. I don’t know what to expect. I’m like a little kid in a candy store. I can’t wait to see what happens with it, since I am tapping into a new audience,” he said.

Just when you thought that one cannot love Jeff Timmons any more, two weeks ago, he wrote a touching post on Instagram, praising his wife Amanda for all of her support, which read as follows: “This woman is so beautiful. Despite what many think, I’m always on the road, hustling, and am alone. A lot. I thank GOD everyday I have her. Always by my side. Always there when not many others are. Amanda you’re incredible inside and out, and I honestly don’t know what I would do without you, my love.”

“Amanda is the best,” he admitted. “Napoleon Hill, author of Think and Grow Rich, studied the most successful entrepreneurs and businessmen over the course of 20 years, and what he discovered was that ‘behind every good man is a good woman.’ I never really believed in it, until I met my wife, and then I realized that she was the source of energy and support, that enables me to go out, sing, write, do music and do TV, and all of these things that I would not be able to do if I didn’t have her in my life. My wife is the best.”

In the future, he has a few television shows planned, as well as a scripted TV show of his own. “I am really getting into music, not only on my own songs, but I will be producing other folks,” he said.

In addition, the male revue, “Men of the Strip,” have four shows taking place at the D Las Vegas Showroom on August 28, 29, 30 and 31, which were produced by Timmons, and Glenn Packard served as their creative director.

For more information on Jeff Timmons, and his new music, visit his official website www.jefftimmons.com.