The Hospitality Industry: Will Government Kill the Industry Before COVID Finished the Job?

DIADROMES-1821, a new app highlighting stories about the Peloponennese inspired by the Greek War of Independence

50 minus two stories about the Peloponnese inspired by the Greek War of  Independence A free app for locals, travelers and history buffs available below  ​The...
Read more
Business

57% Of Brides Don’t Love Their Wedding Rings, Here’s How To Make Sure Your Bride Does

According to a recent survey by David’s Bridal, 57% of women are not satisfied with their wedding rings. A great solution to this dilemma...
Read more
Church

It was 16 years ago today – April 2, 2005 – that His Eminence Metropolitan Gerasimos was enthroned as the Metropolitan of San Francisco....
Read more
Travel

I visited the Holy Land of the first Christians in a pilgrimage of the Holy Martyrs Church before the pandemic and Nov. 2020 Artsakh...
Read more

Considered the “navel of the world” to ancient Greeks, Delphi was more important than Mount Olympus. Delphi was their Vatican.

“Admire oracles” (Χρησμοὺς θαύμαζε) was one of the 147 maxims carved on temples and other structures in the holy city of Delphi. Self-aggrandizement may have been one purpose, but the oracles provided a glimpse into life’s mysteries. “Know thyself” was the first and most important maxim, but, as author Garon Whited has said, “Know thyself isn’t a goal; it’s a road.”

Delphi was more than just the Oracle and became a commercial as well as a religious city of pilgrimage. Temples, sanctuaries, a vast theater with panoramic views of the valley and sacred springs dot the site. With the view from my room at Iniohos Hotel & Restaurant, 700 meters/2,300 feet up Mount Parnassus, overlooking the Pleistos Valley and the Corinthian Gulf, it’s no wonder the Oracle of Delphi could envision the future.

The founding of Delphi is shrouded in mist dating from the 1400s BC. Yet by the apex of the classical era (600s – 400s BC) and even into Macedonian and Roman days Delphi held an unparalleled position – and great wealth ­– within the belief system of the Greek pantheon.

Pythia, the honorary name given to the Oracles of Delphi, held sessions from the stunningly positioned Temple of Apollo. There is evidence of volcanic fumes that seep up from deep in this tectonic active region within the temple that may have induced euphoria, even hallucinations. The Oracle’s pronouncements on the petitions and predictions asked were often cryptic – almost rants – and open to wide interpretations, yet listened to with baited breath and frequently deciphered with auspicious outcomes.

The Thelos at the Sanctuary of Athena (4th century BC) in Delphi is iconic. It was often the first temple many pilgrims saw when entering the vast complex of the Oracle. Considered in its own day a masterpiece of Greek architectural symmetry and polychrome decoration it had 20 outer and 10 inner marble columns. Devotees of Athena still come to pay homage and pray to the goddess.

The UNESCO site of Delphi – a mere 20-minute walk or short taxi ride from the center of town – is extensive and built on the hills of Mount Parnassus, so walking within the site is essential. There is a modest admission charge to the main complex that includes the Temple of Apollo and the excellent Archaeological Museum of Delphi. There is no admission charge to enter the Thelos at the Sanctuary of Athena, which is another easy 20-minute walk down the hill. You do want to see it all so allow yourself at least three to five hours.

The modern Archaeological Museum of Delphi caps this UNESCO World Heritage Site and is recessed into the mountain constructed of the same honey colored marble as the temples. Much of the art were gifts from around the pan-Hellenic world to the Oracle and priests of the temples, or burial objects for those fortunate enough to be interred in this sacred land. It’s superbly arranged in chronological order from 2,000-year-old bronze figurines to the eerily beautiful statue of Antinoos (2nd century AD). This remembrance to a tragic gay love story is sculpted in marble smooth as wax with rivulets of hair delicate and life-like.

On the morning I walked the grounds of the Thelos at the Sanctuary of Athena, a group of women – not a staged event – were dressed in modern versions of ancient robes chanting and meditating to the goddess Athena. It seemed strange at first. Then it all became real; they were giving thanks at the navel of the world to mother Earth.

Iniohos Hotel & Restaurant in the navel of Delphi

Yannis Papathanasiou, second generation owner of Iniohos, is as equally fascinated as I with the interplay of ancient regional culture and history with the development of the region’s food. He decries the weakening of traditional food preparation techniques and availability of such products as cheese from Crete using an enzyme from fresh figs or boiling grapes to syrup creating natural yeast used in their breads.

Yannis shares a feeling frequently expressed to this well-Greek-traveled journalist that Greek tourism in general has not concentrated enough on developing local tourism that promote these interest of popular culture (”people culture”)  – the history, not simply ancient, and local foods rarely found outside of the region.

Shortly after lunch, Yannis was off to food markets in Athens – 200 plus mile round trip – to pick up special ingredients from trusted purveyors and special spices from India. He didn’t arrive back until well after midnight. India?

A lunch of flaky spiral spanakopita, local grilled smoked sausages, tomato and feta salad all seemed very typical for a traditional Greek restaurant. Yet then an aromatic plate of Indian squash and peppers arrived. The executive chef at Iniohos was from India, and there’s a reason.

Delphi was a magnet for the entire pan-Hellenic world beyond what we now know as Greece. It was always an international city bringing together believers in the Pantheon. Today tourists from China, India and Japan flock to marvel at Delphi. After all, at one time these regions were contemporaries – allies and enemies – always tied by the commerce of the great trade routes.

Did the Oracle of Delphi predict Argyriou Winery?

Within the rustic stone and wood elegance of the lounge in the 1872 farmhouse, Nikos Argyriou, handed me a glass of Pinot Noir, not usually one of my favorites. I inhaled. My head was filled with the bright aromas of a basket of late summer berries – blackberries, blueberries, sour cherries, red currents, and cranberries. I didn’t want to take my nose out of the glass as each swirl produced more perfume.

Then a real surprise occurred. Like the legendary volcanic fumes that influenced the Oracles of Delphi, hints of sweet tobacco rose from the berries. The combination of aromas were extraordinary.

I took a sip and was rewarded with intense flavors on my palate, dry, but not acidic, and smooth as silk. Rarely does a dessert pop into my head as a food pairing with wine but at that moment I craved a fresh warm cherry pie. Of course, full flavored hard cheeses, ripe stoned fruit – fresh apricots for instance – and wood fired roast meats with Argyriou Winery’s 2014 Pinot Noir (aged 10 months in oak) would make an excellent meal especially given the setting.

Argyriou Winery and Wine Tasting Guest House is located within the village of Polydroso, about a one hour drive from Delphi. The original 1872 stone farmhouse blends right into this postcard perfect village on the north-western slopes of Mount Parnassus. The main feature of the area is the abundance of water creating a lush ecosystem. Polydroso is within the National Park of Parnassus, which is a protected biosphere.

Nikos Argyriou was born in Polydroso and is the 3rd generation of his family in agriculture and livestock breeding. Nikos is not the only Greek to transform the age-old tradition of making wines for home consumption and morphing that into an estate winery. The winery today comprises parcels totaling over 290 acres. The ecological position of the region creates mountain air currents essential to prevent deadly diseases to the vines.

A variety of wine related events are held at the guesthouse, which includes six spacious rooms and a wine cellar tasting room. Although the winery is not open to public wine tastings, guests of the Argyriou Winery and Wine Tasting Guest House have the opportunity to arrange a variety of wine tastings and pairings with the local cuisine.

Sampling three more Argyriou Wines did nothing to damper my growing interest in this winery.

Malagousia from the Delphi area grows at 450 meters/1,500 feet elevation on mountain slopes of clay with fine drainage. This ancient white grape, thought to have gone extinct, was rediscovered in the 1970s and is now one of the most popular for wine in the nation.

It has an aromatic bouquet of white wild flowers on a dry summer day with a touch of lemon zest. In the mouth the pleasant undertone of lemon zest continues to scent the light dry grape into herbal notes of lemon grass and lemon thyme. The finish is smooth and slightly astringent. It would pair well with grilled seafood and mild cheeses.

White Oracle Monteio is 40% chardonnay and 60% assyrtiko. The dry sea grass notes of Santorini Island assyrtiko grapes cuts through the traditional sweetness of chardonnay like a cocktail creating a full bodied white. There was an aroma of sweet butter and unripe figs. In the mouth caramel flavors coated the palate with hints of ripe figs, mild cheese and white currents. The flavors continued silky smooth down the throat. It would pair well with cheeses, pastas with white sauces and seafood.

I make no excuses to being partial to red wine. I enjoy the full flavor of dry aromatic liquid fruit. Argyriou Winery’s 2014 Pinot Noir had already changed my perception of that grape. So, I did not need to be predisposed to Red Oracle Monteio (2014) – 80% Cabernet, 20% local Mavroudi. Cabernet ranks among my favorite reds, and the deep color and rich ripe fruitiness of Mavroudi are made to pair. Yet like with the Pinot Noir I was not expecting an extraordinary taste experience.

It had the rich flavors of ripe berries, hints of tobacco, unsweetened chocolate yet subtle aromas as well of cloves, allspice and nutmeg emanating as if used as a rub for slowly roasting meat. My palate was bathed in these aromas as they blended with roses and ripe plumbs. Balanced tannins kept earthy and sweet in check as the wine slid down the throat dissipating its complex silky liquid flavors.

Experiencing the mysticism of Delphi and the extraordinary Argyriou Winery, I’m reminded once more of Garon Whited, “Learning about myself changes me, forcing me to learn more.” The millenniums old Greek civilization has much to teach – listen to your inner oracle.

When you go: Phocis Regional Unit includes Delphi, Polydroso, the National Park of Parnassus, with a major winter ski center, and the north coast of the Corinthian Gulf. It is best explored by car, but bus transportation is available from Athens and other major Greek cities.

Special Thanks: Iniohos Hotel & Restaurant, Delphi and the Argyriou Winery and Wine Tasting Guest House for their hospitality. Travel arrangements were facilitated by the MTC group, Athens

Travel with Pen and Palate to Greece and the world every month in the Hellenic News of America. 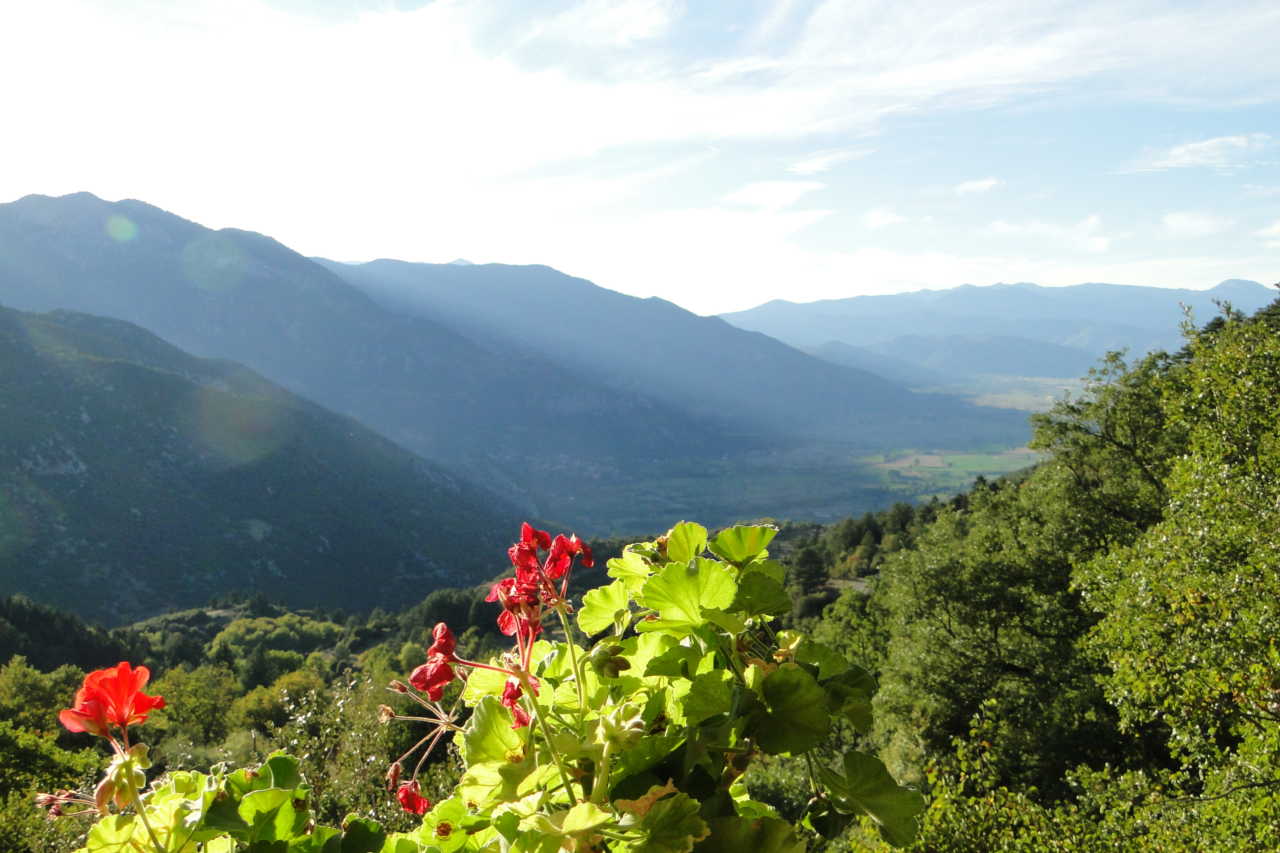