Father Alex and Presbytera Xanthi Karloutsos to be recipients of 2018 Athenagoras...
Featured 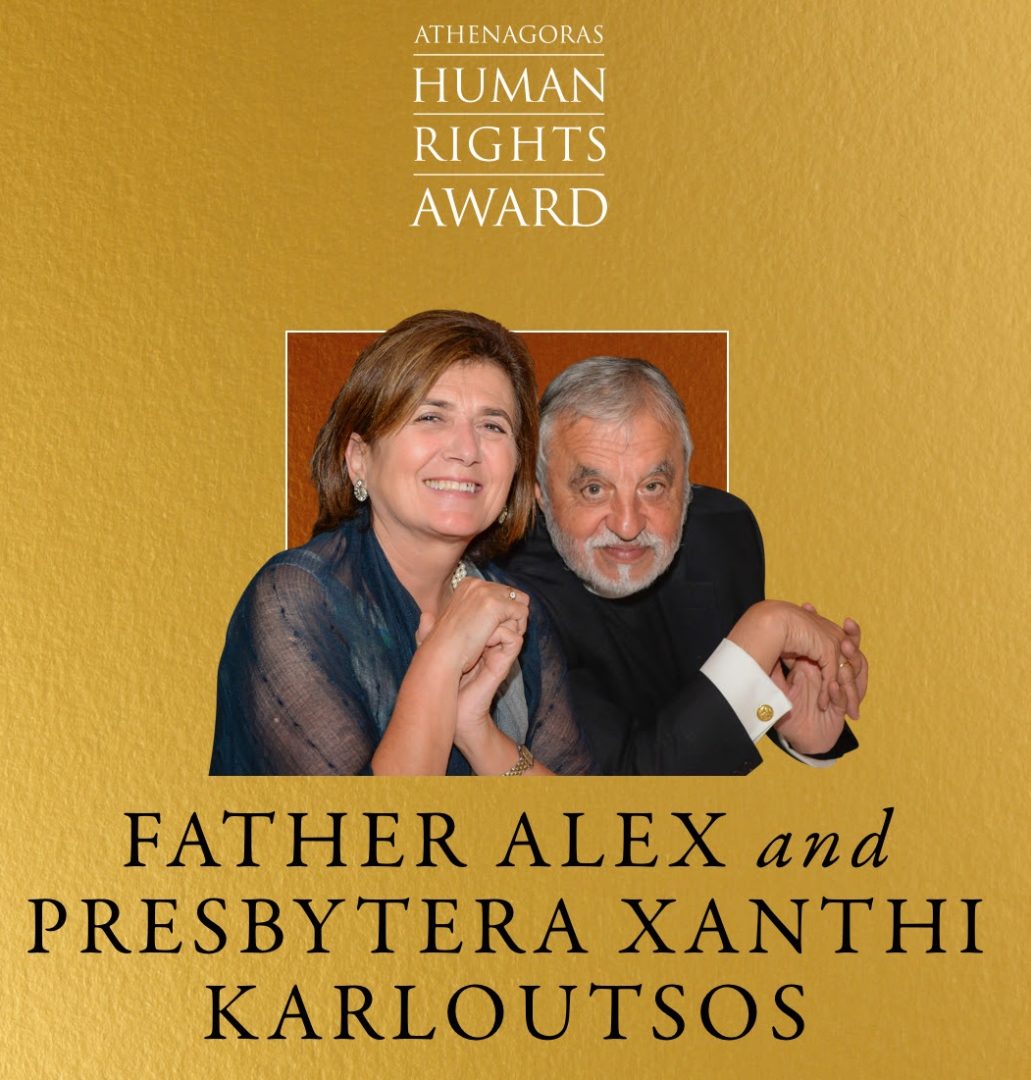 Father Alexander and Presbytera Xanthi Karloutsos will be honored as the 2018 recipients of the Athenagoras Human Rights Award. The Award will be presented by the Order of Saint Andrew, Archons of the Ecumenical Patriarchate, at the organization’s annual banquet Saturday, Oct. 27, 2018 at the New York Hilton Hotel.

The Award, established in 1986, is presented annually to a person or organization that has consistently exemplified by action, purpose and dedication concern for the basic rights and religious freedom of all people. It is named in memory of Ecumenical Patriarch Athenagoras, who reigned on the Ecumenical Throne from 1948 until his death in 1972. Prior to his election as Ecumenical Patriarch, he was the second Archbishop of North and South America.

Father Alexander and Presbytera Xanthi have been a true partnership and team well-known throughout the Archdiocese and the Orthodox World. Their advocacy on behalf of the Ecumenical Patriarchate is legendary.

Fr. Alexander (better known as Father Alex) has been an assistant to three Archbishops. Currently he is the spiritual adviser to the Order of Saint Andrew, Archons of the Ecumenical Patriarchate in America, and to Faith: An Endowment for Orthodoxy and Hellenism. He serves as special assistant to the Archbishop working as liaison with heads of churches, the White House, the Congress, state and local officials, Greek American organizations, political action and religious freedom and human rights groups. He is also the Orthodox chaplain for the Port Authority of New York and New Jersey. Together with his son-in-law, Father Constantine Lazarakis, he pastors the Dormition of the Virgin Mary Greek Orthodox Church of the Hamptons. 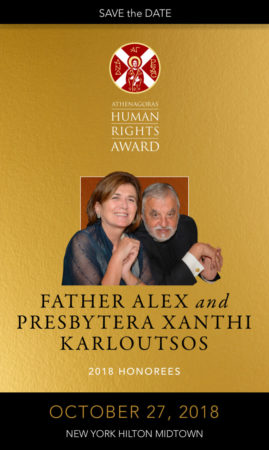 Father Alex previously served as the executive director of Leadership 100, (1986 to 1992 and 1999 to 2004), and was appointed by Archbishop Iakovos as the first vicar of public affairs of the Greek Orthodox Archdiocese of America in 1985, holding that position simultaneously until 1992 when he was appointed special assistant to His All-Holiness Ecumenical Patriarch Bartholomew at the Ecumenical Patriarchate of Constantinople.

Father Alexander first served as an assistant priest at SS. Constantine and Helen in Chicago in 1970 where he was active in youth ministries. He was appointed Archdiocesan Director of Youth Ministry in 1974, moving to the Archdiocesan headquarters in New York. In 1978, he was appointed Archdiocesan Director of the Office of Church and Society where he served until 1980 when he assumed the directorship of the newly established Department of Communications.

Presbytera Xanthi Karavellas Karloutsos, who has more than 46 years in community service with young and old alike, presently serves the Greek Orthodox Archdiocese of America as executive assistant and coordinator of the Offices of Public Affairs, Faith Endowment and as Office Manager for the Order of Saint Andrew the Apostle, Archons of the Ecumenical Patriarchate.

Born in Corfu, Greece, she was raised in Washington, D.C. During her high school years, her parents developed a cardiac care and surgery program with the National Institute of Health for children from Greece in need of heart surgery and health care. Upon completion of her high school studies at Montgomery Blair High she studied interior design at the International School of Interior Design. In 1970, she began her career as a Presbytera in the Greek Orthodox Church. Four years after serving the Parish of SS. Constantine and Helen in Chicago, she and her husband moved to New York City to serve the Archdiocese there.

In 1974, she was appointed as adviser to the Archbishop’s Youth Ministry Office with an acute interest for children with special needs and troubled youth. When her children began attending the Public Schools of Pelham, New York, she devoted her time and talents becoming an active advocate for children’s educational needs by serving two respective terms on the local PTA as co-president of both Pelham’s elementary and high schools.

In 1989 she accepted the position of director of the Hellenic American National Action Committee Social Services in the Bronx, where she became involved and exposed to the greater community’s less fortunate families and the struggle for disadvantaged children and their parents. Along with her husband, from 1992-1996, they served as personal assistants to Ecumenical Patriarch Bartholomew. While Father Alexander served as public affairs officer, Xanthi immersed herself in the needs and educational concerns of the young people of the dwindling historic Rum (Greek) Christian Minority in Istanbul.

She also serves on the board of the Beau Biden Foundation and Amani Global Works, which focuses on the health needs of children on the Island of Idgwi of the Democratic Republic of the Congo and on HOPE, a newly established ministry on Long Island’s East End which hopes to address the scourge of human trafficking.

She, along with Father Alexander, have been instrumental in fundraising efforts for the ministries and beautification of Long Island’s jewel— the Dormition of the Virgin Mary Greek Orthodox Church in Southampton. They are now involved in efforts towards the rebuilding of Saint Nicholas Greek Orthodox Church and National Shrine at the World Trade Center.