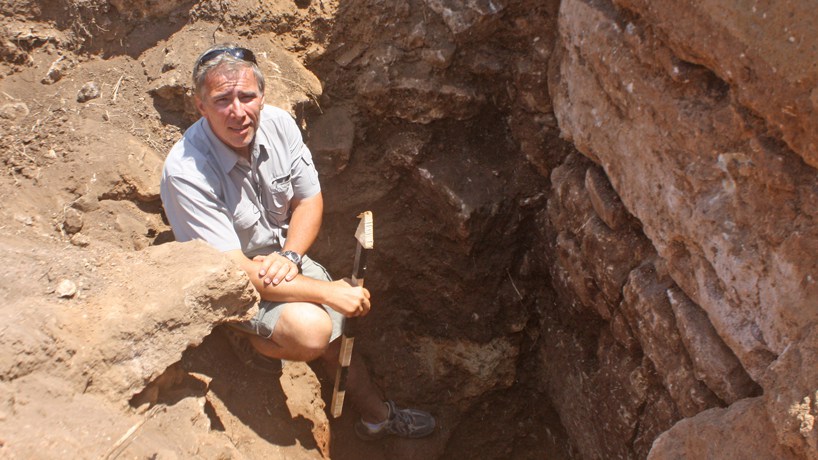 The Royal Society of Canada became the latest group to recognize University of Missouri–St. Louis Professor Michael Cosmopoulos for more than 30 years of contributions to the study of ancient Greek civilization when it inducted him into the society during a special ceremony on Nov. 24 in Winnipeg, Manitoba.

The Royal Society was established in 1883 as the National Academy of Arts and Sciences of Canada. Induction to the Royal Society is the highest honor a scholar can achieve in the arts, humanities and sciences in that country.

“Michael B. Cosmopoulos is an internationally known archaeologist and classicist whose pioneering and multi-disciplinary approaches have impacted deeply our knowledge of the Classical world,” read the citation of the Royal Society of Canada. “Through his sophisticated theoretical models and important archaeological excavations, he has developed new ways of understanding Greek religion (especially the origins of ancient mystery cults) and political history (especially the emergence of states and social complexity).”

Cosmopoulos, the Hellenic Government-Karakas Foundation Professor of Greek Studies at UMSL, had his first professorship at the University of Manitoba, where he taught from 1989 to 2001.

“I look upon those years with nostalgia,” said Cosmopoulos, who was born and raised in Athens and first came to North America to pursue his doctorate at Washington University in St. Louis in 1985. “Canadians are wonderful people, warm and hospitable. Winnipeg was a great city – the snow aside!”

Even after he came to UMSL in 2001, he maintained connections in America’s northern neighbor, evaluating applications for Canadian funding agencies, assessing articles for Canadian scholarly publications and training Canadian students in the field.

Cosmopoulos directs the Iklaina Archaeological Project, which is funded through UMSL’s Greek professorship as well as through major grants from the National Endowment for the Humanities, the National Science Foundation and the National Geographic Society. He also teaches Greek history, culture, religion, technology, archaeology, art, language and mythology and organizes the activities of the Greek professorship.

The Iklaina site is a palace that dates to the time of the Trojan War, between 1500 B.C. and 1200 B.C. It’s believed to be one of the sites mentioned in Homer’s epic poem, The Iliad, as one of the capitals of the Greek kings who fought in the war.

At Iklaina Cosmopoulos studies the processes of state formation in the western world.

“It’s an exciting case of mythology overlapping with history and archaeology,” Cosmopoulos said.

The discoveries that have been made there have transformed what had previously been believed about ancient Greek history. Cosmopoulos’ work has been featured prominently in the national and international press, including on PBS and the National Geographic Channel.

“I can’t say enough about the work that Michael’s done,” said colleague Patti Wright, associate professor of anthropology at UMSL. “We’ve had a number of students who have gone to his field school in the summer, and they love the experience. He’s also a prolific scholar, who’s becoming really well known internationally and bolstering the name of our university in Europe and now in Canada.”