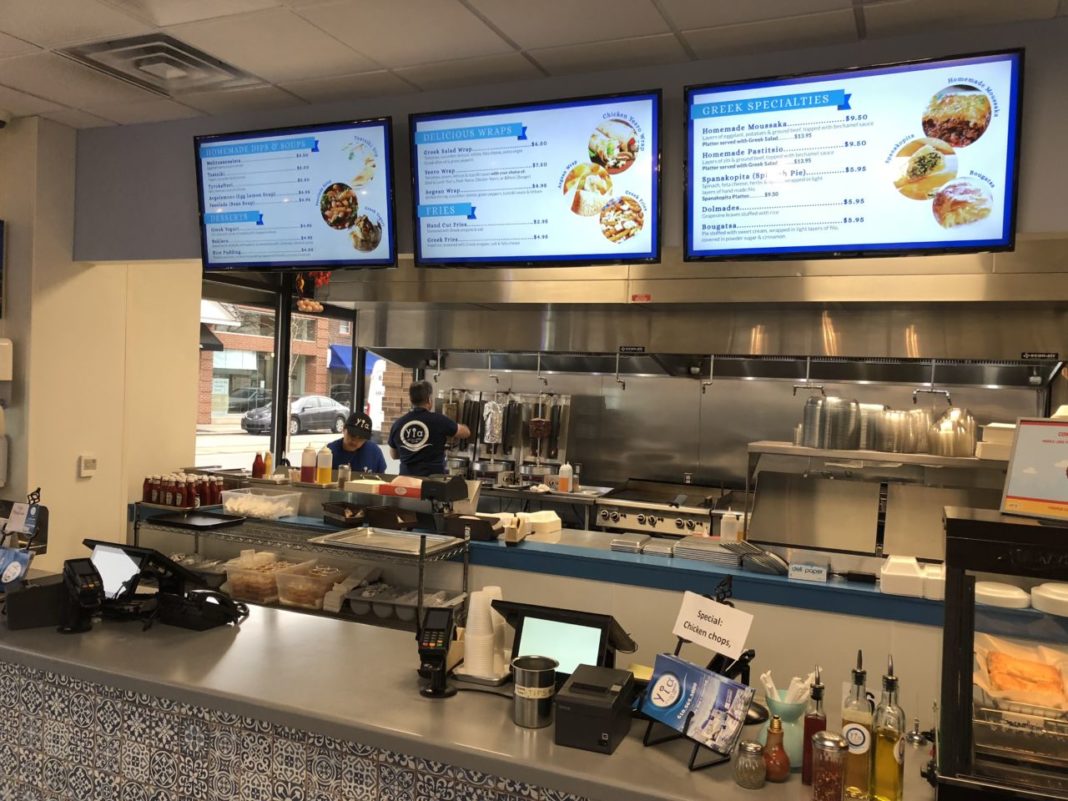 The charming borough of Media, Pa. has become a restaurant haven, playing host to a wide range of ethnic cuisines.

Now a popular casual Greek eatery has joined the mix and it’s quickly rising in the ranks as a destination for hungry visitors.  Yia (It’s All Greek to Me!) opened in the county seat about eight months ago at 300 W. State Street.

The décor is causal but authentically Greek.  The chairs arrived from a Greek restaurant. Artwork and photos depict island scenes from the homeland and the sparkling restaurant is painted a pleasant blue and white, the colors of the Greek flag. Yia, in fact, means “hello” in Greek and owner Sotiris Mpabalis wants to make sure you feel welcome in his small Greek Island taverna tucked away in an end corner of Media’s busy thoroughfare.

The restaurant’s mission, according to its website, is to “use time-honored methods and family recipes to make real food with integrity, taste, and freshness.”

Mpabalis and his business partner, Greek American Marina Bottos, put special emphasis on the freshness of the food in this age of frozen processed fast food.

“Everything is fresh here,” he says proudly.  “The customer can sit in front of the counter and see what we are cooking for them.”

The meat is bought fresh every day. The French fries are hand cut daily. Mpabalis, who comes from Athens, has been in the United States for five years. He remembers his first experience with fast food.  “The quality of the food was not fresh, from the pizza store, from the burger store, everything was frozen. That made me want to do something with the fresh food,” he says.

Americans are embracing the health benefits and good tastes of the Mediterranean diet and respect restauranteurs who deliver those qualities with fresh, well-prepared food.

This type of food is second nature to Greeks, who embrace family recipes and home-cooked meals. “We honor our Greek heritage and take joy in bringing our favorite foods to you,” states Yia’s website.  Mpabalis came to America with his wife. Today, she cooks in the restaurant, bringing her cooking experience from Greece. “All the women in Greece they cook in the home. We go out for dinner, but then it’s back to eat after dinner,” he jokes.

The restaurant’s popularity has soared in Media since it first opened.  “I think they like the Greek food because it’s a little bit different,” Mpabalis says. Business gets better every day, spread by word of mouth, he says. In fact, the online restaurant review site Yelp listed Yia as one of the 10 best restaurants in Media. Just as important, his Greek customers like his food, a native seal of approval.

Take a quick tour of the menu and you can see why. The food is native to western Greece. Included are the favorites Americans will find at their local Greek Festival:  The Yeero (gyro), delivered using pork, beef, chicken or vegetarian; Souvlaki (chicken, pork or shrimp skewers), homemade Moussaka, Pastitsio, Spanakopita, and Dolmades (grapevine leaves stuffed with rice).  There’s more here, too. Sausage on pita bread, a Greek burger known as a Bifteki, wraps and a range of unique Greek salads.

The restaurant offers catering in addition to eat-in.

The casual atmosphere ensures quick service and a quick meal.  “You come in and eat and in a half an hour you are out of here. You are served, you eat, and then you go,” he says.  No white tablecloths or wine, but good, affordable food, a restaurant for everyone.

Mpabalis had a business in Greece for 25 years and also ran a restaurant there. He came to the United States following the economic collapse in Greece and decided a restaurant would be the best business to open here. While he’s proud of Yia’s success, it has not been easy for him and his 10 employees.  “I’m here 14 hours every day, seven days a week. We work very hard,” he says.

Looking ahead, there are plans to add more foods to the menu next summer as the owners try to anticipate the American palate. “For example, we never used hot sauce. Everyone here asked for hot sauce. OK, we put out hot sauce,” he says.

There is a hope of opening a second restaurant one day, with the ultimate goal of creating a chain of restaurants, making Yia a recognized brand name.

In the meantime, Yia’s mission will continue in Media, an ambassador delivering the delicious tastes of Greece to its hungry customers.