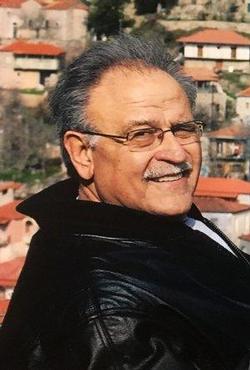 Michael was the son of Rev. Panayiotes Frentzos and Helen Frentzos.  He had two brothers Tommy and Jimmy.  Michael was born in Arcadia, Stemnitsa, Greece.  Because of the war, he experienced difficulties in life.  He experienced hunger when the Germans occupied Greece.  He witnessed people dying from hunger.  When he was a young boy, Germans made he and his family witness the executions of up to a thousand people.  Michael and his brothers, to survive hunger, moved to Sparti.

Michael’s father came to America in 1937.  The Orthodox church was recruiting priests who had teaching credentials to come to America for a three-year contract to establish parochial schools for the Greek Orthodox Church.  His father taught theology and Byzantine music at Harvard.  He also taught at the Greek Orthodox Theological Seminary.  He continued his work through different assignments across the United States until his death in 1970.  Michael’s mother was educated and taught at schools near the various assignments his father had in Greece.  She remained in Greece with the three children.  In 1942, she was killed during World War II by enemy fire.

After World War II was over, the communists with the help of Russia and all the other communist countries, tried to make Greece a communist country.  But the Greek people fought back so hard they produced a civil war that lasted for five years.  In the meantime, Michael and his brothers experienced more hunger.  He had no clothes and witnessed many killings. In 1945, Michael was shot and burned by a flaming hand grenade.  Due to this, he lost his sight in his left eye.  In that episode, his best friend was killed and cut in half.  Eighty other people were killed, and a couple of hundred were wounded.

In 1950, Michael immigrated to the United States, where he later became a naturalized citizen.  He graduated from Riverside High School in Painesville, Ohio.  He attended Kent State and Ohio University.  He was inducted into the US Army in 1955 and was stationed in Karlsruhe, Germany.  That is where he met his first wife, Constance Rumbold, a recreation worker for the Special Service Division of the US Army in 1957.  They married on November 9, 1958 and moved to South Pasadena, California.  They had three daughters.

In 1964 he was Chapter President of the Pasadena AHEPA, Rose Bowl Chapter #373, the Greek American fraternal organization. He was Parish Council President of Saint Anthony Greek Orthodox Church in Pasadena from 1967 to 1968.

After he married, he joined a big shoe corporation.  He worked in different levels of the shoe industry from salesman to management. After thirteen years of marriage, he and his wife divorced and he later married Doris Speck.  They have remained together since 1971 and have been residing in Pomona, California.

From 1983 to 2007, Michael was active at Saint Spyridon Greek Orthodox Church in Upland, California. He was a board member and Parish Council President for a number of years, specifically during the time when Father Kosta Douvikas was brought from Greece by Metroplolitan Anthony of blessed memory, at which time the Church membership grew from a few dozen to about 150. In 2007, when Father Kosta was transferred to Saint Nectarios Greek Orthodox Church in Covina, Michael started helping that community as well. He was a board member and Parish Council Vice President of Saint Nectarios Church for many years.

In December 2000, Michael had open heart surgery to unclog five arteries and replace a valve.  In 2011, he was diagnosed with Renal Cancer (kidney).  He had his kidney removed and remained cancer free until August 2015.  He bravely fought a long battle with cancer and is now pain free.

He was preceded in death by his brother Jimmy Frentzos and his nephew Panos Frentzos.