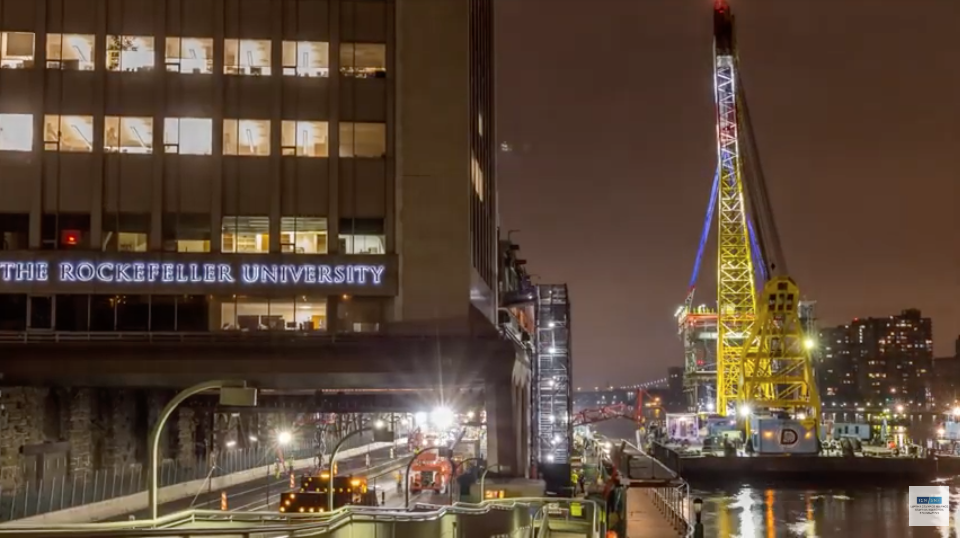 On Friday, May 17, 2019, The Rockefeller University in New York City dedicated its new Stavros Niarchos Foundation–David Rockefeller River Campus, the culmination of a five-year period of intensive planning and building, and a testament to a fifty-plus-year friendship.

The Stavros Niarchos Foundation–David Rockefeller River Campus expands the grounds of the renowned biomedical research university by two acres, and adds several new buildings with state-of-the-art laboratory facilities designed for complex and advanced biomedical research. The new construction occupies the airspace over FDR Drive, a busy roadway situated between the campus and the East River. The 135,600 square feet of new building space have the capacity to accommodate more than 600 scientific staff and the flexibility to be adapted to research needs as they evolve. The new addition extends the inviting green spaces that weave together Rockefeller’s campus, providing new loci for scholarly communities to form.

The decision to take on the serious technical challenge of building over a busy roadway was the outcome of Rockefeller’s commitment to prioritize the needs of its community of researchers, while also respecting the needs of the surrounding neighborhoods. The university found that the layout of tall tower-style laboratory buildings, segmented into smaller floors, had the effect of isolating each lab. A horizontally oriented building, however, that could accommodate large, open floors shared between multiple labs and common spaces would require space, and available space was not a luxury that the Manhattan institution enjoyed. Fortunately, David Rockefeller had had the foresight for the university to acquire the air rights over FDR Drive in 1973 and the perseverance to clear subsequent hurdles to making use of it. Huge prefabricated structural elements were brought in by barge from the river, and were moved into place during the short nighttime windows when FDR Drive would shut down and the tides were cooperative.

“This project is not simply about building new facilities,” said SNF Co-President Andreas Dracopoulos. “It is about giving one of the world’s finest communities of researchers the capacity to work and collaborate in a way that maximizes their potential. This transformational extension and upgrade of campus will meaningfully enhance the Rockefeller University’s ability to contribute to science for the benefit of humankind.”

Designed by Rafael Viñoly Architects, the project encompasses a conference and an academic center, and a dining commons, in addition to cutting-edge new lab facilities. Beyond the outdoor green spaces added to campus, the project also includes the improvement and beautification of the stretch of the East River Esplanade that runs along the river adjacent to the Stavros Niarchos Foundation–David Rockefeller River Campus. A university endowment will provide for its maintenance into the future, providing much needed public space for the surrounding communities.

SNF has provided repeated support to The Rockefeller University since 2001, including for the Clinical Scholars Program, which aims to train physician-scientists.

The Stavros Niarchos Foundation (SNF) is one of the world’s leading private, international philanthropic organizations, making grants in the areas of arts and culture, education, health and sports, and social welfare. Since 1996, SNF has committed more than $2.7 billion through more than 4,500 grants to nonprofit organizations in 124 nations around the world. The Foundation funds organizations and projects that are expected to achieve a broad, lasting, and positive impact for society-at-large, and exhibit strong leadership and sound management. The Foundation also supports projects that facilitate the formation of public-private partnerships as an effective means for serving public welfare.